There are four new cases of Covid-19 in New Zealand today, two linked to the Auckland August cluster and two imported.

Two of the four new cases are people from the Auckland community who are linked to already identified cases in a sub-cluster of people who visited a family grieving a dead relative. The sub-cluster is linked to the Mt Roskill Evangelical Fellowship group.

The other two cases are people who are in managed isolation after arriving from India: a man in his 30s and a woman in her 50s who flew into Christchurch on 27 August and are in quarantine. Both tested positive for the virus on their 12th day in isolation.

Hipkins said it "would be wrong" to stop people with legitimate rights returning to New Zealand from India just because of the country they are in - he was answering a question on whether the government has considered banning flights from India given dozens of recent imported cases have come from the sub continent.

There are now 120 active cases (39 imported cases and 81 community cases), and three people in hospital with Covid-19, two in ICU at North Shore and Waikato hospitals. There are 72 people at the Auckland quarantine facility, including 56 people who have tested positive for Covid-19 and their household contacts.

Contact tracing teams have identified 3372 close contacts of known cases, and 3354 of them have been contacted and are self-isolating. Tracing team staff are continuing to contact the remaining 18 people.

At this afternoon's media conference, Chris Hipkins who is also the education minister urged parents to send their children back to school so that they could get back to learning. He said it was safe for children to return.

When asked how long the cluster and sub-clusters in Auckland will push back the move to alert level 1, Hipkins said: "We are more likely to see new cases out of this sub-cluster but it would appear that we have managed to get it early which means at this point we are seeing any other cases popping up associated with the sub-cluster that aren't already identified contacts.

"When we look at the alert levels and changes to the alert levels, one of the questions we always ask is are all the new cases popping up connected, are they people who are known contacts, are they in isolation, and thus far with this sub-cluster that's looking quite promising."

He said a decision on whether New Zealand will move to alert level 1 after 16 September will be made next week.

Retesting being urged for church members and contacts

The ministry is still urging anyone who is part of the Mt Roskill Evangelical Fellowship group to self-isolate and to be retested for the virus by tomorrow.

"As far as we can tell they were unaware they had been infected and were incubating and spreading the virus at the time. This underscores the importance of close contacts following the public health advice they're given which includes strict self-isolation even if they don't have symptoms, and even if they have returned a negative test," the ministry said in a statement.

"We are aware that church leaders are actively encouraging all members of the congregation to retest ... and to comply with other public health advice.

"As a result of this cooperation, by 8am today, labs had registered new tests for 64 percent of the congregation (213 of the 332 people)."

Officials know of 101 close contacts to the sub-cluster and are making daily calls to them to check if they have any symptoms.

"Teams engaged in these checks are reporting a high degree of compliance."

An extra testing site had been set up at the Mt Roskill War Memorial, and two testing facilities have been dedicated to people connected to St Dominic's Catholic College, but there is good testing coverage widely available in Auckland, the ministry said.

By 11am, 561 tests had also been taken from people connected to St Dominic's Catholic College, which are being prioritised at laboratories. The ministry said most of these people will be casual contacts, and don't have to isolate if they don't have any Covid-19 symptoms.

A deep clean of St Dominic's has been completed and all staff and students are being tested. 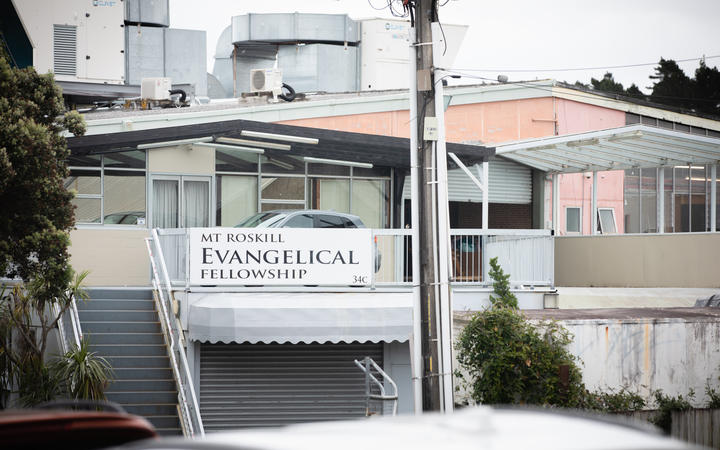 Hipkins said the government was not considering taking punitive action against members of the Mt Roskill Evangelical Fellowship cluster who possibly flouted rules or refused to pass on information.

"The last thing I would want is people sitting there thinking 'goodness me, I'm in a bit of trouble here, I'm going to stop talking and I'm going to stop sharing information because I don't want to get into more trouble'. The reality is the virus is the problem, not the people, the people are the answer."

But for recidivist misinformation spreaders, Hipkins said he may consider punitive options if it continued and became a bigger problem.

On misinformation and how to break through to people who believe Covid-19 isn't as bad as it is, Hipkins said: "I think we do need to accept the science, watch the TV news and look at what is happening internationally and at the countries where Covid-19's gotten out of control, where deaths are a daily occurrence.

"We are very fortunate in New Zealand that because of the collective efforts that we have taken, we are not seeing that in New Zealand.

"What that means though is some people are becoming more sceptical as time goes on. The reality is though just look at what's happening internationally, you can see that this is very very real, the virus is very very deadly, there is no vaccine for it so people can't protect themselves from it.

"The best protection that we all have is through our collective efforts to give the virus nowhere to go."

On whether the government had been in discussions with New Zealand Rugby about possibly hosting the Rugby Championship, Hipkins wouldn't comment on where the process was at but said there had been "some very good discussions".

"In any such arrangements, are the quarantine arrangements sufficiently robust, that they are meeting at least as good a standard as our current managed isolation and quarantine facilities and so that's the capacity in which I get consulted in as minister of health and ultimately I will be one of the ministers that has to sign off on any final arrangement before the go button was pressed on that."

Yesterday, the Ministry of Health confirmed six new cases of Covid-19, all in the community.

More than 2.17 million people have downloaded the NZ Covid Tracer app and there have been more than 49.7m poster scans.