A North Island brown kiwi rescued from a drainage sump on the side of State Highway 3, near Tongaporutu in Taranaki, is being described as a back-country battler, full of fighting spirit. 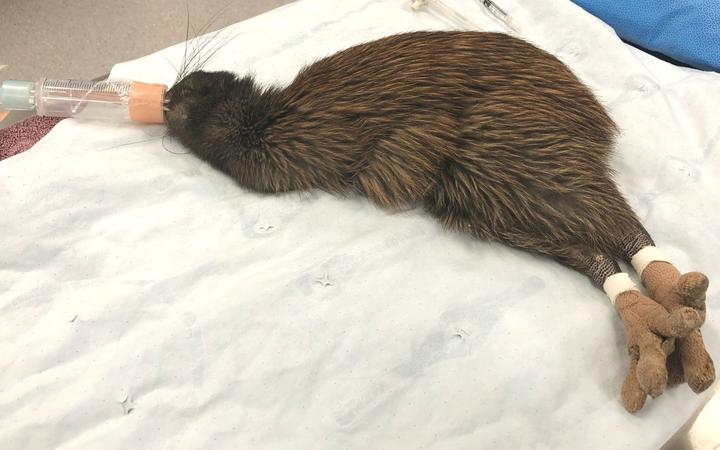 It is believed the battered bird scrambled down a bank into a culvert before becoming stuck in the sump.

He owes his survival to two eagle-eyed roading inspectors, Logan Turner and his colleague Isaak Ryan from infrastructure company Downer, who spotted the stranded bird.

Turner said they got a bit of a shock.

"It was the first time I'd seen a kiwi in real life, so it was pretty cool. I have never come across wildlife while inspecting culverts before."

After contacting their supervisor, the men called the 0800 DOC HOT line to alert DOC rangers and stayed on advise on how remove the metal grate and access the bird.

DOC Ranger Alison Evans, clad in overalls and elbow-length gloves, clambered in and plucked the kiwi to safety.

"It had obviously had been trying to get out for some time because its feet were quite damaged. It had been stuck in there for a number of days.

"It was underweight, cold and suffering from exhaustion and didn't have any objection to being picked up. It seemed almost relieved to be rescued," she said.

Evans said the bird owed it's life to the roading inspectors.

"I think it's a very lucky kiwi that it's got spotted and we're very grateful to the guys from Downer because they did all the right things."

The bird wasn't leg-banded or microchipped, suggesting it was a wild kiwi and not bred in captivity or released into the conservation area.

It was transported to Massey University's Wildbase Hospital, where Evans said it appeared to be doing well.

"He's a real little battler and he's obviously got a strong spirit in him and he's been through a number of procedures already and he's been improving gradually day by day."

Wildbase Supervisor Technician Pauline Nijman said the nails on each of the kiwi's feet were worn down to the bone.

During its several weeks of care it had had several "pedicures" to clean the nail and bone, and had x-rays and blood samples taken.

"This kiwi is such a fighter! We are happy to report the little superstar is eating well in hospital and after the first week - when it was touch and go - he has started to venture around his room, exercise, forage and gain some much needed weight. But it's going to be a long journey," Nijman said.

It will be several weeks before Wildbase vets will know if the kiwi has a chance of long-term survival.

If he can be released back into the wild, DOC will liaise with iwi on arrangements and be returned somewhere near it was rescued.