New services to improve emergency and acute care of children at Christchurch Hospital will not open because there is no money to staff them. 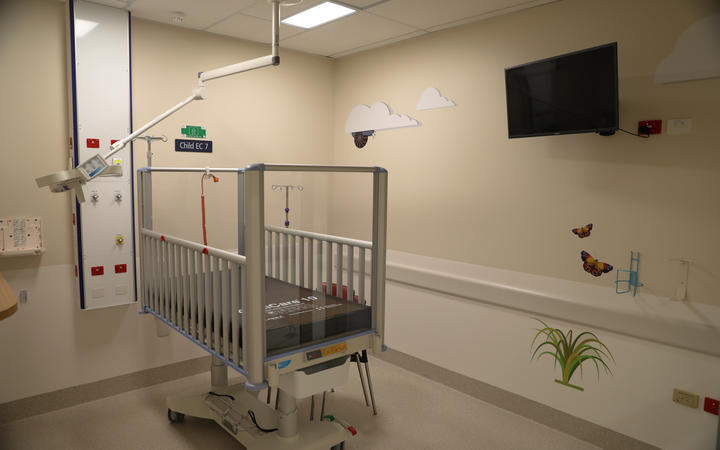 The children's ward at the new Hagley block which is set to open in November. Photo: RNZ / Simon Rogers

The existing Emergency Department Observation Unit will also have to close for the same reason.

The spaces built for the three units in the $500 million Hagley block will remain largely empty when it opens in November.

Senior clinicians said it was "disappointing" and that they and hospital executives were now working out how to mitigate the risks of overcrowding in the emergency department, and of having to channel more patients into hospital inpatient wards.

The board chair, and the Crown monitor at the district health board (DHB), promised last month that services would not be cut under measures to find $60m of government-ordered cost savings.

This came amid mass resignations by executives, and vociferous staff protests.

However weeks earlier, RNZ has now learned, the DHB told senior clinicians there was no money for extra staff for the two new children's units, nor for the replacement observation unit in the Hagley hospital.

This will most affect medical services to children, the elderly and mental health patients.

In addition, staff have been told a new children's high-care unit as part of Intensive Care faces the same fate.

"We've tried ... really hard to get the funding, but owing to the financial issues in the DHB at the moment, we haven't been successful," Gilbert said.

"So what we're doing is we're working really hard to try and lessen the impact of the care on the children.

"I mean, they'll still get seen and all of that sort of thing, but there's no doubt that a paediatric-friendly and specific environment is considered international practice, and it's certainly what we were aiming for."

The space was meant to be shared by ED and paediatrics - which will still run an admitting unit there as planned - with overlapping care.

Instead, children will carry on being seen alongside adults, as happens now.

"You can have a five-year-old in a cubicle next to a drunk that's swearing," one doctor told RNZ.

An aim at the new Hagley hospital was to separate children from that, and from adults displaying mental health problems.

The other part of the new Hagley hospital that will remain empty is the ED Observation Unit (EO).

The existing unit in an old block will close, without being replaced at Hagley despite a new, expensive space having been built for it.

"We can't staff it at the moment, so we can't open it," Gilbert said.

"So that will stay empty until we can rectify the staffing situation."

He had needed 15 staff, including 12 nurses, to open both the EO and children's ED, but the DHB told him in July there was no money.

The government and Health Ministry have sung Hagley's praises, and shown off its 3000 rooms to media, despite it being 28 months late opening and tens of millions of dollars over budget.

In mid-August, the DHB chair, Sir John Hansen, told staff: "I am also delighted to report that the migration into Hagley is close at hand headed by Mary Gordon.

"Although significantly delayed we will be moving into the newest and best hospital building in New Zealand."

Sir John also said: "I want to assure you that cutting services will not form part of the board's deficit reduction strategy."

Staff have expressed disbelief at this.

Dr Gilbert told RNZ the Emergency Observation unit's 12 beds were particularly good for keeping the elderly or mentally unwell in a quiet place overnight or a bit longer, to assess them, without having to admit them as inpatients, which was proven to erode the chances of a good outcome.

With the EO closing, some would have to stay in ED beds - six beds during the day and eight at night would be set aside for this - and others admitted to wards.

"One of the other effects we're anticipating is there may be a degree of overcrowding in the ED but we're still working through exactly how are we going to operationalise that.

The executive managers were "on the same team" and had been informed of the implications for care, Gilbert said.

Clinicians had asked managers to review the staffing levels before next winter, when ED logjams occur.

The Hagley ED is larger than the existing ED, but Gilbert has only the same number of staff to man it, creating a shortage.

Clinicians are in the middle of planning how to shift into Hagley, a huge undertaking, complicated by the exodus of seven of the 11 top DHB executives - though some are waiting until the migration till they leave for good. 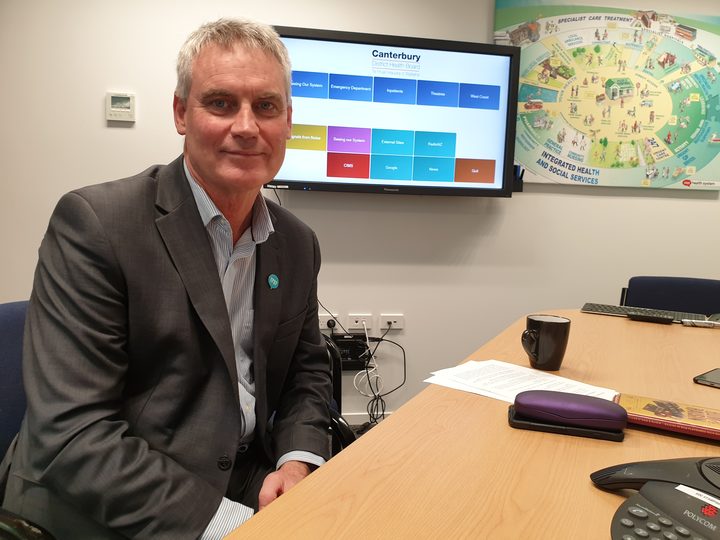 Not David Meates, the chief executive.

He is being farewelled by staff this week, and in a final message to them laid the blame for the DHB's $180m deficit squarely on the government.

"If Hagley, the Acute Services Building, had been delivered on time in 2018, we would be in a break-even position now," he wrote.

The delays in the Hagley project, which was run by the Health Ministry, had cost the DHB $60m-plus a year, for the likes of buying surgery in private hospitals, Meates said.

Health Ministry funding on a population basis for Canterbury had dropped, and the ministry's cash funding as the DHB rebuilt after the 2011 earthquake worked out to a net $23m once DHB paybacks were factored in, he said.

Stuff has reported that the government-appointed Crown monitor, or supervisor, at the DHB, Dr Lester Levy claimed more than half of the DHB deficit was due to operational inefficiencies.

This enraged some staff.

RNZ understands the Director-General of Health Dr Ashley Bloomfield said in meetings with DHB staff, when he was sent to Christchurch by the Health Minister on damage control last week, that he will not let Dr Levy talk to media again.

Dr Bloomfield refused to comment, his spokesperson saying it was a private conversation.

The former head of the senior doctors' union, Ian Powell, said the Hagley delays and government knockback to the hospital's $450m rebuild plan just a few months ago "make a mockery" of claims that operational inefficiencies have played a key part in the deficit.