Auckland residents have been queuing up again in droves around testing centres today on day two of the level 3 lockdown. 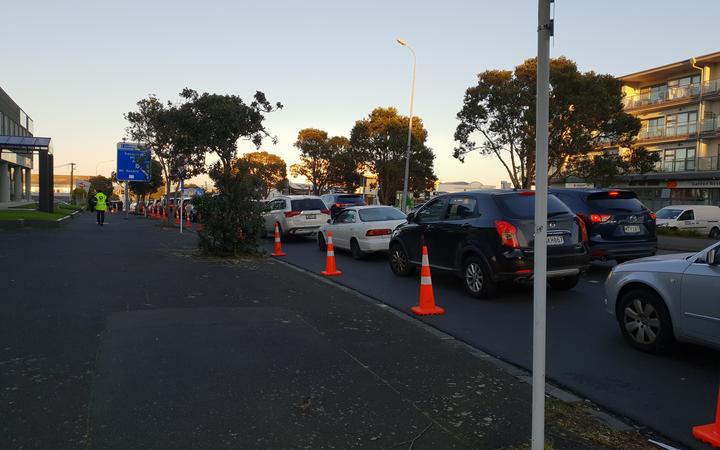 Traffic snaked for hundreds of metres outside some centres, where people who were turned away yesterday returned for another long wait.

Almost 20,000 cars have been stopped by police at the city's borders - including people trying to get to their bach.

One woman had been waiting outside the Eden Terrace community testing centre central Auckland this morning for more than an hour before it opened at 8am, and she was not the first in the queue.

"I came yesterday and waited for three hours and then came later and waited for six hours and gave up, so I came early this morning and have parked somewhere else so I don't get caught in the traffic," the woman, who didn't want to be named, said.

She has been having a running nose, cough and fever since the beginning of the week.

"Because I have symptoms and I'm a nurse ... I just need to be checked out so I can go back to work," she said.

Francis Collier said he arrived at 1pm yesterday but did not get tested so he came early today. He has been having flu-like symptoms and did not want to be in doubt, but he was less worried about himself.

"Not my own health but I'm just concerned for its spreading. This is the best way to get on top of it - everyone gets tested and find out where it is."

At one centre in St Lukes, lines of cars stretched for hundreds of metres. Meghan Anderson said she arrived half an hour before the door opened.

"There was a lot of people in line already, maybe like a few dozen cars already ... so it has been a long wait."

Anderson was not worried about herself but wanted to make sure she did not spread it to her flatmates and the community if it was Covid.

"I've had a fever for the last few days and a sore throat which I assumed it was just a regular cold but then hearing this case came out. I don't think it is but, you know - who knows?"

Retiree Jim Blackett from Whangaparāoa was in line in Warkworth this morning, having shown up for a test at the Northcote centre at 10.30am yesterday and being told after three hours it was unlikely he would be seen that day.

"It was going to take me still another four and a half hours to get through, by which time the clinic would be closed. So I took their advice and came home."

More than 3500 people were swabbed at community testing centres in Auckland yesterday and well over 10,000 across the country.

Meanwhile, at the city's northern outskirts, police and defence force staff were manning a checkpoint and interviewing those trying to travel in or out of Auckland.

By 7am across all nine checkpoints, 17,000 vehicles had been stopped and 312 had been turned back, including some people trying to travel to holiday homes.

At the State Highway 1 border north of Wellsford - 80km from the central city - one carload had a laminated work letter from their boss. A defence force staff member asked their reason for travel, examined the letter, and asked for identification from all three occupants to match them with the letter, before letting them through.

Wait times topped out at about five minutes between 7am and 8am.

A number of signs heading north on the motorway reminded people that leaving the region was strictly for essential travel.

One man who was turned away struggled to prove the job he was going to was permitted.

"So they thought roofing wasn't classed as essential ... I've just got to wait for a letter from the boss. I'm fine because I'm going fishing, so I'm happy," he said.