National Party leader Judith Collins has called on the Prime Minister to delay the election, saying it is not possible to have a free and fair vote in the circumstances.

She say she will be sending a letter to the prime minister requesting that the election be delayed until late November, or preferably until next year.

Her statement comes after four new cases of Covid-19 in the community were identified last night, with Prime Minister Jacinda Ardern and Director-General of Health Ashley Bloomfield announcing increased Covid-19 alert levels across the country.

She expressed her disappointment that Auckland had returned to alert level 3 and the rest of New Zealand was in level 2.

Collins asked for a meeting today with the Electoral Commission, saying it would not be possible to have a free and fair election.

"We are calling on the prime minister ... to shift out the election date to a date later in November."

She says if that is impossible, the prime minister can instead defer the election to next year.

"We think that is probably the better alternative." 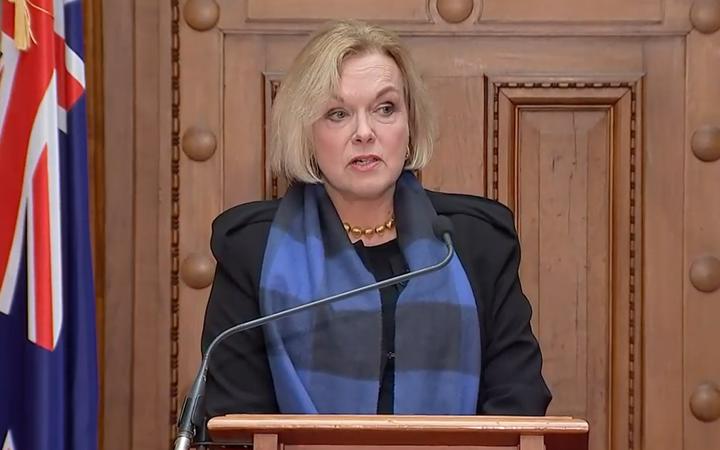 National leader Judith Collins calls for the election to be delayed Photo: RNZ

Collins rejected the suggestion that delaying the election, risking potential further delays due to Covid-19, would also be undemocratic.

"It's very hard to have any democratic vote if people can't vote, that is the problem."

Collins says it is unacceptable for New Zealanders to be left wondering if they can vote on election day. She said relying solely on a postal vote was "utterly ridiculous for anyone who cares about democracy".

"We are a first-world liberal democracy where people expect to be able to cast their vote and if we can't think of ways to do it properly then we need to delay the election ... if it's just a postal vote, then no - that's not good enough."

She says it is unacceptable that Dr Reti, the party's health spokesperson and a former GP - is still waiting for an update from health officials. He has been trying to talk to them all day, she says.

She confirmed the party was cancelling its campaign launch, which had been planned for Auckland.

The four cases of community transmission were members of the same family, and Ardern revealed this morning that one of them had travelled to Rotorua while symptomatic.

The Auckland region moved to level 3 at midday today, with the rest of New Zealand moving to level 2 simultaneously. The increased levels will remain for three days until midnight Friday, when alert levels will be reassessed.

Collins this morning had urged Ardern to delay the dissolution of Parliament, which she has since done.

National deputy leader Gerry Brownlee said he was left wondering what health officials knew but were not explaining, after the decision for Auckland to re-enter level 3 after the discovery of four positive cases.

"I believe that New Zealanders need to know what the government knew. If they didn't know anything else than what was advised last evening, then we should know that," Collins says.

"We don't have that transparency. That's one of the reasons that we want the briefing on the health issues to Dr Shane Reti. We do need to know, as the public needs to know."

She says the National Party should have been consulted on the alert level decision, not just advised.

Brownlee says any health message should be delivered by health officials and not the prime minister, considering it was so close to the election.

"I think you have to be very careful on how you use the airways in an environment where you have only a few weeks away from an election being cast."