The mobile emergency alert had to be re-sent this morning because some Vodafone customers missed out on the message. 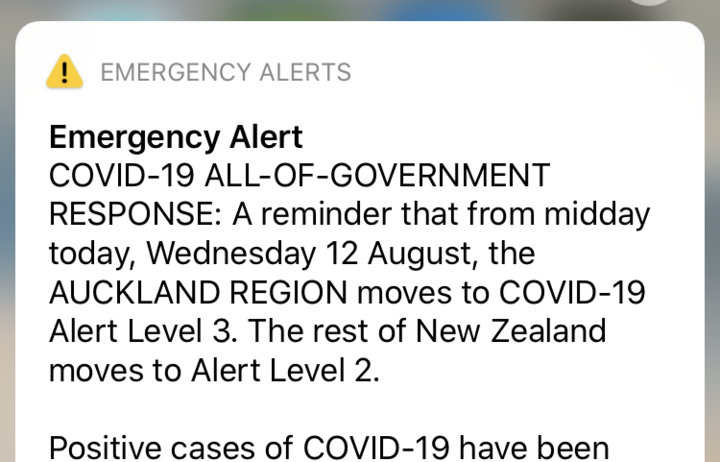 Some Vodafone customers missed out on the Emergency Alert that was sent last night. Photo: Screenshot

At 10.15pm last night the National Emergency Management Agency sent out a mobile alert advising the country of the Covid-19 level changes.

But due to a planned upgrade some Vodafone customers did not get the message.

We've heard from a number of people they received last night's Civil Defence emergency alert message late - or not at all. This was due to an unrelated technology upgrade and the message was resent successfully at 6:55am. Apologies for any confusion #covid19nz #staysafe

Prime Minister Jacinda Ardern last night announced that Auckland would move to alert level 3 from midday today until midnight on Friday. She said that four members of an Auckland-based family had tested positive for Covid-19 outside of managed isolation or quarantine.

In a statement Vodafone confirmed "that due to an unrelated technology upgrade occurring at the same time, which was planned before the alert level 3 announcement, some customers did not receive the message".

Via Twitter, many Vodafone customers last night said they had not received the alert.

Yep, got it on my personal mobile (spark) but not my work mobile (vodafone) ‍♀️

Vodafone tweeted that it was late when it was determined that a number of people had not received the message and so it was decided that 6.55am would be a more appropriate time to resend it.

Hi There, an unrelated technology upgrade was already in play when the L3 announcement was made, meaning some Vodafone customers either got the 10:15pm message late or not at all. When it was determined that a number of people didn’t receive a delayed message, it was late 1/2

The National Emergency Management Agency says it was re-sent this morning to ensure all New Zealanders with a capable smartphone received the alert.

In a tweet, Vodafone said its tech teams are working with Civil Defence to ensure that such delays do not happen in the future.