Details of new Auckland transport projects have been released today, including plans for a $37 million shared path alongside the Whau River connecting New Lynn and Te Atatū. 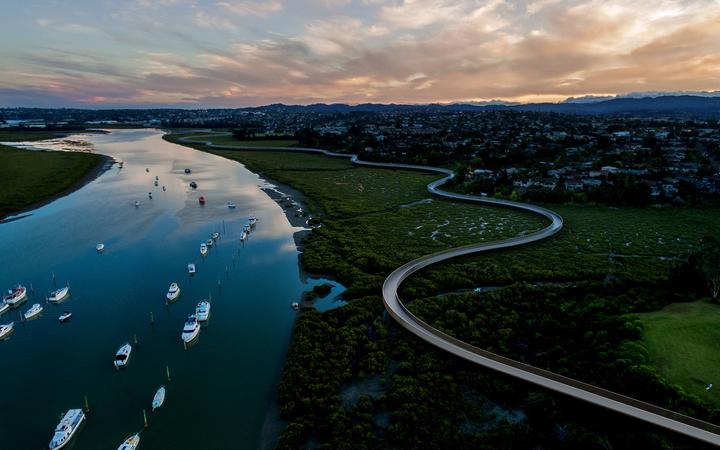 The investment would also protect about 200 jobs on two projects that were already underway, while also freeing up $98 million in Auckland Council's Emergency Budget to be re-invested in other infrastructure projects.

Twyford said it was a a balanced transport package that reflected the need to invest in 'shovel ready' projects and create a pipeline of work.

"By investing in the under construction Puhinui Interchange and Stage One of the Ferry Basin Redevelopment project, we are protecting jobs and making sure these important projects can continue. Both are expected to be completed next year," he said.

"Two West Auckland projects have the green light; $100 million worth of improvements to the North Western Motorway to allow faster and more frequent bus services, and a new $37 million shared path alongside the Whau River connecting New Lynn and Te Atatū. The Northwestern Bus Improvements could mean up to 35 minutes saved on a bus trip from Westgate into the city."

He said the two West Auckland projects still needed detailed design and consenting work, but construction was expected to begin next year.

"The Te Whau Pathway will be extended through New Lynn, from Olympic Park to Ken Maunder Park, and through Te Atatū South, from Laurieston Park to the North Western Cycleway. This will give these communities an easy and safe way to get around.

"By investing in public transport and walking and cycling infrastructure, not only are we helping people leave the car at home, we are reducing emissions and tackling climate change," she said.

Auckland Transport was also planning to upgrade Puhinui Station to become a major bus and train interchange. Alongside the underway upgrade of State Highway 20B, it would create a 10-minute bus service to the airport.

The Ferry Basin Redevelopment would create six new berths on the west side of Queens Wharf, with improved accessibility and accommodation for increased passenger numbers.

But Robertson said today that confirmation that National had not costed the Brynderwyn and Kaimai tunnels raised "serious questions about National's competence".

"They were literally the 'first' projects Judith Collins talked about in her press release about a transport plan that she said was 'worth $31 billion across New Zealand'.

"National has now confirmed that they have no idea how much these projects might cost. It's hard to believe that this sort of omission would have been allowed under John Key or Bill English."