The government has renewed its call for New Zealanders to use the NZ Covid Tracer app, even indicating it may force businesses to display the QR code for customers to scan. 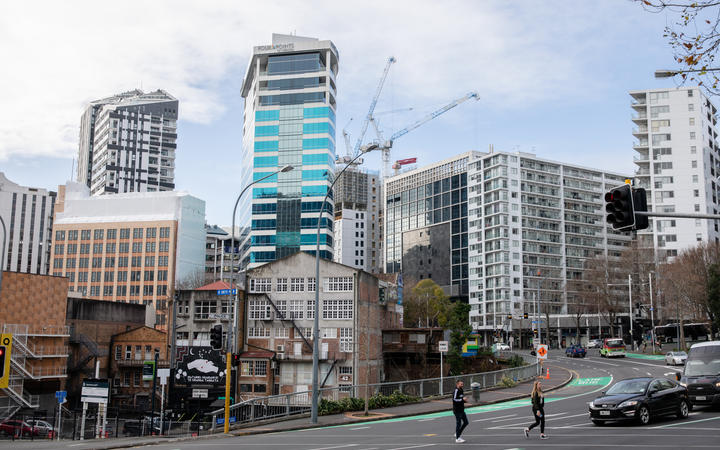 The number of people who have downloaded the app appears to have stalled, with 596,000 having installed it on their phones as of yesterday, just 5000 more downloads than the same time last week.

RNZ spoke to people in central Auckland about whether they are using the app, and almost all were a bit blasé about it.

"I'm aware of it but I haven't downloaded it," said one man. "I just don't see the need to at the moment."

After initially being meticulous about using the app, one woman said her contact tracing standards had slipped in recent weeks.

"I know there's no community transmission so I probably don't do it as much as I should."

The newly minted leader of the opposition, Judith Collins, was similarly unimpressed.

"I tried to use it about two weeks ago and then I thought, come on, I couldn't even make it work," she told reporters.

Kay Park has been dutifully displaying the app's QR code in the window of her High Street cafe, Stolen Summer, but at the moment it was a little more than window dressing.

She said of the 200 or so customers she served yesterday, only about two scanned their phones against the code.

Kerran Cobb, who works down at the gift shop Pauanesia, found it a bit odd that the government was making a fresh push for people to use the app so long after the lockdown.

"From my perspective, not many people were using it anyway - I never really saw anyone do it," she said.

Anastasia Andreeva works at Lush on Queen St, which also is not displaying the code anymore.

She questioned the merits of making it mandatory for shops but not customers.

"What's the point of displaying the code if no-one will follow it up? From my personal experience, when I do see the codes on the wall, I'm not scanning it anymore," she said.

"We do feel quite safe - the government's said that it is safe. Why would we scan it, right?"

The director of AUT's centre for social data analytics, Dr Rhema Vaithianathan, said the government rolled the app out before it was ready, and as a result it had "fallen flat on its face".

She did not think making it mandatory for businesses to display the QR code would help.

"I think when the government makes things mandatory they need to have evidence that it's effective and safe. I don't think the government can use its power of mandating without jolly good evidence that the app works and as far as I can see, I haven't seen that evidence."

Vaithianathan said there needed to be an open discussion between the government and the public about how to best use contact tracing technology, and what on the vast menu of possible options people would be willing to accept.

Otago University epidemiologist Michael Baker is urging the government to scrap its contact tracing app in favour for bluetooth technology.

Michael Baker told Morning Report issuing people a separate bluetooth-enabled device would work better than an app on a phone.

"If you look at the experience in Australia with its outbreak, I think it's very sobering for New Zealand. The app wouldn't have helped and it hasn't helped over there, whereas if everyone was carrying one of these devices or cards that's bluetooth enabled, that really would keep a record of your contacts.

"It can be configured in a way that doesn't compromise privacy at all."