The Marlborough District Council is concerned the New Zealand Transport Agency is downplaying the impact larger ferries will have on Picton's roads, prompting a request for the agency's traffic predictions. 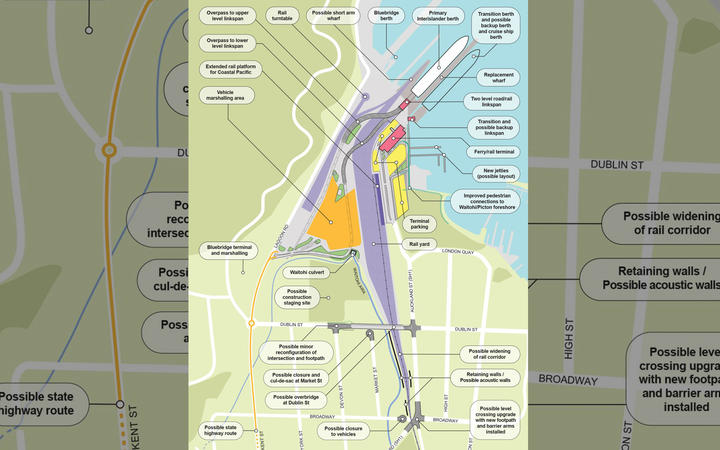 There are several proposed changes for Picton's roads as part of the ferry terminal upgrade. Photo: Supplied

Bosses from the Marlborough District Council and Port Marlborough have signed a letter asking Waka Kotahi (NZTA) for traffic data after it said plans for two new Interislander ferries would not greatly impact the region's roads.

Council chief executive Mark Wheeler, one of three to sign the letter, said the council and port had "some concerns" with the reassurance, and wanted to check traffic predictions through their own systems, so any problem areas were taken care of.

"They [NZTA] are saying the impact will not be of great consequence, but we want to be sure of that ourselves, because we want to go back to the public to reassure them."

NZTA had been "receptive" to the letter, and was expected to provide the council with its traffic models for different Picton intersections in the coming days, Wheeler said.

Stuff could not obtain a copy of the letter as it contained commercially sensitive information.

Last year, KiwiRail, NZTA, Port Marlborough, and the council began a four-year plan to upgrade Picton's ferry terminal, but the project was one of 11 approved for fast-tracking in June.

The new terminal would accommodate the two new ferries, set to be on the water by 2024, which could carry trains across Cook Strait. The idea was to save rail cargo from being unloaded and reloaded between islands.

NZTA had hired an independent consultant to look at what impact the new larger ferries would have on traffic, given there would be fewer ships but more passengers leaving at once.

A spokeswoman said traffic models would be part of the discussion, feeding into the wider terminal business case.

The business case had not been finalised, she said. Public open days were planned for later this year.

Wheeler said the intersections most likely affected were those along Kent St, proposed as the new State Highway 1, especially at its Dublin St and Wairau Rd intersections.

Both the intersections struggled to cope with a full load of passengers leaving the current smaller Interislander ferries.

Wheeler said it was likely plans to build a bridge over the rail line at Dublin St would go ahead.

Committee chair Francis Maher said at a council meeting on Thursday it was about "keeping the finger on the button".

"That communication - and you can see it's a pretty heavy group of signatories - is about making sure that when the ferries and their effects do hit Marlborough, that we're not disadvantaged in terms of our roading network," Maher said.

As part of the fact checking, Wheeler said the council intended to re-run a study into traffic along SH1 in Blenheim, "to show the public new ferries [would] not make any difference to a bypass".

The study, commissioned by the council, showed about 680 vehicles a day drove through Blenheim without stopping - not enough for a bypass, but enough for a new roundabout.

"A bypass costs hundreds of millions of dollars, and the numbers to justify it are not going to come from the ferries."

Cardno senior transport engineer Laura Skilton, who authored the report, told councillors that a bypass "does not stack up financially" and was not included in her long-term solutions.

But she did suggest double lanes along SH1/Grove Rd, blocking off the Park Terrance arm of the Main St and Redwood St roundabout, or creating alternative routes around Blenheim.

Short term, she suggested a new roundabout at the Budge St and Grove Rd intersection, adding an extra northbound lane at the Alfred St intersection, or removing some short-term parking.

Councillor Jamie Arbuckle said the public wanted a short, scenic bypass - which he supported - not a long one.

Leggett said the council could not rule out a shorter bypass down the line.

"Some of these shorter opportunities I absolutely agree that in the fullness of time we're going to have to look at. It's forward thinking. We need to have that as a possibility," Leggett said.

Several councillors agreed a long bypass, suggested to connect Koromiko and Riverlands, was "completely off the table".