The Department of Conservation has leapt to the defence of a fisher who accidentally caught a great white shark off the coast of Taranaki at the weekend. 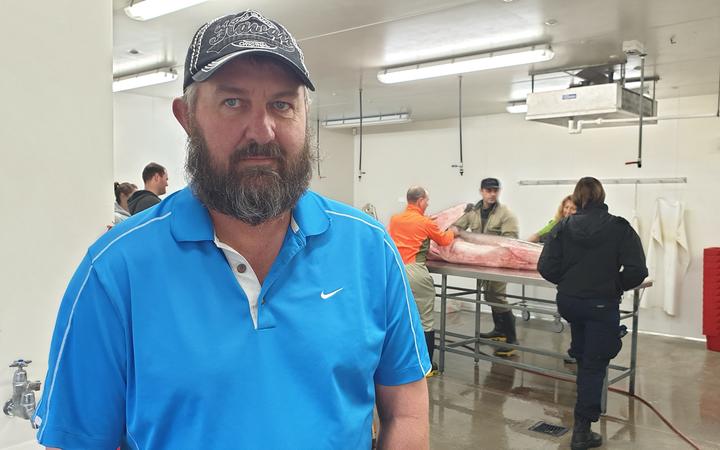 Rob Ansley of Ocean Pearl Fisheries has faced a barrage of criticism for causing the death of the protected species, but DOC says he did the right thing by reporting it.

Ansley and his crew caught the great white about 12km off Port Taranaki on Saturday, while targeting blue warehou using set nets.

A fisheries observer was aboard and the Ministry of Primary Industries was contacted immediately.

Ansley said his heart sank when he spotted the dead shark in his net. 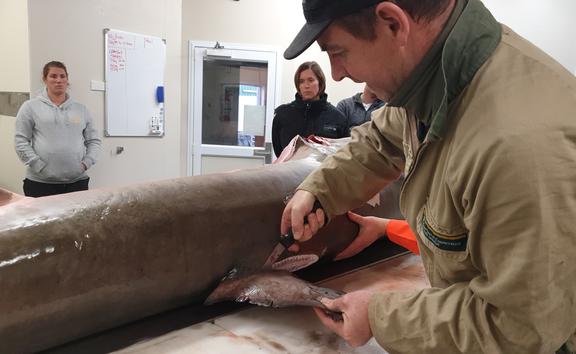 The great white shark that was caught off Taranaki was then dissected for scientific research purposes. Photo: RNZ / Robin Martin

"I thought 'oh bugger'. It's not a good thing to catch. The last thing I really want to catch. You don't make any money out of white pointers. I'd rather see them out swimming in the ocean eating seals."

Ansley was asked to land the shark so it could be dissected for scientific research purposes.

DOC marine scientist Clinton Duffy examined the great white in New Plymouth today, after it had been blessed by members of the Ngāti Te Whiti hapū.

"This is a pretty typical juvenile male great white shark. It's about 2.8 metres long which is very common sized animal for this part of New Zealand. So, off the northwest of the North Island we see quite a lot of great white sharks this sort of size. They are quite common in the large harbours further north like the Kaipara and Manukau." 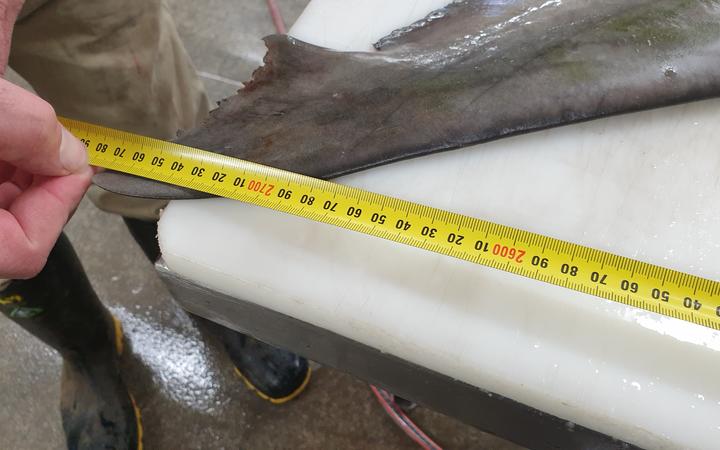 The 260kg great white shark caught off Taranaki was a mere pup measuring in at 2.8m, compared to the 6m shark known as Taranaki Terror. Photo: RNZ / Robin

Duffy said the fish had yet to reach its full hunting potential.

"This one had no scarring around its snout and eyes that you'd associate with feeding on marine mammals like seals so it's probably spending most of its life up until this point feeding on fish.

"They like to feed on things like snapper, trevally, mullet and other sharks. So, they eat rig, spotted dog fish, school sharks, small seven-gills and things like that."

Ansley copped criticism online for the shark's death with some people calling for him to be prosecuted, but DOC senior Taranaki ranger Callum Lilley said although great whites had been protected since 2007, it was not illegal to catch them accidentally and Ansley did everything by the book. 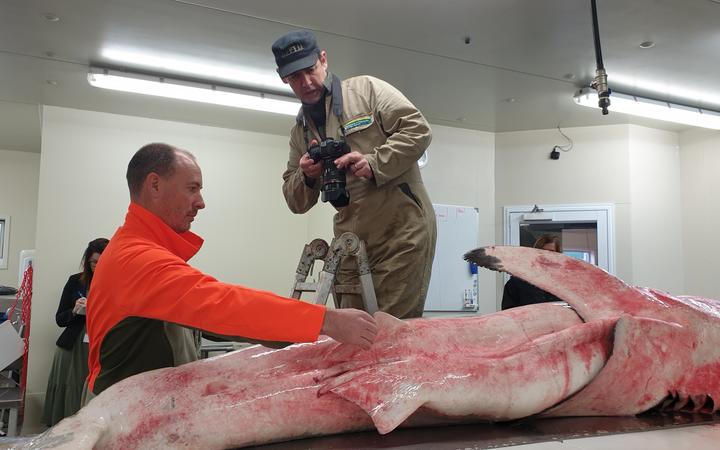 Callum Lilley, left, and Clinton Duffy examine the great white shark that was caught near Taranaki after it was blessed by members of Ngāti Te Whiti hapū. Photo: RNZ / Robin Martin

Lilley said sharks did not float so bycatch was often the only way scientists could get a hold of them for research purposes.

"I think we have to acknowledge that things like this do happen from time to time and we want to encourage fishers to report them and provide these opportunities to science. I think people need to just be a bit kinder on social media."

Duffy said this 260kg great white was a mere pup compared to the Taranaki Terror - a 6m specimen also known as Mrs White - which made headlines in 2006.

"The best reliable estimates for maximum size for females is up around 7m and males have recently been recorded up 6m long, so even though this is a big shark it's actually quite a small great white shark."

Ansley, who had had his own encounters with Mrs White, was grateful he had not not got her snagged in his net.

"The big one, the Taranaki Terror, I've seen it a few times. It's like a submarine and a fairly large fish.

He admitted the giant shark unsettled him a bit.

"Enough to stay out of the water. I used to dive out in the Taranaki waters here, but not after seeing that."

It is estimated there are 750 adult and a total of 12,000 great whites cruising the Tasman Sea.

According to DOC, 15 have been caught as bycatch over the past year.

After being examined today, the shark's jaw and teeth were to be made available to Ngāti Te Whiti for cultural purposes.