Non-disclosure of a pilot's medical condition was a serious concern for the Transport Accident Investigation Commission which has been investigating a helicopter crash near Wellington. 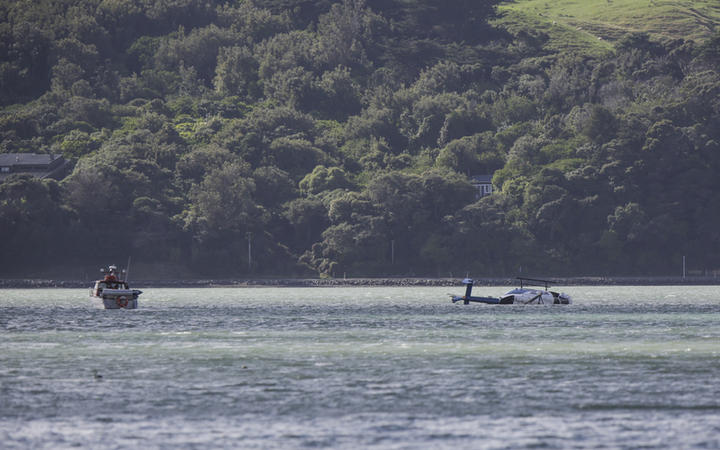 The helicopter crashed into Pauatahanui Inlet near Porirua in May 2017. Photo: RNZ / Rebekah Parsons-King

The commission has released its final report into the ditching of a helicopter in May 2017, while it was transporting 11-metre power poles at Porirua Harbour.

The pilot escaped from the partially submerged helicopter with minor injuries, but the aircraft was "substantially damaged".

The report showed that while the pilot's medical condition was not a factor in the accident, neither the condition nor medication for it had been disclosed to the Civil Aviation Authority.

The commission's investigation found there were no mechanical issues with the helicopter that might have contributed to the accident, but it did find several "significant anomalies" in the helicopter's maintenance records, which had been left unresolved at the time the CAA issued it with a certificate of airworthiness.

The finding has prompted Taic to recommend that the Civil Aviation Authority amend its policies and procedures for issuing certificates of airworthiness for imported second-hand aircraft, to ensure that the "appropriate audit and assurance processes are in place and the procedures are consistently applied".

During the inquiry Taic discovered that other aircraft owned and operated by the same company that imported the helicopter into New Zealand also had significant anomalies in their maintenance records.

The CAA immediately issued a Continuing Airworthiness Notice to address the safety issue, but it was subsequently withdrawn after no reports were received.

The commission said it also identified that CAA's process for entering second-hand imported aircraft into the New Zealand regulatory system was not clearly defined; was not clearly understood by some staff; and did not have the checks in place to ensure it was followed.

The CAA subsequently arranged an independent review of the process for issuing a certificate of airworthiness, including the "conformity inspection" process for second-hand aircraft.

However, the commission believed further action was needed, and as a result of the inquiry into the helicopter ditching incident, made the recommendation.

The CAA said it would accept the final recommendation as part of a programme that would see a more "holistic/capability approach" for an aircraft-type acceptance process.