If you're planning to travel to Europe for a holiday, be prepared to pay for the full cost of isolation when you return, the Prime Minister says.

New Zealanders can travel to EU countries from tomorrow, when the bloc's external borders are reopened.

The European borders are now open but it's not as simple as just hopping on a plane.

The Ministry of Foreign Affairs is still advising against all international travel despite the EU's decision.

Flights to Europe are still restricted through both price and availability of routes, and anyone coming back New Zealand would still have to do 14 days of isolation and have two mandatory tests.

Cabinet ministers are already discussing the possibility of asking people to help cover the cost of isolation at the border, with Prime Minister Jacinda Ardern flagging a tougher approach for those who leave by choice.

"I'd say if you're making the choice, at your expense, to travel overseas, then you should meet the full cost of that holiday."

Ardern said they were looking at getting people who were making "deliberate decisions to leave without good reason... picking up the cost of that on their return".

The government would be moving "fairly quickly on that", she said, especially with other borders around the world reopening.

While the EU had opened its border, Ardern said that would not be reciprocated in New Zealand.

"It does not mean, obviously, that we'll have borders opening for anyone in return, what it does mean is New Zealanders will have the ability to enter without isolation requirements."

National's leader Todd Muller said it was worth asking the question - should all New Zealanders who've travelled to Europe even have to quarantine when they come back, if they can prove they are Covid free?

"If you have the capacity, which I think will occur over the next few weeks and months, to be able to demonstrate in an equivalent system and testing, that you actually are Covid free when you come back, it raises the question to me as to whether then you still need 14 days and two tests."

Muller repeated his view it was "untenable" for New Zealand to stay locked down indefinitely, but acknowledged it would be too risky to relax any border restrictions at the moment.

He called on the government to release much more detail around what would have to happen before New Zealand opens its border. 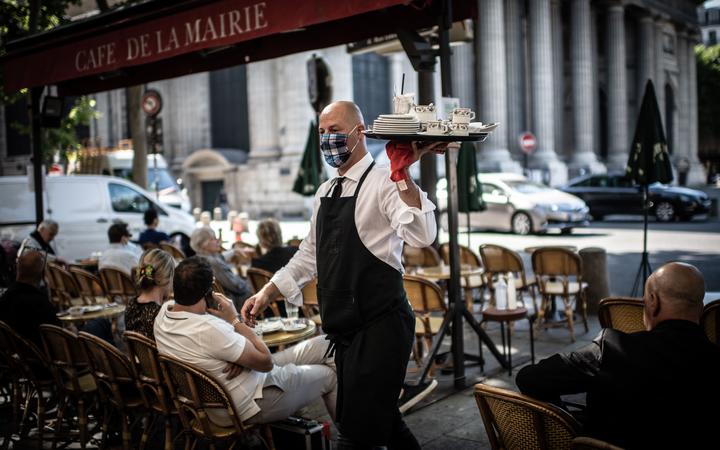 A masked waiter works at the terrace of the Cafe de la Mairie on the Place Saint-Sulpice in Paris. Photo: AFP

Ardern said there was a time in the future when borders would open, but to do so now would be "dangerous".

"The reason New Zealanders have the freedom we have and that we've been able to domestically open up our economy, has been because we've kept our borders so tight,'' she said.

The focus was opening up the border with the Pacific and Australia, but only when it was safe to do so, Ardern said.

The facilities will be in Auckland, Christchurch and Hamilton and will provide a further 900 beds.

Ardern said this would provide about 1150 spare beds across the country to match the rise in the number of people returning, and allow for a buffer.

She said information about how many people were on flights was still being provided very last minute.

"We do still have a level of uncertainty from airlines around passenger manifests until doors close and wheels are up.''