A school principal says his students, locked out of the country by border closures, are trying their best to keep up with their schoolwork - despite living in a shed in South Africa. 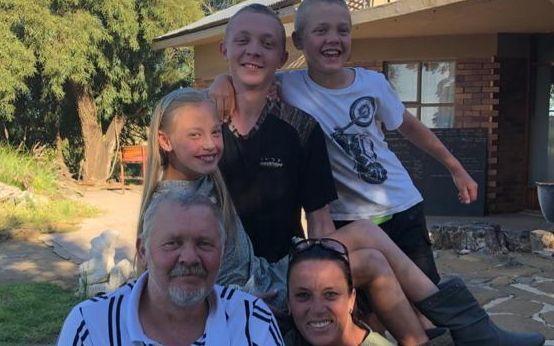 Carla Badenhorst and her family who are stuck in South Africa. Photo: Supplied

About 10,000 people who would normally live in New Zealand on work visas are stuck overseas.

Carla Badenhorst, her dairy farm manager husband and three children live near Oamaru, but were on a visit to South Africa to see family and renew their passports.

They got stranded when they could not get a flight back before lockdown.

"We're stuck about two-and-a-half hours outside of Johannesburg living in a shed on my brother-in-law's farm," she said. "It's winter now, we're not really geared for the winter as the shed has got no ceiling and no real heating in it either. Having no income is really hard at the moment as well."

It was hard on the children who were trying to do their school work online, but were hampered by the poor internet connection and the time difference, she said.

The school system in South Africa is very different to New Zealand, she said, where they have lived since 2016.

Her youngest children, Carlo and Marieke Badenhorst, go to the 54-student Maheno School and Adriaan goes to St Kevin's in Oamaru.

Maheno School principal Ryan Fraser said it was having a big effect on the family and the small school community, which wanted them back.

"We're like a whānau here and we include everybody in what we're doing - like all schools in New Zealand, but being a small school you're really connected with the kids, and with each other," he said.

"Their classmates are obviously missing them quite a bit, and there's a lot of talk about what's happening and then we have discussions in class and I don't have the answers, which is really hard for the kids."

Staff are sending them work to do but it was not easy for teachers or the family, he said.

"They're in rural South Africa, so I'm not sure the connection's that good over there. It's been pretty tough actually to get in contact with them.

"It's hard for us as teachers to see what they're up to and be in contact with them because of the connectivity."

Carlo is in Year 8 and is scared he will have fallen too far behind when he starts college next year, Badenhorst said.

He has type 1 diabetes and a pharmacy has had to import expensive supplies for him to use with his New Zealand pump.

Her other children, Marieke and Adriaan, were struggling too, she said.

"Missing home, for my 11 year old I think is the worst - my daughter cries every night, basically asking about her cats. My eldest son has been sitting during school during New Zealand's lockdown from 12am to 4am, because of the time difference.

"He is losing a lot, he is trying his hardest to stay up-to-date. I must say the schools are really helping and trying to get the info to him but it's not the same for him as sitting in a class, and actually having the teachers there to explain it.

"The kids are doing about seven hours of school a day. Adriaan does about 11 hours currently because he's doing some extra tasks that the teachers have sent through."

The family has applied for an exemption to travel four times - twice because of how much they are needed back on the farm, and twice on humanitarian grounds - but all were rejected.

They were lucky to have the support of the farm owner where she and her husband work, she said, but calving season was fast approaching and that would put him and the business under a lot of stress.

A Cabinet paper last week shows the immigration and primary industry ministers are considering how best to manage border exceptions for rural workers.

The immigration minister last week told RNZ that families with school children may be prioritised when the government decides if it will loosen border restrictions.