Mount Hutt skifield in mid-Canterbury managed to draw a record crowd of close to 2000 people for its first day of the season today.

The end of alert level 2 restrictions from Tuesday meant the field was able to host twice as many skiers as it would have been able to if the Covid-19 rules were still in place.

There was already a sizeable crowd patiently waiting in line for 9am and for the chairlift to take its first load of devotees to the top of the mountain.

Few had the dedication of Ben Yorston, who arrived yesterday, fully prepared to spend the night camped out by the lift to ensure he was the first up the top for the start of the season.

This was the eighth year Ben had been first in line. 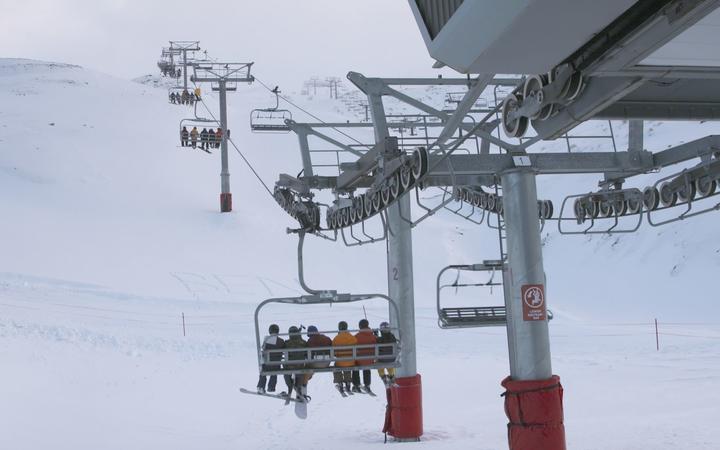 "My plan is to go to 10 [years]. My girlfriend doesn't really want me to, but this is what I love.

"The problem is I needed a bit of a toilet stop since like five this morning and I'm a bit nervous if I leave my spot I might lose it, so I'm holding on."

A lot of people were keen to make the most of the new freedom offered by being in level 1.

Bazz Kerr, who travelled all the way from Whangamatā in the Coromandel for today, normally skis in the northern hemisphere.

With the borders still closed he was hitting the slopes in New Zealand for the first time in 10 years.

A few skiers looked a bit rusty on their first day of the season, but with half a metre of snow at Mount Hutt already, they were assured of a soft landing.

It wasn't all plain sailing for the skifield on opening day either, with a technical fault on the main lift resulting in a cold wait for those already on board when it happened.

The breakdown left RNZ stuck at the top of the mountain as well, until a snowmobile came to the rescue.

Paul Anderson, the head of NZ Ski - which owns Mount Hutt, Coronet Peak and the Remarkables skifields in Queenstown - said with the borders closed they were completely reliant on New Zealanders to fill their chairlifts this season.

"It's been a real mixture of emotions today getting open because we've been on this roller coaster through the planning phases of Covid, doing what we needed to do to get opened under level two, and then absolutely stoked to get the clearance to open under level one."

He was pleased with today's turnout of close to two-thousand, a record number for a Friday.

"And we're also seeing good strong multi day sales into the North Island market, so we're expecting to see a lot of Auckland people and Wellington people and Tauranga people coming down and staying in Methven and Queenstown."

Ben Yorston didn't manage to win the race to the bottom this year but was nevertheless happy to be doing what he loved to do best.

"I sit idle all summer just waiting for something to do... I go wherever I want to go. I don't know how many hectares of playground I've got, but I've got a lot, just to be free."