The government announced in March $100 million would be spent to help redeploy workers affected by Covid-19.

In the latest Budget, $100 million was targeted to wilding pine control, with up to 600 jobs expected nationwide.

Biosecurity Minister Damien O'Connor today visited a wilding pine site in Skippers Canyon near Queenstown, where some tourism workers have already been redeployed.

Alpine Luxury Tours owner and head guide Lee Saunders has been in the tourism industry for the past seven years, and said he had been forced to make his guides redundant, and put his business into hibernation.

"We just haven't seen it this bad, especially when the tap gets switched off, pretty much income stops flowing. We've had the wage subsidy and things like that, but you get used to one thing and you just want to keep going and building business. You just got to keep income coming so I sort of had to turn to this and help out," Saunders said.

Now he fells wilding pines and supervises crews on the hillsides around Queenstown.

"Obviously it's helping the environment, helping the native plants and everything flourish once we get all these pines out but it's an ongoing process, it's going to take a long time to do it.

"But slowly working away at it, cutting out the little green tree on the hill, you sort of feel quite good." 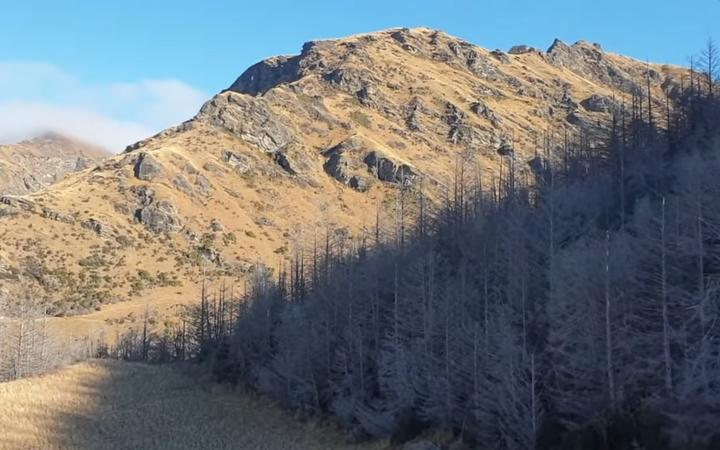 Wilding infestations in Skippers Canyon date back to the gold rush in the 1860s, when miners planted the trees for shelter around the historic school house.

Over the last 15 years, dense infestations have been removed with a lot of collaboration between government, councils, the Department of Conservation (DOC), and local control groups.

The rich green of wilding pines in gullies and along the hillsides signals there is much work still to do in the rugged, mountainous landscape covered in tussock, but vast swaths of skeletal dead trees show where progress is also being made.

Central Wilding Tree Control owner - manager Amon Saunders said it had been tough attracting New Zealanders, but he was hopeful that would improve.

"Some of the Kiwis I have taken on they basically just want to work, they've got families to feed so they just want to be out, and they're loving it," he said.

"They didn't realise how much a problem it was until we get out into the backcountry."

His usual crew of eight to 10 had already risen to 22, and Saunders said he would probably go up to 30 with redeployed Queenstown workers making up two-thirds.

The work covers about 9000 hectares from lake level to 6500ft and means using chainsaws, pulling out seedlings, aerial spraying and using herbicides.

Saunders' foreman George Hyde said it was a good opportunity to get outside and help tackle a big pest problem.

"Every day's a different day. There is a lot of hiking involved, going up the mountains, tree felling.

Sherman Smith manages the wilding conifer programme for Biosecurity NZ and said the Wakatipu area was a hot spot for the invasive species.

"Those areas that are heavily impacted by wilding conifers are these really unique New Zealand landscapes and those are the areas that have lost tourism jobs through the impacts of Covid-19 so there's really nice alignment here," Smith said.

"We can take on workers, get them out there protecting these areas that they're involved in. Often these people from tourism have a passion for the outdoors anyway, particularly in places like Queenstown that's an adventure tourism hub.

"Hopefully it can carry them through a bit of a rough patch coming out of Covid-19 until tourism recovers."

"Obviously tourism is going to be quiet for quite a while so seeing those workers finding really good, meaningful employment elsewhere is a really positive move," Boult said.

The lockdown meant the Wilding Conifer Control Programme could redirect some funds to begin work immediately with $100,000 to support additional ground control and helicopter work.

Biosecurity Minister Damien O'Connor said he expected the Queenstown focus would create hundreds of jobs in the long run with help from the Budget.

"We hope to have hundreds as I say over time, but we've got to ramp it up to the point where we've got safe supervision and that depends on the capability on the ground," O'Connor said.

"We want to ramp this up over the next few months, the money really comes on stream in July, but we've found money to get additional workers and then working with QLDC and working with the Trust here we'll try and have as many job opportunities as we can.

"But the reality is some of the money has to be spent on helicopters because of the country."

The government was not due to announce where the additional jobs would go until next month.

Queenstown was in a good position to pick up funding, O'Connor said.

Work on Queenstown's wilding pines is expected to ramp up next week with more workers and helicopters tackling the pest.