A strong earthquake has shaken much of the country. 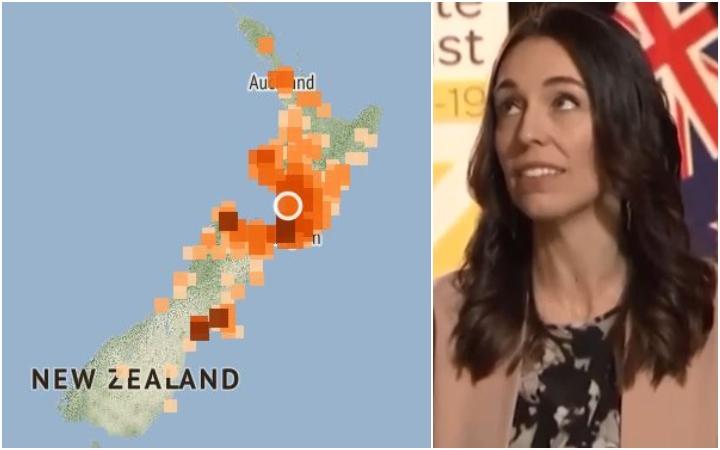 Prime Minister Jacinda Ardern was being interviewed on Newshub's AM Show when the quake hit. Photo: GeoNet/Newshub

The 5.8 quake was centred 30km north-west of Levin, GeoNet said, and was 37km deep. GeoNet had initially assessed the quake as 5.9.

More than 36,000 people, from the Far North to Dunedin, reported feeling the quake, which struck at at 7.53am.

Trains in the Greater Wellington region were suspended while crews inspected the full rail network.

10.30am Update: Train services are resuming from WELL but will run at reduced speed. https://t.co/KftxSdCqJU

I definitely felt that earthquake and it was such a strong shake, also most of my stuff fell of the shelves.#poriruacity #eqnz

Not the alarm clock you want on a Monday morning #eqnz
Biggest one we’ve had in a couple of years. And there goes the FIFTH aftershock as I type https://t.co/ArKyXz72QQ

First time back on train commute, and big ka pai to @metlinkwgtn . Seating all spaced out, easy to understand physical distancing instructions on every seat and in the isles. #covid19nz #wellington pic.twitter.com/hDYqIlwRNG

First #eqnz with baby. Currently taking down all the pictures I had hung in his room. It’s been a while between shakes and although his earthquake kit is up to date, I’d forgotten why you never hang a picture over a baby’s bed!

Eek, on the phone to the Mayor talking about earthquake strengthening the Central Library when that earthquake hit! #eqnz #Wellington

Wellington Civil Defence said there have been no reports of damage.

It said it will be mid-afternoon before it can conclusively say nothing was damaged, but right now things are looking good.

It said the shake is a timely reminder for people to have adequate earthquake supplies.

Horowhenua District Council said there had been no call from Civil Defence to evacuate properties, and staff were out checking for damage.

There had been reports that residents on Waitārere Beach had been leaving their homes.

GeoNet said the earthquake was too small to generate a tsunami.

Prime Minister Jacinda Ardern was being interviewed on Newshub's AM Show when the quake hit.

"We're just having a bit of an earthquake," she said.

"Quite a decent shake here, if you see things moving behind me.

"The Beehive moves a little more than most.

"I'm in a structurally sound place."

Not what we need right now #eqnz

'The whole house was moving round'

Levin local Davey Hughes said it felt like his hilltop home did a complete 360 degree turn.

"I felt the earth move, man and did it shake, I mean I've lived here 30 years and that was the biggest shake I've ever felt in Levin," he said.

"Normally they come down and there's a bit of a rumble and you hear them coming ... that one didn't rumble that one just erupted."

Hughes said he wasn't hurt but just had a few broken vases to clean up around the house.

Matthew Rollinson, owner of New World supermarket in Levin, said some customers were ducking for cover, and a few jars and some fire cleaning product came toppling off the shelves, but nothing serious.

"We're fairly lucky. I mean it was a pretty big shake and it went for quite a long time. I was upstairs at the time so I came down to check on everybody. It was a bit of a wake-up call."

Jazmine Bell in Palmerston North said the quake was incredibly strong, and left plant pots, sculptures, books and paintings scattered in her garden and house.

"I actually couldn't get up, to go get under the doorway or anything. I was sitting at the table having that first cup of tea and could not move. I tried to get up and it was just - the house was shaking so much," she said.

GNS Science duty seismologist John Ristau said quakes in the area were not unusual, but often they're much weaker.

"Earthquakes in this area - offshore Kapiti Coast - are not unusual, we get quite a large number of earthquakes out there every year, including a number of [magnitude] threes and fours which are quite widely felt."

There have been smaller tremors of up to 4.4 magnitude.

We have located at least 45 aftershocks as of 10:52AM, this M4.4 is the biggest we have had so far: https://t.co/LGYbag5UEe
Remember to Drop, Cover, Hold. pic.twitter.com/EX0V25T2yb