Many times during this Covid-19 madness we have helped answer audience questions. Often you get one and think, 'that will be straightforward'. Then sometimes you get one that is anything but easy to answer. 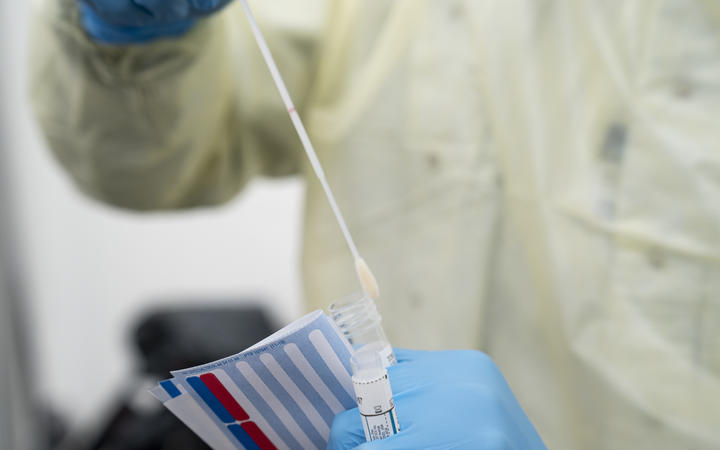 More than two weeks ago an RNZ audience member got in touch with the first question below, asking if we could put it to the Health Ministry.

What follows on from it is the follow-up questions over the course of 12 days.

Do you have information on the percentage of false negatives that can occur with the Covid-19 testing being done in NZ; that is, of the numbers of tests that come back negative, what number are actually incorrect (show a negative when in fact the person is positive for Covid-19)?

"Detection of SARS-CoV-2 varies primarily according to the stage of illness and anatomical site tested. The vast majority of people tested are those with mild symptoms in the community. We don't have a gold standard to compare results with as we are not performing invasive samples, CT scans etc. so are unable to give a precise sensitivity for their use in community public health interventions, though the reduction in new cases and trends in positivity rates speaks to their utility in this setting."

I think I need to re-pose it (the original question) a little. The direct question I think still remains: have there been false negatives? If so, how many as a percentage of tests?

"This is not data that we have centrally. Clinicians recognise that detection is harder from the upper respiratory tract and in order to mitigate this, patients who test negative will either have further testing performed or be treated as probable cases based on their other investigations.

"An example is seen in Case 1 where the patient was admitted and tested. Two earlier tests were negative for Covid-19. A further test using a more specific sample proved positive as is noted here:

The first case of COVID-19 is now confirmed in New Zealand in a person in their 60s recently returned from Iran. The results of the test were formally reported to the [www.health.govt.nz Ministry at around 4.15pm this afternoon]."

The above response says the information is not held centrally. Where is it held? Is someone collating and analysing it? Is it an important part of the overall data given how much damage one or two cases undetected in the community can cause? Are there other known cases, beside the reference above, where people have tested negative only to be confirmed positive later on? If so, do we know how many and if they have been part of any cluster activity?

"The public health units and hospitals will hold the information - it is likely they will be collating, learning from experience and new literature; however we can't give specifics on each area. Peer-reviewed journal articles tend to be written up when there is further information available on the topic.

"Interpretation of a SARS-CoV-2 (Covid-19) lab result needs to be considered within the overall patient context such as time since last contact with a probable or confirmed case, presenting symptoms, duration of symptoms, type and quality of sample, and time sample was collected relative to symptom onset in the person. A negative test early on following exposure to a confirmed case does not preclude someone from developing symptoms and having a positive test later in the fourteen days since last exposure to the case, and would not be seen as a false negative. For these reasons, we are not able to report on the number of false negatives."

I suppose the general question remains, is the Ministry happy with the efficacy of the tests?

"With regards to the efficacy of testing, yes, the Ministry is happy, but we are also continuing to review evidence, available products and processes to look at any further improvements and modifications that we can make.

"I have asked one of our labs to respond further with regards to improvements etc. and I'll come back to you on that."

That would be great re the labs. The earlier answers tended to suggest that no evidence was held by the Ministry, so any lead on what those reviews have found/are finding etc?

"We believe that PCR tests are fit for purpose in diagnosis of disease in both the hospital and community setting but recognise that, as with all tests, they have their limitations. Those limitations are primarily that it is difficult to detect disease late on in infection, and that the easily available places in the body to test-the nasopharynx and throat, are not where the virus replicates as infection becomes established.

"The way laboratories and public health overcome these limitations is by using sputum samples for hospitalised patients where nasopharyngeal or throat samples are negative but high suspicion for disease remains, and from a public health perspective, calling highly suspicious cases (based on clinical and epidemiological grounds) with negative tests a probable case."

Does your head hurt? Mine does. To summarise, I haven't yet been able to deduce if false negatives have been an issue. Or, indeed, if they are being tracked appropriately.