Legal action is being pursued against Royal Caribbean cruise line over last year's deadly Whakaari/White Island eruption as extraordinary new details of the effort to rescue survivors are revealed in the ABC programme Four Corners. 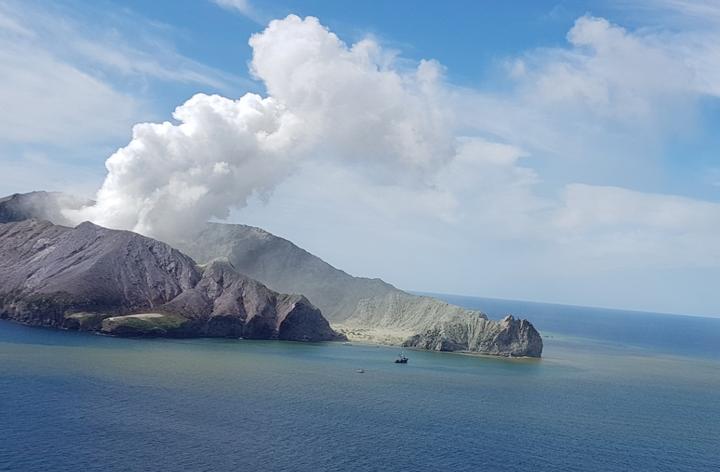 Four Corners has uncovered the chaos and disorganisation in the hours that followed the Whakaari/White Island eruption, which killed 21 people and left many others badly injured.

It was only thanks to the efforts of nearby tourists and several local pilots that survivors made it off the island alive on 9 December 2019.

Nineteen of the 21 people who died were from the Ovation of the Seas cruise ship.

Rita Yousef's law firm Stacks Goudkamp has been hired by passengers and family members to pursue legal action in Australia against the cruise operator Royal Caribbean for alleged negligence, breach of contract, and breach of Australian consumer law.

"It was completely preventable. It shouldn't have happened," she said.

"It's had an amazingly horrific impact. People have lost loved ones. They had to witness them in hospital having been completely burnt, being completely unrecognisable from their horrific burns, and people are having to somehow pick up the pieces," she said.

The tourists booked and paid for their trip to Whakaari/White Island through Royal Caribbean.

"They were told in the brochure that all they needed to do if they were attending this tour was to wear enclosed shoes," she said.

Volcano monitoring service, GNS Science, had raised the alert level for Whakaari/White Island from one to two in the weeks before the eruption, which is the highest level it can be when it is not erupting.

Ms Yousef said Royal Caribbean told the passengers on the Ovation of the Seas "absolutely nothing" about the possibility or the risks of an eruption.

"At the very least, Royal Caribbean, which held itself out to be responsible for this tour, should have been monitoring this, and communicating with participants as to the risk, and giving them the choice, an informed choice to decide not to go because of this risk," she said. 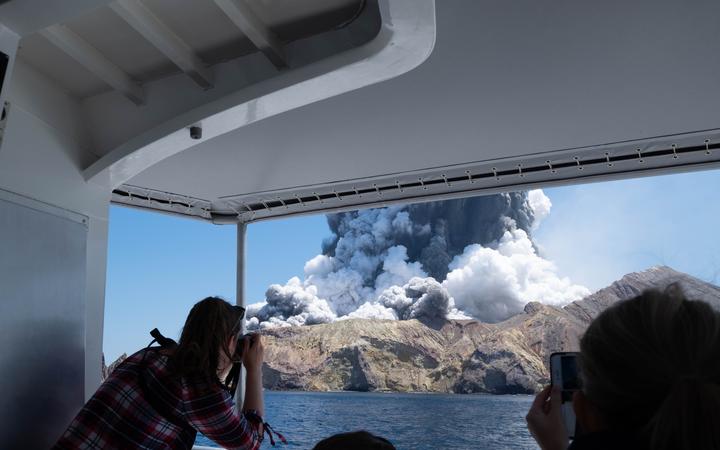 "But what appears [to have] happened is that nobody [at Royal Caribbean] was monitoring or taking this level seriously."

In 2016 an eruption that happened overnight gave scientists a warning of just how dangerous Whakaari/White Island could be.

Graham Leonard from GNS Science, the body tasked with monitoring the volcano, said nobody was on the island at the time.

"It produced a surge out across the ground, it probably threw quite a lot of rock and ballistics," he said.

GNS Science warned if people had been on the island at the time of that eruption, they would have been unlikely to survive.

Those warnings were not heeded, and tours continued.

The brochure promised visitors would "get close to the drama".

When Whakaari/White Island volcano suddenly erupted in December last year, 38 people from the Ovation of the Seas cruise were on the island.

They were being led by guides from local company White Island Tours.

The eruption caused a column of black and white ash and debris to shoot more than 3km into the air.

One of the tour guides yelled for people to run but they could not escape in time.

Passengers on another White Island Tours boat, the Phoenix, were just off the coast when they saw the eruption and started filming it.

As the black ash cloud rolled over the side of the island and started barrelling across the sea towards their boat, the passengers' awe turned to horror. 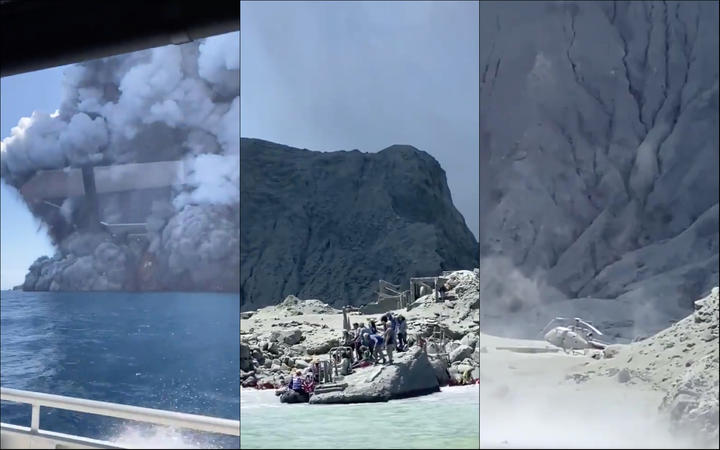 Images taken from a boat close to White Island shows a damaged helicopter and survivors of the eruption waiting to leave the island at the edge of the water. Photo: Twitter/Michael Schade

Geoff Hopkins was on the Phoenix with his daughter Lillani Hopkins.

"The cloud that was going up had obscured the sun so we were in the shadow of it. It went dark. It went very, very sinister quite quickly," Hopkins said.

As the Phoenix came closer to the shoreline they could see injured, ash-covered survivors clustered on the jetty. Others were in the water.

Crew on the Phoenix quickly launched a dinghy to ferry survivors back to the boat.

One of the first people on the boat was a tour guide who had been wearing a short-sleeved t-shirt and shorts.

"She had severe burns to her hands, her arms, her legs, due to her clothing," Hopkins said.

The survivors had different degrees of burns depending on what they were wearing and how thick the fabric was.

"Then the most severe burns were ones that had no skin left. It just kind of dripped off them like wax," Hopkins said.

Their rescuers had no professional experience in treating severe burns but they immediately started filling up bottles and containers with fresh water to give to the victims and pour on their skin. 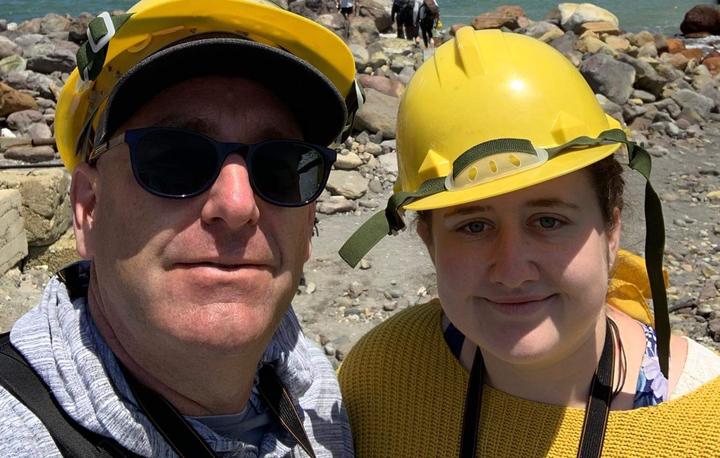 Brazilian tourist Aline Kauffmann was among those helping.

It took about an hour for the Phoenix to make it back to the mainland. During that time the tourists did everything they could to keep the injured alive.

Kauffmann remembers one elderly victim had started to turn purple on the journey back. She hugged him until he got colour back in his face.

"I think it helped," she said. 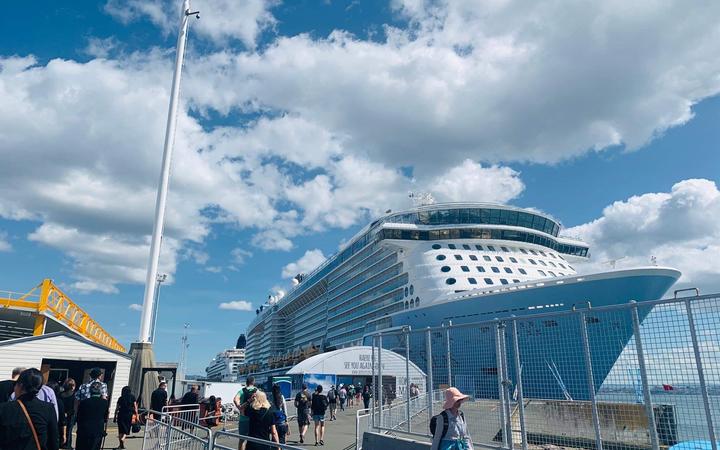 The Phoenix had more than 20 victims on board, but there were 20 others who still needed to get off the island.

On the mainland, pilots from two local helicopter tour companies saw the eruption and raced to help.

When they arrived they found the victims scattered across the crater floor. Some were dead but some were still alive.

Pilot Tim Barrow said the air was filled with dust, ash and gas.

"I don't know how to describe it. Apocalyptic, was probably the most apt description," Barrow told Four Corners.

A pilot from Kahu helicopters, Tom Storey, said they tried to keep the victims comfortable until paramedics arrived.

"We got to the victims, started helping them, putting on gas masks, giving them water, putting them in the recovery position, making them as comfortable as we can," Storey said.

"Just reassuring them that we are there. 'We are there to help and we are going to get you off the island' and 'you're not alone'."

While trying to comfort the survivors, the pilots learned over the radio the Westpac rescue choppers and paramedics they had been waiting for were not coming to Whakaari/White Island.

The pilots decided they would bring the survivors back themselves.

The conditions they were working in were toxic.

"Without a gas mask it was really hard to breathe, almost impossible to breathe," Storey said.

"Some places there was a foot-deep of ash, halfway up to your knee, that you were running through.

"It was still raining ash on us but like I say, adrenaline took over and you're given a job, and you're focused on the job at hand and that's what you did." 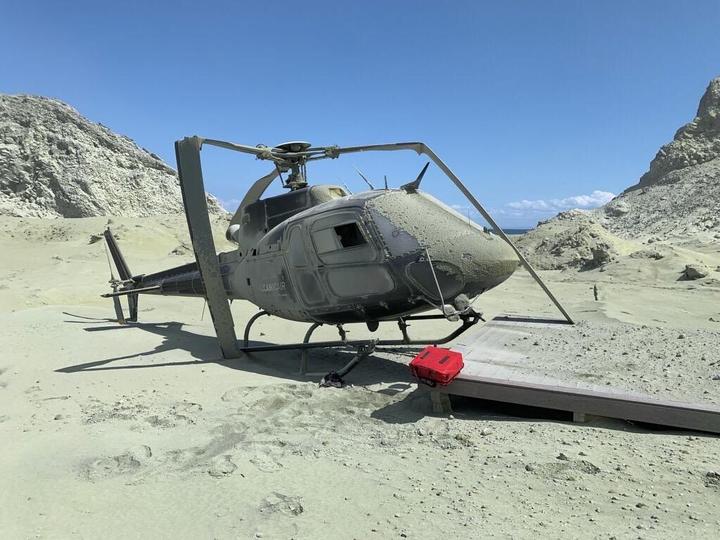 They loaded 12 people onto three helicopters.

"I know of one person that I carried that was alive when I was carrying, but by the time I'd got to the helicopter I had a suspicion that they may have passed away," Storey said.

"I felt hugely concerned for the two survivors that we had on board. They weren't in good shape and I wish I could have sped that flight up 100 times and had those guys back at Whakatāne in a millisecond, not the time it took," Barrow said.

When Barrow landed on the mainland, one of his two passengers had died.

Despite the risk of another eruption, Storey stayed on the island to search for more survivors.

"I found two girls that were there at the time. Unfortunately, they passed away not long after I'd found them," he said.

Storey had been on the island for about an hour when the Westpac search and rescue paramedics finally arrived by helicopter.

He told them there were eight bodies still on the island.

On the Ovation of the Seas, families only found out about the eruption hours later.

Four Corners understands one group of passengers learned what happened by turning on the TV and seeing news reports of the eruption.

In another instance, Four Corners was told that cruise staff rang the room of a family who had loved ones on the island to ask who was in their cabin, not mentioning the eruption or why they were asking.

Royal Caribbean staff brought the people who had missing loved ones into a room but gave them very little information about what was going on.

"There are accounts of people who were left in the dark for many hours while their loved ones were in hospital," Yousef said.

The survivors are at different stages of recovery - some are still in hospital and others are at home, facing months or years of rehabilitation. 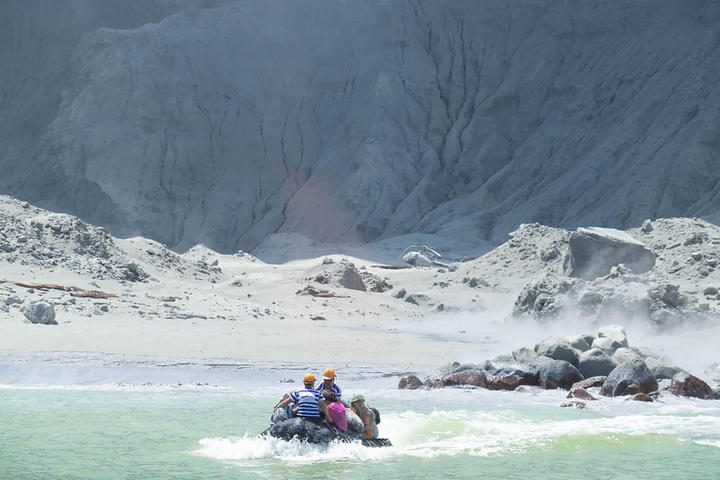 "People are having to somehow pick up the pieces in terms of figuring out how to live their lives without, for example, a main breadwinner who's now gone," Yousef said.

Yousef said for some families getting justice was important.

"Money's important because it does help people to get on with the basics of life but it's also about closure," she said.

"It's also about finding the answers that we don't currently have and it's also about achieving improvement in the processes of companies like this who are taking other people's safety in their hands."

In a statement, a spokesperson for Royal Caribbean said since the eruption the company has "focused on providing care and support to passengers, their families and crew that were impacted by this event".

"The details of the tour are the subject of two separate investigations in New Zealand which we will be fully cooperating with and we are unable to provide further details at this time."

The New Zealand government has warned its investigations into the tragedy could take more than a year.