Cracks start small. Molly* was working at a hospital as a nurse assistant when Covid-19 struck. That's an essential service, so you'd think she'll be right. 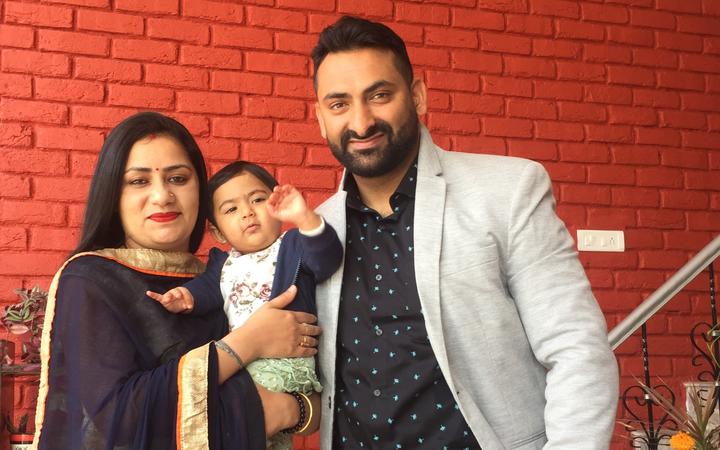 Niraj Thakur, his wife Anuradha and daughter Kiarra are stuck in India and worried about the future. Photo: Supplied

But she's not considered essential now.

She was on a casual contract but working nearly full-time. It had been that way for years. Now her hours have been cut to a quarter of what they were. There are bills to pay; people to support.

It'll be OK. Surely she can get the wage subsidy to help out. Sorry, her boss says, government staff aren't eligible. She knows lots of other people in the same situation.

The crack just became a loophole. What can Molly do?

Erin* is an essential worker but lives with an older relative who is more susceptible to Covid-19. She doesn't want to make her sick.

She was relieved when the government announced the essential worker subsidy scheme. Unfortunately, her workplace says because they aren't seeing a 30 percent fall in revenue they can't apply on her behalf.

Work and Income have told her she should be able to get it but they need an application from her employer. Confused? She is. And worried.

Louise Schutte's parents are in a similar boat. Except they are older than 70, and both were working.

Her mum was helping the elderly too, so she's been told to stay at home. Her dad should be at home, though he's still on call. He went to a job the other day.

Louise says her mum's company have told her they can't apply for the subsidy because there is no revenue drop. Meanwhile, she doesn't get paid anything. Even though she's following the rules.

Niraj Thakur, a work visa holder, is on parental leave and stranded overseas after he and wife Anuradha took their baby Kiarra to see family in India. The timing had seemed perfect, but then Covid-19 struck.

He's due back at work in May but that appears an impossible task. Anuradha faces losing her part-time job as a beautician. Flights are too expensive and the lockdowns are making movement impossible.

Can they get the wage subsidy if they're not here? The law says the obligation to pay wages only arises because an employee is ready, willing and able to work.

They don't meet that definition. They're not here. The life they were building in New Zealand seems threatened.

"We have been left with no option," Niraj says.

Sam* and his wife are New Zealand residents. They left in late February to visit family in Asia and were due to catch a return flight a month later. The day before departure, everything was cancelled.

His employer is being supportive, holding his job open. He's grateful, but there is no money being paid at the moment. He's out of the country. They're stuck in the loophole.

"We are staying at a relative's home here and he is helping us with food and some essentials but obviously we don't want to burden anyone for much longer.

"New Zealanders overseas are running out of funds and even food in some cases."

Megan has worked for a council-funded organisation for many years. There's no work at the moment though. It's all shut up.

She's turned to all the sensible places for advice but she just gets told government-funded employees can't get the subsidy. She feels forgotten. Left behind.

"This seems like a great anomaly to those of us who have been committed workers under their care. Why should we fall into this crevice?"

These cases are a few examples of those we have received. We have answered hundreds of questions from people who feel like they are standing on the precipice.

While the impact is across society, women appear particularly worse off. Many work for government-funded entities in "casual and part-time work" arrangements.

Ironically, these are often more full-time in practice i.e. a person like Molly is working a full week despite being a casual worker. Or they regularly work a certain number of hours each week for a long period. This is not the definition of casual work, despite what a contract may say.

The government has moved quickly to help many but anomalies abound. More are likely to come.

One moment it is just a crack, the next minute some say they're drowning in a loophole.