A family left out of pocket for a Europe trip is pleading with their agency to uphold a contract and refund their cash. 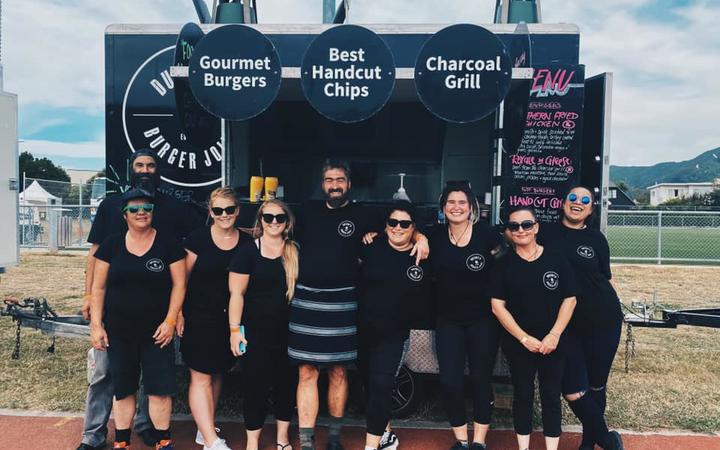 Food truck operators Karli Mitchell (centre right) and her partner Rutger Richter (centre left) have had to cancel travel plans due to Covid killing their income, and just want a refund they were promised on their travel. Photo: Dutchy's Burger Joint / Supplied

But a lawyer told RNZ, in this case, the family should get what they're owed.

Karli Mitchell and her Kapiti family of four were meant to head to Amsterdam in June, and spend two months road-tripping from the Netherlands to Romania and back.

But the family run a food truck and, by mid-March, they could see the writing on the wall.

They made the call to cancel the trip.

"It seemed like almost overnight all of our events were cancelled and because we run a food truck we weren't sure if we would meet our savings target."

In an email seen by RNZ, STA Travel told Mitchell that, because she was in the agreed timeframe, she could have a refund.

"Then the next email I got was, no, we've changed the policy, I can't refund you, I can only leave this credit for you that you have to use within a year's time."

The emails were six days apart, and referred to a new "blanket policy" which meant no refunds would be provided.

The refund - without deposits and non-refundable bits - would have been more than $5500.

But STA New Zealand manager Sam Morrah said it was partly bound by the decisions airlines were making on refunds.

"You've got some airlines who originally said that they would offer refunds, and then have to change their stance.

"It's very important that we follow their advice but at the same time STA has had to come up with its own policy just to make sure that we are sendin out a consistent message."

The Kapiti family was due to fly the bulk of their trip with Singapore Airlines, which has advised customers the unused portion of their tickets "would be retained as travel credits" for rebooking anytime before March next year.

Morrah said despite what Mitchell was told, it was still a case of wait and see.

"The conversation about refunds is not off the table. Best case scenario is we'll all be back up and running in the short term, in which case we'll be in a much better position to be talking about refunds."

In a statement, a Commerce Commission spokesperson said if cancellation is due to government action such as the lockdown, people are unlikely to be entitled to a refund under the Consumer Guarantees Act.

But it stated: "If the contract states that a refund will be provided in the particular circumstances at issue then the provider must offer a refund."

But a lawyer believed that, in a court, a judge would probably rule in favour of the family.

Commercial barrister Alan Sorrell said the contract was confusing in its wording, but in this case the government border restrictions were irrelevant.

"It's just a question of a right to refund, and a supplier changing its policy wihthout the agreement of the traveller. So I think they have a good claim for a refund."

Mitchell said these assurances were great, but they won't pay her bills.

"We just have no income for the forseeable future and we were within the agreement that we signed, so it just rips your undies.

"You think something is a sure thing but it's not, and I guess that's true of the world over at the moment."