The police watchdog says Christchurch police officers used unnecessary force when they hit a man on the head with a gun and let a police dog bite him for almost a minute. 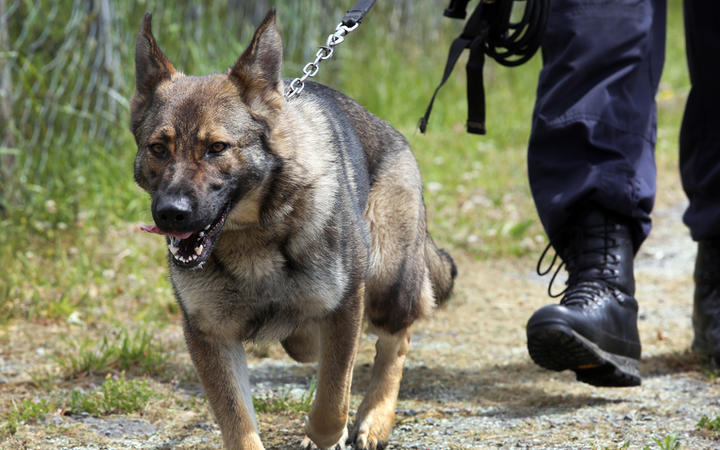 The IPCA was particularly concerned about the use of a police dog and the length of time it was allowed to bite, the report said (file picture). Photo: RNZ / Diego Opatowski

The man was arrested early in the morning on Saturday 30 September 2017 after driving dangerously through the city in a ute with four passengers and failing to stop when signalled.

Several police cars chased the truck for 21 minutes, while its occupants threw building tools out a broken window, into their path.

The pursuit came to a stop in Latimer Square when the ute crashed into a police car.

The Independent Police Conduct Authority said officers did not need to arm themselves, or use dogs or forceful tactics when they arrested the driver.

Its chair, Judge Colin Doherty, said the pursuing officers had the time and resources to formulate a plan for when the ute came to a stop - but did not, resulting in an "uncoordinated and overly aggressive" response.

"The Authority is particularly concerned about the use of the Police dog and the length of time it was allowed to bite," the report said.

"It was unnecessary to use the dog, as other officers were available to help restrain the driver. More concerningly, it appears that the dog handler intentionally yanked the Police dog several times during the bite, partly to train his young dog. This exacerbated the driver's injuries."

The IPCA said the pursuit was justified, but officers did not follow policy during the chase so they put the public at risk.

In a statement, the police said several of the officers involved had since received more training.

Canterbury District Commander Superintendent John Price said the incident was a challenging and dynamic one but some of the officers' actions were unsuitable.

He said the arresting officer's actions had been dealt with as a performance and training issue, while the actions of the dog handler were addressed by a supervisor.

Two other officers involved in the arrest were given "further training and discussion".

"Our officers are committed to doing the right thing with the right intent in their work to protect the public and make sure people are safe. However we accept that during this incident there were some issues with some aspects of their response," John Price said.