Auckland greengrocer Jack Lum has been forced to close its doors as it's not considered an essential service because a supermarket is nearby. 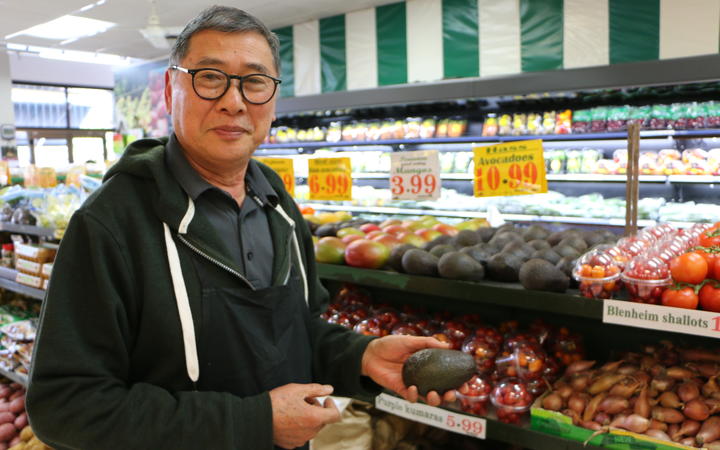 Mike Lum, the son of the owner, questioned how equally the trading exemption for essential services was being applied, when other fruit stores and supermarkets with the same products were able to stay open.

"It's fair if the guidelines are one size fits all, but when you're just cherry picking who can open and who can close, no it's not," Lum said.

The shop stocks about 90 percent fresh fruit and vegetables, as well as some tinned foods and drinks.

He said they were visited by police officers on Tuesday this week and told they were doing everything right and could stay open. Lum said they were limiting the number of customers, and cleaning stringently.

But on Thursday, police visited again and told the owners to close the shop immediately. Customers waiting in the line objected and said this is their local grocer and stocked other items not available elsewhere.

"The only excuse they could come up with when they arrived yesterday was: 'we do not deem you an essential service because of your proximity to the supermarket, 100 metres over the road'. That's all they had... Everything they're doing is quite blurry," he said.

Lum said police stayed there until they'd loaded the shop's stock into trucks and taken it all off site.

"The shop's naked now, everything's gone. It's just the shelves."

He's worried this may spell the end of Jack Lum's.

"We're a pretty big operation. To stock it all back up again is probably $50,000 or $60,000, plus over 500 man hours to actually do everything and get it ready for sale. So [the decision to reopen is] not something to take lightly."

The family-owned store in Remuera been open for 50 years and, along with other small grocers, has increasingly been under financial pressure from corporate supermarkets.

He said they were running at a loss during the lockdown.

"Dad being Dad just wanted to provide a service for his community."

"Earlier in the week they were told they could continue to open, and then completely contradicting that, the police showed up on Thursday and told them to shut down with no notice," Seymour said.

"It's symptomatic of the government not giving clear directives or rules, and it's creating carnage. It's not very expensive for them to re-open even if they were given permission, and there's a huge injustice that Fruit World just across the road in Greenlane is able to remain open."

Seymour said this is an issue of equity.

"There are a small number of large businesses being rushed off their feet, and I don't begrudge them for the service that they're offering.

"On the other hand there are a lot of smaller retailers, people who will have mortgaged their house to create working capital for their business, who risk losing everything as a result of the government's indecision and often illogical conclusions about who should be able to be open in order to fight Covid-19."