Walking, stretching, stealing socks, playing fetch, daytime napping, farting and ignoring all social distancing rules - this is the tough life of a pet in lockdown.

For as long as the lockdown lasts our sports journalist, Joe Porter has committed to posting a photo a day of his beautiful dogs on their recent adventures. 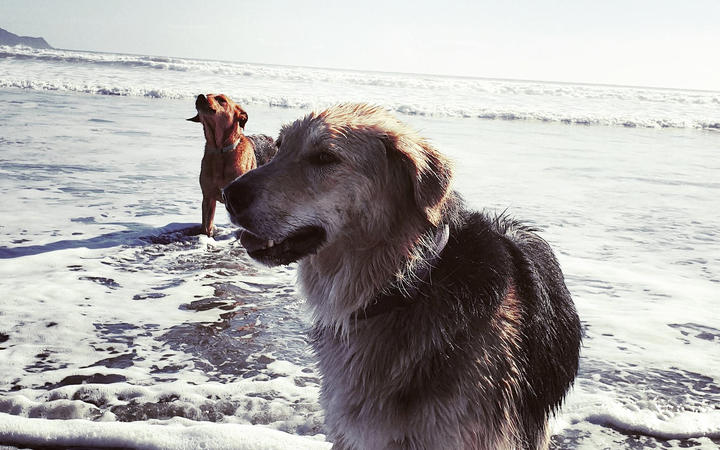 We loved how these pictures brightened up our timeline, and asked for pictures of how your pets were enjoying more time with you.

Jennie Gutry sent in this photo of Max, who is now acting as Bureau Chief at Foxton RNZ, and keeping an eye on reporter in lockdown Katie Scotcher. 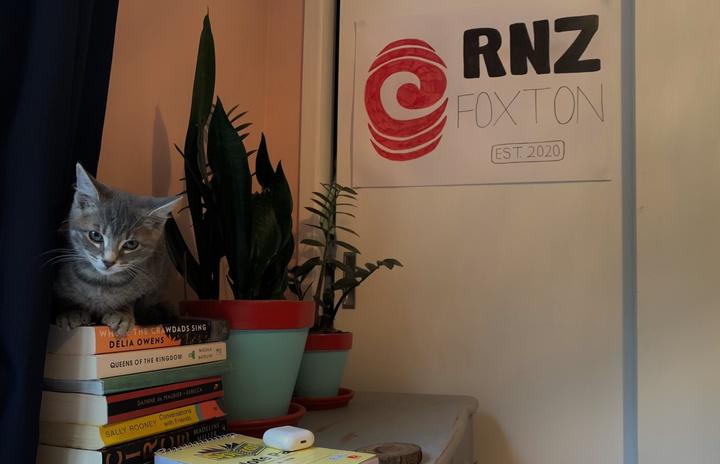 Josie Campbell has a fairly territorial house bunny called Rabs Guy who is slowly adjusting to her being around all the time.

"The most upsetting thing for him is that I keep getting in his space, and he lets me know about it - often by sitting under my chair and farting. I was doing a streaming yoga class the other day and he was so perturbed about me being down on the carpet that he climbed on my back while I was doing cobra pose, stood on his hind legs and leant on me when I was doing warrior two, and repeatedly sat between me and the screen."

Josie's guinea pigs Wally and Stan don't have a clue that anything's different. Today they got fanmail through the post from their seven year bestie Eva and the likenesses are outstanding. 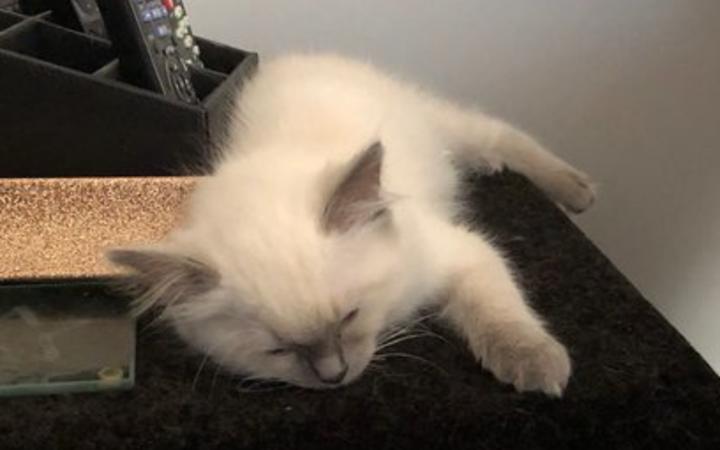 Jane Gro says their says kittens are learning what it's like to snooze in front of the fire for the first time in their little lives. 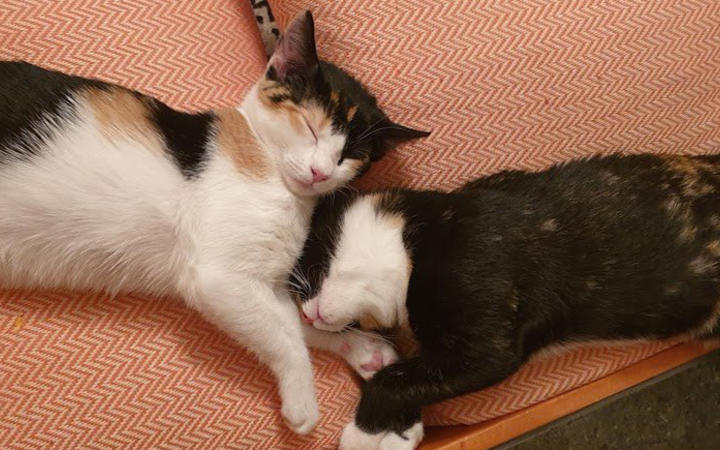 And Lachie is getting in on some of that nap action.

Lachie is loving it. Snoozing away beside me while it pours with rain outside. pic.twitter.com/yaW8z3Gs0f

Koro Vaka'utas' cat Fluff has been doing some cat-yoga stretches. 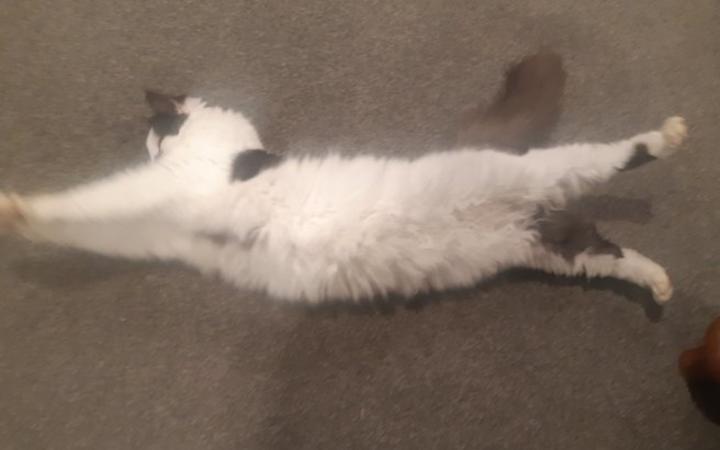 As has Sirius. Perhaps they were streaming the same free yoga class on Instagram.

Lockdown has been getting to us all a bit today, but Sirius definitely isn’t bothered. I’m glad to have Jacinda’s calm voice to listen to.

Francesca shared this image of Iris and Theo. She says Theo is still a naughty kitten and really wants to be friends with Iris, who only tolerates him at the moment. It appears there is a breakthrough in their relationship, as it is rare for them to be napping so close together. 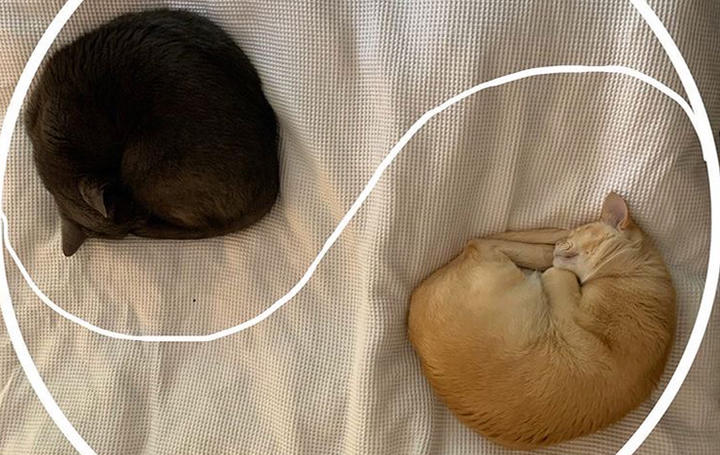 Iris and Theo take a nap together Photo: Supplied

Chloe Smith sent in this picture of Coco the Sheep, who has been enjoying the family's company by getting glammed up for a photo shoot and getting heaps of treats. 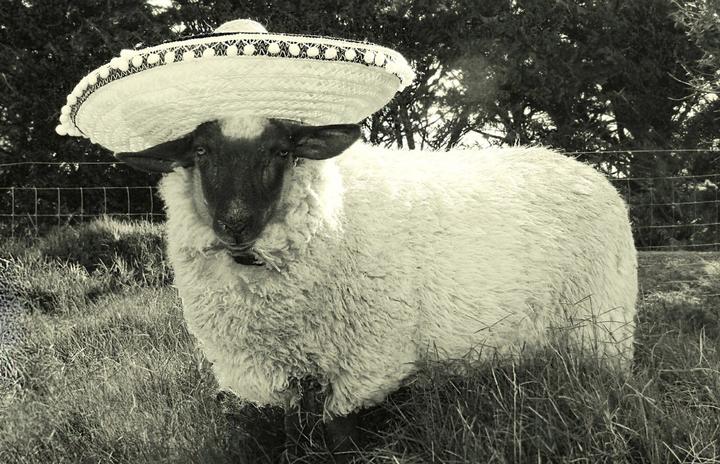 Ada was “working” from home with us last week. This was her dressed up for serious business calls. The team think she’s the CFO. Chief Floof Officer. #WoofingFromHome pic.twitter.com/Mp6TqZ409P

Meanwhile, this kitty is getting involved in the teddy bear hunt fun.

Brooklyn the Dog is a huge American baseball fan, and pretty bummed about having no baseball to watch. 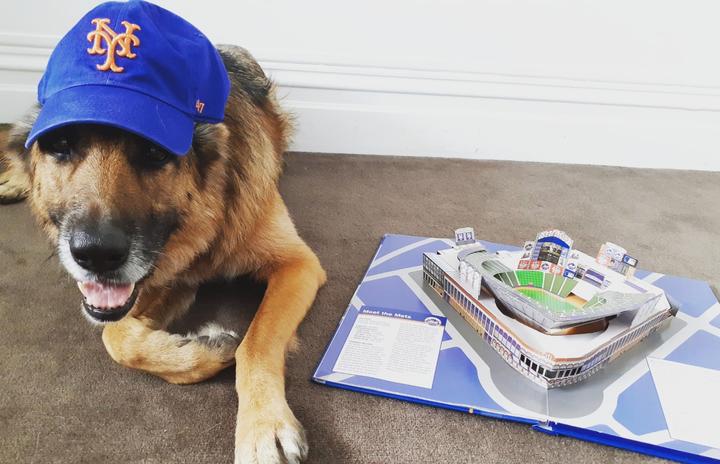 Brooklyn the dog, lamenting the lack of baseball. Photo: Supplied

There's a game of hide and seek being played here.

Dogs loving it....whereas wee George perhaps not so much pic.twitter.com/y3gBQhA89F

Bruno has decided if there's no sport on the telly, he'll create his own fun with some hallway cricket.

Bruno in the slips in a game of hallway cricket. pic.twitter.com/1vdmBVjhfw

And this doggo has decided to take a wee rest with tennis ball still in mouth.

This fluff-ball has started collecting socks.

MonstrosKitty has been enjoying having more people to snuggle up to.

Two metres apart rule? It's OK, these doggos are staying inside of their bubble.

What’s better than one dog? pic.twitter.com/j7vUL1UynV

And these pets are just busy looking cute.

Did someone call? Iggy is willing to answer it. pic.twitter.com/I5pprL0RQS

Not so much enjoyment this morning. She had a bath. Greta the gorgeous smells good again. pic.twitter.com/1SMoUYxJWd

Before and after I reach for my socks, because he knows what that means pic.twitter.com/ANMAxuH2sa