Millions of dollars worth of chilled meat may be headed to landfill if independent butchers are not allowed to reopen within the next five days. 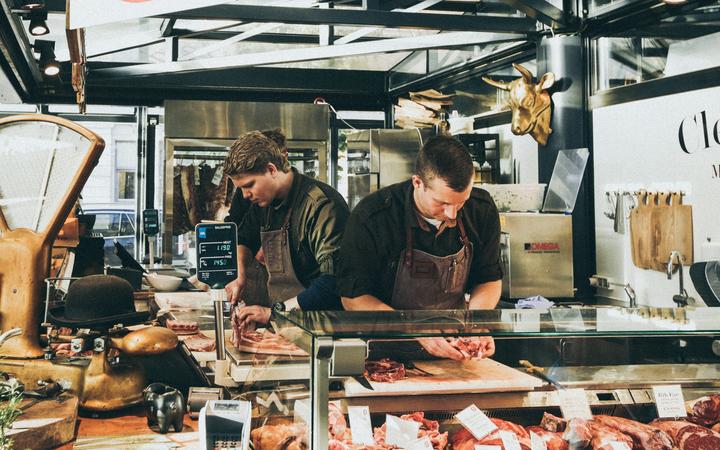 The Aussie Butcher group says businesses that cannot process or freeze meat stockpiles will have no choice but to dump it.

Group principal Keith Oddy said butchers stocked up ahead of the Covid-19 shutdown believing they would be deemed an essential service only to find out at the last minute they were not.

He said many independent butchers would be left with product they could not sell.

"Some shops like a couple of mine they've got big freezers where you can freeze it off, but you're still caught with a lot of stock and a lot of fresh stock. Little small butcher shops wouldn't have those facilities so they're in trouble."

Oddy said the stockpile could be worth millions of dollars.

"In my shops there's probably $250,000 worth and if you go through the 150 butchers shops in Auckland and about the place there'd have to be $7 million to $8 million worth."

He said there was only a small window left to save the product.

"If it reaches a stage where they don't let us open ... I thought they might've announced we could ... but they haven't and I think a lot of it will be dumped to landfill.

Oddy believed butchers with enough floor space to observe social distancing protocols should be allowed to reopen - initially for four days a week.

Hawkins said government communications around the shutdown caught butchers out.

"They had just had their biggest days in their histories of their stores. Bigger than Christmas. And because of that they stocked up significantly after the essential services were announced and then obviously within a couple of days that had be refined back to the supermarkets and dairies leaving our guys with a lot of excess product."

Hawkins said Retail Meats had been communicating with the government about the unintended consequences of the ruling such as the welfare of pigs that had not been slaughtered, among other issues.

"So we're very much hopeful we may get some answers from the government soon but there isn't an answer just yet but hopefully we'll hear something soon."

She said the was still hope independent butchers could reopen before meat had to be dumped.

Meanwhile, Taranaki business Texas BBQ Foods is offering to process and vacuum pack as much of the stockpiled meat as it can - free of charge.

Chief executive Ash Peters said the company would then distribute it to the needy and charities.

"We see that meat just sitting in the chillers going off is an absolute waste especially when there's so many people out there that who have financial hardships coming their way. In the next coming days it's going to be quite devastating for them.

"We didn't want to see that meat go to waste. We wanted to see how could we capture that product."

Peters said there had been some interest from Taranaki butchers and the company was keen to hear from others.

But Oddy, while acknowledging the sentiment of the Texas Foods' offer, said there were roadblocks the would prevent stores taking the offer up.

"I don't think there'll be a big uptake because butchers in essence are barred from their premises so you can't go in and take it out according to the rules with the lockdown."

The Ministry of Business, Innovation and Employment said the more businesses that were open, the harder it would be to contain the spread of Covid-19.

It said butcheries had been deemed non-essential as the products they sold could be bought from supermarkets.

The ministry said it continued to monitor what constituted an essential service and these might change during this period of shutdown.