Courier drivers for New Zealand Post in Wellington say the company is not doing enough to make them feel safe as they work through the lockdown.

Some workers said they had only been given a pair of gloves and a small bottle of hand sanitiser, and up to 100 people are being forced to share a few, dirty toilets. 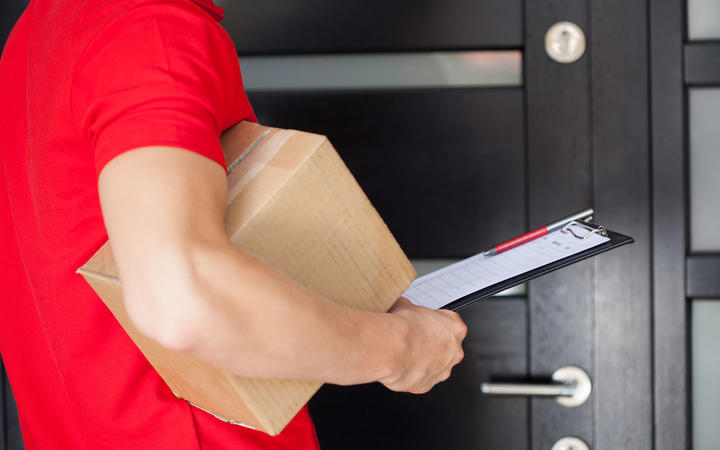 They said they were not given the option of not working, and catching Covid-19 was constantly at the back of their minds.

Wellington courier driver Meyer Peteli said the past week had been his busiest ever, as New Zealanders panic-bought before the lockdown.

On Monday, Courier Post staff were advised to deliver parcels without touching clients.

But Peteli said they had not been equipped to keep safe.

"It was yesterday that we just got a little baby hand sanitiser, but before that, we honestly, the courier drivers, we had nothing," he said.

"They gave us gloves and I tried to wear the gloves, but they started cutting the circulation in my blood because those bloody things are too tight."

Peteli said they had not been briefed at work about what safety precautions they should take as they worked through the next few weeks.

And to make matters worse, the fleet managers locked their office doors on Monday, keeping other workers out.

"They had signs up on their doors saying that we couldn't use their facilities, for example making a coffee, washing our hands, using the water filter, using their toilet," Peteli said.

"We had to go down to another facility where there is so many people that use that toilet, use that water filter, it is honestly filthy."

Peteli said it meant up to 20 people in the management office have their own facilities, but up to 100 workers at a time are now restricted to sharing one kitchen and a few toilets.

He said it had increased tension in the depot because workers were under the impression that they were less important than management.

Another courier driver, who does not want to be named, has described the workplace as "rough and raw" and safety measures had not been adequately ramped up.

"For this organisation that we have been working for a while to not even have a plan, it is just a bit of a shock," he said.

"It is paru as down there as well but being a contractor, I am just looking after myself - so I am making sure I have got all the gears, but not everyone down there has got the gears to keep clean.

"Health and safety is huge and it just ain't there."

He said there was one sanitation area, and he feared that his workplace conditions were increasing his risk of catching and spreading Covid-19 on the job.

"You would not think we are working under an Alert Level Four lockdown."

NZ Post said it shared safety information with staff this week that highlighted the need for social distancing, washing hands and staying home if unwell.

The email details the way the virus is spread, and explains that face masks are not recommended for couriers, and more alcohol-based sanitiser will arrive in a couple of weeks.

The company said it had implemented new processes, shifts and break structures in its mail and parcel processing sites.

But another courier driver, who wanted to remain anonymous, said the changes were not effective and it was difficult to keep two metres apart in their line of work.

She said the health and safety measures were not up to standard and their level of communication was not good enough.

"It just feels like they don't care about you," she said.

The woman said she was under pressure to work, and had sent her children to stay with their grandparents for the next few weeks to protect them if she got sick on the job.

"But because we are contractors, if we don't work, we don't get paid, and if they cover our run then they will charge us."

She said she has not seen the cleaner all week, and she refused to use the kitchen and toilet at work out of fear of "catching something."

NZ Post would not be interviewed, but in a statement it said:

"At the beginning of this week we starting separating our operational sites from other workers, to protect the health of our operational staff. At this site in question, this has not affected access to the toilets normally used," a NZ Post spokesperson said.

It said it had changed the way it delivered goods and staff were observing social distancing of two metres.

"Our cleaners have been identified as an essential service and will continue cleaning the sites.

"We are providing our people hand sanitisers and wipes, but as our network includes over 200 operational sites we do acknowledge that sometimes there may be delays in getting these out.

"Again, this is an unprecedented situation, and we will work harder to make sure all of our people feel safe and know what we are doing to protect them."