As they haul the goods needed to keep our supermarkets stocked and essential services supplied, the country's truck drivers are facing an unfortunate predicament: they've got nowhere to go to the toilet. 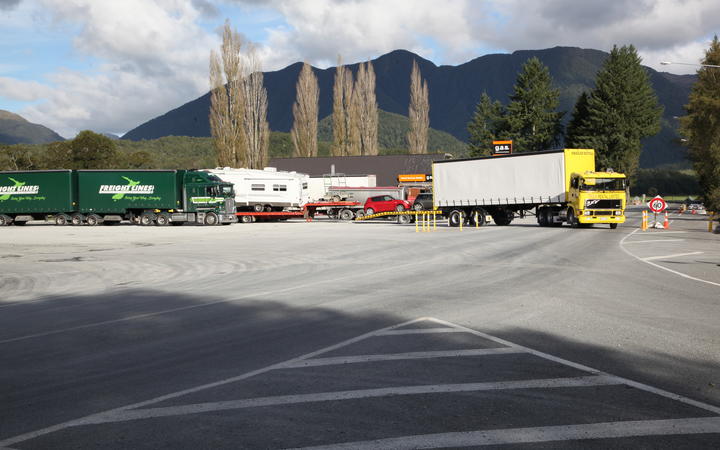 Bakeries and cafes are closed, many service stations are shut or only opening night pay windows, and some public facilities have been locked up.

As a result, the Road Transport Forum is asking the government to step in so drivers can relieve themselves.

When Doug Bell from Regal Haulage got to his pickup point in Gisborne on Wednesday morning, he was told the toilet was out of bounds because of the lockdown.

No worries, he'd just go somewhere along the route.

"Got through to Wairoa and the public toilets there are closed. Most of the garages and that are closed around the place and they're only operating out of the night pay window.

"That's a big thing for us - we go and refuel, we go to the toilet, we get a coffee, we're on our way again. It means that I couldn't go to the toilet until I got through to Napier and checked into the motel."

Yes, truckies can sometimes head into a bush on the side of the road but that's not always possible, and it is far from ideal.

"I and a truckie were talking on our way down and we said, excusing the language, 'does a bear crap in the woods? Well, yes, and so do New Zealand truckies'."

Craig McCauley, who drives for Sollys Freight in Golden Bay, said he noticed two public toilets that were locked up yesterday and three the day before.

"Yesterday I was down in Southland and, yeah, we had Mataura shut down and Clinton. I did find one open today though. Big-ups to the Ashburton District Council - the Hinds public conveniences were open and maintained to their usual standard."

For Jess Mead of Tauranga's Scarlett Trucking, the lack of toilets is pretty dire even when the entire country isn't closed.

"Being a female you can't just get out on the side of the road and do your stuff. You've got to find a toilet, but like, you know, some of the service stations aren't truck-friendly and you can't get into them," she said.

"Also, most of the time you're on a pretty strict time restraint. I reckon more public toilets would be a really, really, really good move in the right direction."

She wholeheartedly supports the introduction of portaloos at truck stops - as long as they're properly maintained.

"A lot of the people in the industry aren't exactly the cleanest. Yeah, there's a portaloo at Pokeno and I'd rather go on the side of the road," she said.

"That's something we've asked the government to look at because it is a welfare issue. You know, the people that are keeping the freight moving around the country are those fantastic truck drivers and they have needs like all of us have needs," he said.

"We've got to ensure that we've got facilities in place that contribute to public health and the comfort of those very important workers."

He offered the suggestion to the government of portaloos being placed along trucking routes.

All the drivers RNZ spoke to said that not being able to get food and coffee was another problem for drivers at the moment.

The National Crisis Management Centre did not respond to request for comment by deadline yesterday.