Supermarkets are urging people to calm down and stop panic buying as shoppers hit the aisles en masse. 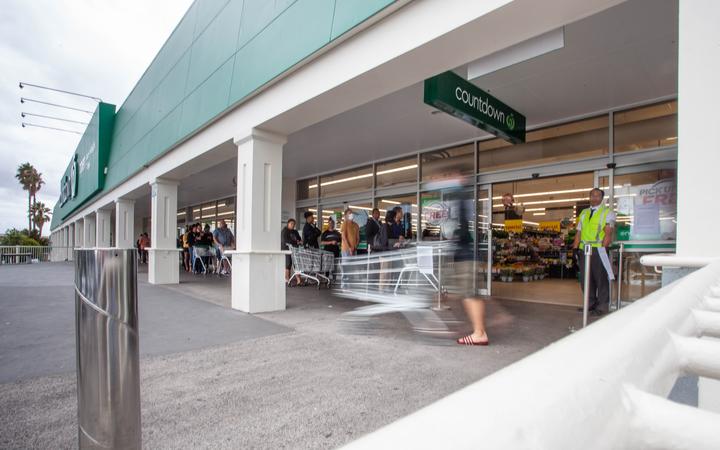 Despite the Prime Minister Jacinda Ardern asking people to shop normally, some supermarket shelves have been left empty.

Kiri Hannifin from the Woolworths and Countdown said its supermarkets nationwide are being hammered since the Government announced the country is going into lockdown in two days.

"I am asking New Zealand to please not go to the supermarket," Hannifin said.

"We will be open right though this we will stand with New Zealand in the next month or so, we'll be open every single day to look after you.

"There is plenty of food in our country we are so blessed for how plentiful we are.

"Shop normally, do not stockpile or panic buy today because it will break our supply chain."

Hannafin said the run on the supermarkets would now cause unnecessary shortages tomorrow and in the coming days.

She asked people to be kind to supermarket staff, and that some of her team have been treated badly by shoppers.

Hannifin said the company will role out changes in the coming days that will prioritise online shopping for the elderly and vulnerable people.

She said the company was working with the government about what their opening hours would be. 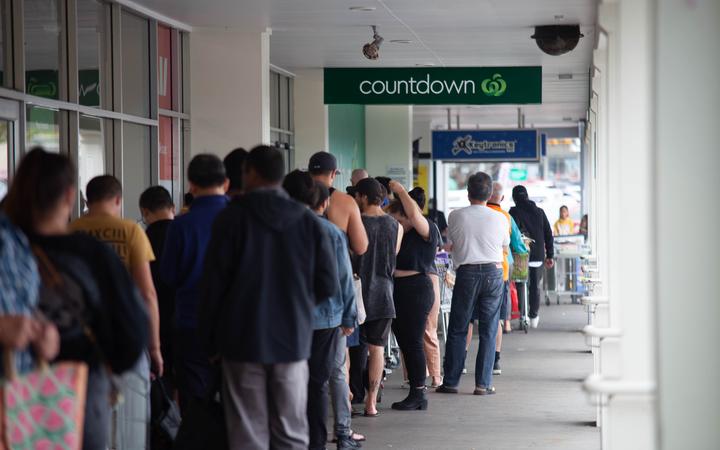 Queues at Mt Wellington supermarkets after it was announced the country is moving into alert level 3 and then 4 in the next few days. Photo: RNZ / Claire Eastham-Farrelly

A Foodstuffs spokesperson said New World, Pak'nSave, Four Square, Gilmour's and Trent's stores would be reducing their hours and extra staff protection measures would be in place.

They said people should use contactless payments like payWave, nominate a family member to shop and keep 1.5 metres apart inside stores.

"We have introduced contactless online shopping delivery for customers who are self-isolating, vulnerable or unwell," she said.

"We continue to ask customers not to stockpile; this is so everyone has a fair shot at buying their grocery essentials."

"Some customers might not have the resources to buy up or the ability to visit the store every day ... please buy what you need and be fair to others," she said.

Bread makers on the rise

Meanwhile, manufacturers are assuring people that the country will have enough supplies and there's no need to panic.

Homeware brand Briscoes' stores has been one of the hotspots where people go to get prepared for the outbreak.

Managing director Rod Duke said the run on bread makers has been going for a week or two.

"Our bread makers sales are around 10 times as what they normally are around this time of the year. We're selling a lot more cooking utensils, pots and pans, non-stick fry pans and baking dishes. It's frantic at the moment."

Duke encouraged people to order online as stores may run out of some products. He said there's already an increase on online orders as people are avoiding going out.

"Online sales have accelerated, so it would be true with us that you know more people are buying online then than they perhaps were a month or two ago."

A spokesperson said in a statement that the company supports the message from the Government and food retailers for New Zealanders to shop normal.

"We recognise how critical the food industry is to our community and we are actively working with the Government, retailers and other industry organisations to ensure continuity of supply," the statement said.

"We would like to reassure New Zealanders that we are 100 percent committed to continuing to manufacture; we have increased production in our factories to cope with the demand, and have access to the raw ingredients to do so."

The Food and Grocery Council said New Zealand will have enough supplies to get people through.

Chief executive Katherine Rich said sales have been up by between two and five times the norm.

"The main message that we continue to share is that people just need to shop normally to prepare for their families, but not to buy more than they need."

Rich said some firms making toilet paper and food items have increased their production by up to 30 to 50 percent.

"Certainly, New Zealand has good local production of a wide range of food and grocery products. And of course, the members who import products have upped their orders to bring in product from overseas."

She said the council has set up leadership support for food and beverage companies to offer advice.

"Some of our former chief executives and chairmen have volunteered to give their time to support any New Zealand food and beverage company.

"Also we're inviting any food and beverage companies to join our covert-19 updates. You don't have to be a member of the New Zealand Food and Grocery Council, you're welcome to all of our information and support as well."

The government has lifted the alert level for the coronavirus to level 3 immediately - and will move to level 4 within 48 hours.

People are asked to not panic buy and only visit supermarkets when they need to.