The Ministry of Health is giving the latest update on Covid-19 in New Zealand.

Bloomfield said both cases have overseas links, with the first man, who is in his 60s, visiting from Australia.

Health authorities were informed later that morning of the positive test and the man is now symptom free and remains in isolation with his partner.

He does not need hospital treatment and authorities here are checking with their Australian counterparts as to what information was provided prior to travel.

Bloomfield said the man had been tested for Covid-19 in Australia but his results had not come through when he flew to New Zealand. He was not tested when he came into New Zealand because he was asymptomatic when he arrived.

It was disappointing that he took the flight in the first place and at best it may have inconvenienced people or at worst put people at harm, Bloomfield said.

The eighth case is a woman in her 30s from Denmark who arrived via Doha on flight QR920 Tuesday 10 March and then flew from Auckland to Christchurch on Jetstar flight JQ225. She then travelled to Queenstown in a private rental vehicle.

The woman was unwell when she arrived in Queenstown and then hospitalised.

She is being cared for in isolation and is recovering well and being monitored by health services.

Public health authorities have identified those in close contact with her and they are being isolated for 14 days from that contact.

He said reducing the flow of people arriving and requiring isolation were important frontline tools in reducing the spread of Covid-19.

Deadline to return to NZ extended to 1am tomorrow

Bloomfield said there would be flexibility on travel restrictions so pilots do not race to get here before midnight.

Airlines have been given an extra hour to off-load their passengers before the government's strict new isolation measures come into force.

The deadline for arrivals has now been pushed out to 1am tomorrow.

He said the number of staff at airports is being increased so there is an interaction with every person coming in.

Protocols for people coming from the Pacific are still be worked on, he said.

In summary, New Zealand now has eight confirmed cases based on laboratory tests and two probable cases, he said.

Three passengers on board the Golden Princess cruise ship berthed at Akaroa, in the South Island, are being tested for Covid-19.

Two of those three have been identified as being close contacts of a confirmed case, Bloomfield said. The contact occurred before they began the cruise, he said.

One of the passengers has developed symptoms, being treated as suspected case and all those on board the Golden Princess are not allowed off until the test results are known.

Bloomfield said health authorities were looking at the planning and response needed should a positive case be identified on the cruise ship.

Canterbury District Health Board chief medical officer Dr Sue Nightingale said they started planning for how to deal with Covid-19 in January to ensure that pandemic plans were in place.

That included ensuring there was sufficient personal protection equipment available for staff and that they knew how to use it, she said. 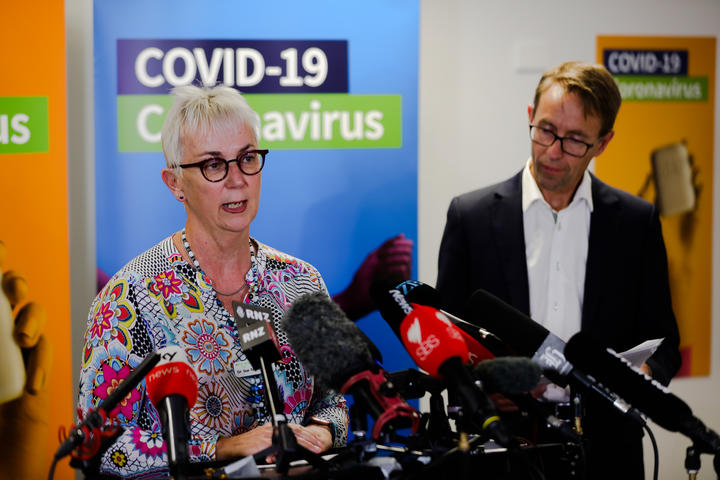 She said in her region the focus has been on Christchurch Hospital where people will be treated and it includes looking at how Covid-19 patients will be isolated from other patients.

She said they have been working very closely with general practices and setting up community based testing stations, the first of which will be ready to go on Wednesday this week.

Two shifts of staff will be on at Canterbury health laboratories tomorrow so they can do two lots of Covid-19 tests in a day, Nightingale said.

She said they have also been working with aged care homes on their plans for dealing with Covid-19.

Healthline had triple the number of calls yesterday compared to the same time last year.

Those returning from overseas and having to self-isolate are encouraged to look at advice on the Ministry of Health website.

You are not confined to your room, you can go for a walk or a bike ride, just avoid social situations, Bloomfield said.

But those who test positive for Covid-19, or those who have been in close contact with someone who has, should stay at home he said.

Yesterday, Prime Minister Jacinda Ardern announced that from midnight tonight every person arriving in New Zealand apart from those coming from the Pacific islands will have to self- isolate. However, the midnight deadline was today extended so people have until 1am tomorrow to enter New Zealand before the self-isolation rule kicks in.

The announcement came after the sixth case of Covid-19 coronavirus in New Zealand was confirmed by the Waitematā District Health Board yesterday.

An infectious disease expert believes it will be months yet before the Covid-19 pandemic is contained.