By Ellen Curnow for The Westport News

A Karamea woman who has spent 10 months shuttling between West Coast District Health Board (DHB) doctors was yesterday diagnosed with terminal lung cancer. 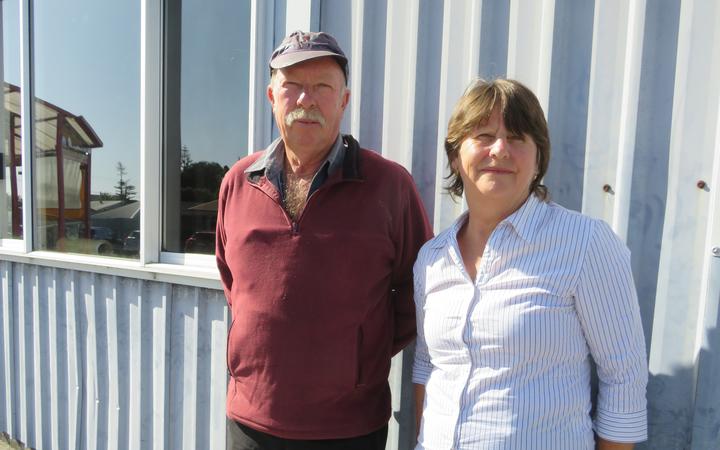 Nijole Vickerman and her husband Kent. Nijole has been diagnosed with lung cancer after dealing with a chronic cough for 10 months. Photo: Ellen Curnow / The Westport News

Nijole Vickerman's chronic cough had been treated as reflux, hay fever and an infection.

A doctor who broke the news to her yesterday was angry about what had happened and said that if the cancer had been picked up six months ago, she would have made a full recovery, her husband Kent told The Westport News.

Vickerman, 61, first went to a doctor in Karamea with a chronic cough and sinus pain 10 months ago. Since then, she has had 25 medical appointments with a variety of doctors, and as many prescriptions for different medications.

She did not have a chest x-ray until last Friday, Kent said, which detected a shadow on her lung, and she went to Grey Base Hospital for an emergency scan yesterday.

Within an hour of the couple returning to Karamea, a doctor visited their home and told them Nijole had terminal lung cancer.

"It rips the guts out of you," Kent said. "We came back expecting a call about an infection or something like that and then tap, tap, tap on the door and there's [the doctor] standing there saying 'you won't want to see me'."

The doctor said Nijole would need to start chemotherapy in Christchurch next week.

"They've told us it's going to be a very, very hard road," Kent said.

His priority was to care for his wife, but he also wanted accountability for the medical professionals who had refused to take his wife's condition seriously until it was too late.

He intended to make a formal complaint to the Ministry of Health and insist it hold individuals accountable. He said the doctor who relayed the diagnosis had promised to support their complaint.

Lung cancer was recorded in her medical history - her father died from it within six months of receiving a diagnosis - but it was not considered as a possible cause of her illness.

Nijole is a non-smoker, and Kent believed her long wait for diagnostic testing was about cutting costs.

His wife had seen doctors in Karamea, Westport and Greymouth and was given Gaviscon, hay fever medication, reflux pills, nasal sprays and antibiotics over the 10-month period. Her health continued to worsen.

After so many attempts at "treating the symptoms and not finding the cause", he demanded his wife have an x-ray.

"When it comes down to it, the x-ray that identified it, that I insisted on getting, cost [the DHB] $110. So that's basically what her life's worth."

He said he and his wife were nearing retirement. "We had a lot of plans, a lot of things we were going to do and now we don't know where the hell we're going."

He said a wide range of people were affected by the diagnosis, including their children and grandchildren in Nelson and Adelaide. The couple was considering moving back to Nelson.

She may have up to 10 years to live - they will know more after treatment in Christchurch next week.

"She doesn't want to die, and she shouldn't have to, but she's going to," Kent said.

DHB general manager Philip Wheble told The Westport News: "We do not comment on individual patient care, however we will contact this family to discuss their concerns."