An environmental group is delighted it can press ahead and challenge a council's decision not to sign up to a national climate change declaration in the High Court. 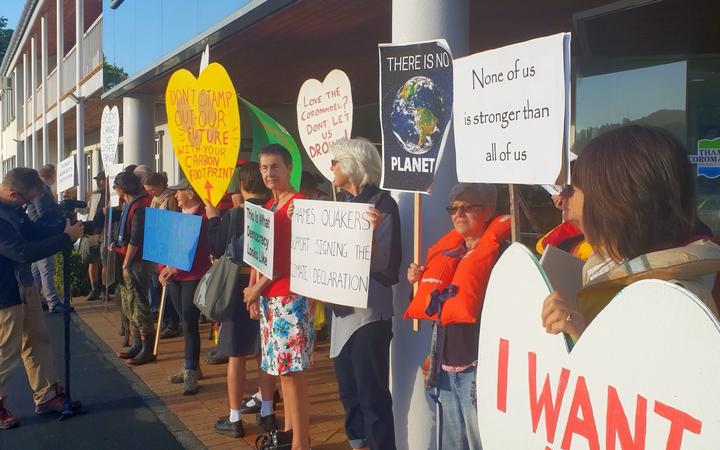 Last year, the Thames-Coromandel District Council voted 6-3 against signing up to the Local Government Leaders' Climate Change Declaration - an aspirational document recognising councils have a part to play in mitigating climate change.

At the time, Thames-Coromandel District Mayor Sandra Goudie told RNZ the declaration was politically driven and she personally did not support signing it.

She has also said her council was proactive in ensuring the community was protected and resilient in vulnerable coastal areas.

Before the decision went to the councillors' vote, Goudie provided her own report highlighting her position and concerns about signing on to the declaration.

She expressed concerns the declaration could be binding and did not know what it would end up costing ratepayers.

The Hauraki Coromandel Climate Action group was formed soon after the vote was cast and, in June, filed for a judicial review of the decision seeking to have it declared unlawful.

The group said the district would be significantly affected by climate change but the council had no climate change mitigation policy, that councillors only considered materials from the mayor herself which proposed the declaration not be signed, and that the mayor had failed to understand the scientific consensus on the predicted effects of climate change.

In response, the council filed an application to strike out the judicial review and applied for $25,000 to be awarded in costs.

In the High Court at Auckland this week, Judge Gault dismissed the council's applications, allowing the review to proceed to a substantive hearing.

Hauraki Coromandel Climate Action spokesperson Denis Tegg said he was delighted the group could challenge the council in court, and hoped if they were successful, it would compel the council to show leadership in the community.

"Signing the declaration is being described as symbolic but it's still important. But beyond that, actually taking action is what we really want to see," Tegg said.

He said that it was a relief to see that costs were dismissed.

"The court has confirmed that we are a public interest group and we don't have any personal pecuniary interest in this matter. Frankly, if there had been a substantial award like the council was seeking, we probably would not have been able to proceed."

Tegg said it was a matter of concern that during the preliminary hearing, the council disclosed to the court an exchange of emails between the mayor and the chief executive of Local Government New Zealand, but those were not provided to the group in an earlier official information request.

The email from LGNZ to the mayor "unequivocally stated that the Declaration was not binding on councils", Tegg said.

"This totally contradicted the mayor's position in her report to TCDC that it was binding," he said, adding that the councillors confirmed to the group that the email was not revealed to them before the April 2019 council meeting where the decision was made not to sign the Declaration.

Tegg said the group was seeking a judicial review because it could not stand for "poor decision making" and he hoped that, all going well for them, it could set a precedent for other decision-making bodies and councils around the country.

Local Coromandel MP, Scott Simpson, who is also the National Party's spokesperson for the environment and climate change, said a decision in the group's favour could "spark a wave of litigation" against councils that had decided not to declare a climate emergency.

"Councillors should be focused on their core activities and a judicial review process just adds cost and time to their work and I'm not sure that it achieves an awful lot," he said.

Simpson said it was ultimately up to the individual councils whether they sign on to a declaration such as this.

"There's no clarity on what would be achieved by declaring a climate emergency, what that would mean in practice, what its legal standing would be or what it would mean if it was adopted."

Thames-Coromandel District Mayor Sandra Goudie declined to comment until the councillors met and discussed the decision.