A Southland man who stole two police-issued pistols and a patrol car, triggering a manhunt, has been sentenced to more than three years in prison. 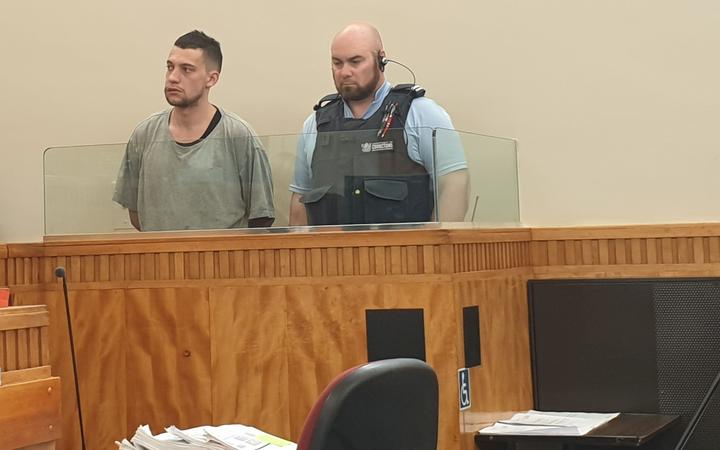 Hori Gemmell spent more than 30 hours on the run before being captured by police. Photo: RNZ / Tim Brown

Hori Gemmell was arrested in Te Tipua, near Gore in last August.

Hori Gemmell was already on the police's radar for breaching his release conditions when he drove past a patrol car close to midnight on 14 August.

He evaded attempts to pull him over, mounting the curb before putting it in reverse and ramming the patrol car.

Gemmell then fled on foot, before doubling back and jumping into the police car, locking the doors behind him.

"When you refused to get out of the police car, one of the officers smashed the window while the other attempted unsuccessfully to taser you. You drove away at speed in the police car, with the lights flashing. The officers had to step back to avoid being hit," the judge said.

Another police officer angled their patrol car in front to try and stop him.

"You accelerated aggressively at that police car, ramming it to the driver's door side and shunting the vehicle. The officer accelerated away, fearing that he would be hit again."

Gemmell drove off in the patrol car, before unlocking the vehicle's gun safe, taking two police-issued Glock pistols and fleeing on foot.

They were each loaded with 17 rounds of ammunition.

More than 50 police officers joined the manhunt, that ended with his arrest and the recovery of one pistol about 36 hours later.

The other pistol and seven rounds of ammunition remained at large for months.

Judge Farnan said Gemmell offered an explanation for his actions.

"You stated you did not appreciate the way the police had spoken to you when you were stopped so you decided to run and when you returned to your own vehicle to leave, you took the police car instead as your vehicle required a jump start to start it."

Judge Farnan said her sentencing took into account Gemmell's mental health history, his life experiences - which included significant grief when his friend died in a car crash, his prior convictions, his two children and his guilty plea.

"You also had prior convictions for violence. You escaped lawful custody in 2016 and you previously assaulted the police in 2016. You have a number of convictions for breaching court orders as well as a number of dishonesty convictions including a significant history for burglary offending. You are aged 24."

The final sentence was for three years and one month imprisonment.

The judge said Gemmell would need to pay $2000 dollars in reparation as the patrol car was extensively damaged.

He will also be disqualified from driving for more than two years once he is out of prison.

Ahead of the intial sentencing date in January, Acting Superintendent Southern District Commander Darryl Sweeney said policing was unpredictable and could involve a great deal of risk.

"I am fully satisfied the officers involved in this serious incident were attempting to do the right thing in pursuit of an offender at night in an unpredictable and dangerous situation," Sweeney said.

Police undertook a review and have since introduced changes to prevent a similar incident from occurring.

"Southern District staff are mandated to carry keys on their person, with a clip-on system now in place which has also been rolled out nationally," he said.

"We have also reinforced our requirement that all systems and vehicles used for field operations also regularly checked and audited."