The opening of two long-anticipated bridges north of Wellington has caused major delays for a stretch of State Highway 1 already plagued by traffic snarl-ups. 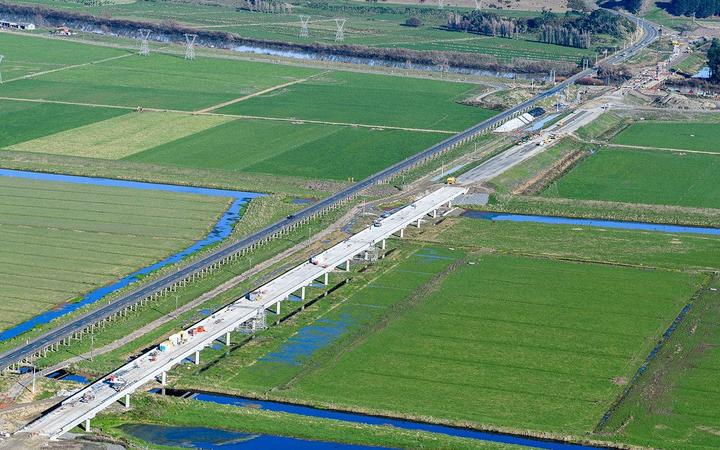 One of the bridges being constructed in August last year. Photo: NZTA/Mark Coote

Locals are critical of the way the $70 million project between Levin and Foxton, which replaces ageing infrastructure, has been rolled out.

It was always a white-knuckle section of the highway - 600m of narrow bridge south of Foxton in a 100km/h zone.

Construction of the new Whirokino Trestle and Manawatū River Bridge - which are wider and sport a median safety barrier - has been underway for nearly three years.

But anticipation turned to frustration after the new structures opened on Thursday causing long delays.

Simon Rowe, from local poultry producer Turk's, said the queues stretched more than 2km on Thursday and even further on Friday.

He said people were stuck in traffic for up to an hour-and-a-half for what should be a 20-minute trip between Levin and Foxton.

Sara-Jane Sowden, from the Bulls information centre, said the delays had knock-on effects for travellers outside the district.

"It holds up other ... connecting buses and the poor guys have this time that they can never catch up on through the day."

These delays come on top of hold-ups caused by other large roading developments in the region, including the massive Transmission Gully project.

Sowden said she now told travellers to allow an extra hour-and-a-half to get from Bulls to Wellington.

"When we tell people that are travelling down connecting with the ferry we say ... 'you can't rely on getting there in two-and-a-half hours. You're going to have to allow ... four hours these days'."

Rowe said communication from the contractor had been dire, with signs telling people to expect delays after the bridges opened not placed far enough from the site to allow people to take a detour to avoid the area.

Horowhenua Mayor Bernie Wanden said the Transport Agency underestimated how much switching to the new bridges - and the traffic management needed to do the finishing touches - would affect travel times.

"There needs to be some coordination between the contractors and the NZTA to make sure that a lot of those delays are not too major."

Transport Agency regional transport systems manager Ross I'Anson said the stop/go traffic management was always going to be needed while the "tie-in" work to connect the bridges to the existing State Highway was done.

But he said the delays were unacceptable and communication could have been better.

"I believe what happened the other day was traffic built up much quicker than we expected."

I'Anson said they were now detouring southbound traffic through Shannon when necessary, which would reduce delay times.

He said this lot of tie-in work would take about five weeks to complete - with the additional couple of weeks of work needed to finish the job unlikely to cause the same types of delays.

The Transport Agency said the stop/go traffic management would typically operate between 7am and 6pm while the construction works were completed, with both lanes open outside peak hour.

It said the southbound detour would operate if delays get up to 20 minutes long.