Masterton Town Hall should be updated not bulldozed, George Groombridge says, ahead of an extraordinary council meeting. 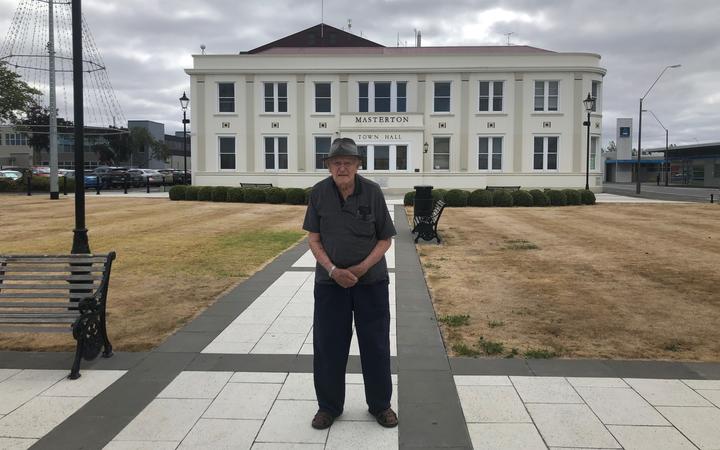 The hall's destiny has been a longstanding point of debate, after the closure of most of its rooms in 2016, following the 2014 Eketahuna earthquake.

The Town Hall and municipal buildings were built in 1915, damaged in 1942 and finally repaired in 1954 with the current facade.

The most recent public consultation process on the matter ended this month with more than 1300 people replying to a Masterton District Council survey.

Groombridge, 92, a former president of New Zealand First, said Masterton needed a civic complex matching those of its neighbouring districts.

He said he thought the existing building would suits those needs.

"Martinborough has a restored town hall, as has Greytown. Carterton has an event centre," he said.

"Masterton has nothing because they can't make up their minds about restoring the existing building, which is a fine, structurally sound building.

"The ceiling is structurally wonderful. It needs a little bit of maintenance, but that is all."

The recent survey continued a trend in favour of a new building.

A slim majority [51 percent] of people said they were willing to pay an extra $4000 in rates over 20 years for a "multipurpose facility".

In late 2017, 65 percent of the 220 respondents favoured a new build. A year later, 59 percent of people said they supported building fresh at a cost of about $15.5 million.

Groombridge is a longstanding town resident and a Queen's Service Medal recipient for his work with Prisoners Aid.

He said he thought knocking the building down was "ridiculous".

"Now we're going to have another session of mucking around ... so far, three times, we've fixed that building.

"We need to say now that this idea of pulling it down is ridiculous ... it's a well-known building, it's part of our town ... the maintenance of the building needs a little bit of attention ... but what iconic building in the town needs it more than this one?"

Councillors and officials meet at 12pm tomorrow to discuss that matter, and the issue of resource consents for Henley Lake.

The lake, built in the 1950s, takes water from the nearby Ruamahanga River under a consent from Greater Wellington Regional Council.

The consent has elapsed and the complexity of repeating the same application has led officials to recommend other options.

These include creating a wetlands area using riparian planting or blocking the take if river levels are low.