Dozens of tourist coaches were allowed to travel the Milford Road today for the first time since a storm closed the road at the start of February. 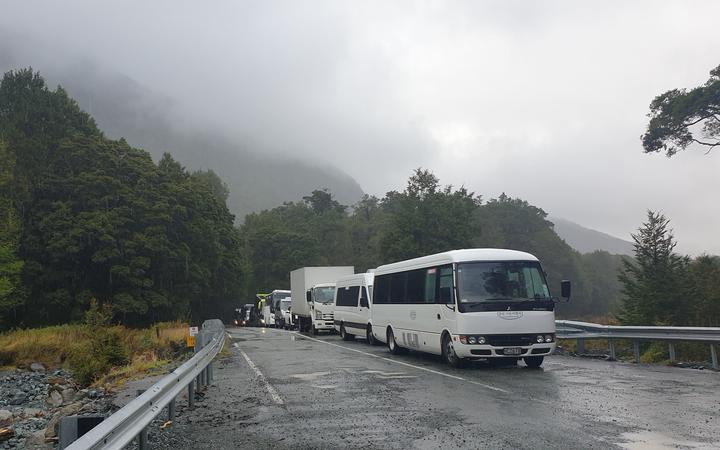 Buses line up as they prepare to drive the Milford Road. Photo: RNZ / Tess Brunton

The popular tourist area was hit by heavy rain and slips, forcing it shut.

While essential vehicles like fuel tankers and food trucks got access last weekend, businesses and tourists alike have been counting the days down until the road could be opened again.

Tourists started arriving for their coach tours before the sun had risen in Te Anau.

Alan Banks and his wife were relieved to finally go to Milford Sound.

"We were here 20 years ago and there was a slip then and they'd closed the road so we did Doubtful Sound that time.

"We were really looking forward to doing Milford Sound this time and then we heard there's been the big storm and the roads had washed out we though 'aw, we're going to be very lucky to get in there'. It just so happens yesterday's was cancelled and we though 'that's our luck again'," Banks said.

Fortunately they managed to snag the last two tickets on a tour this morning.

Southern Discoveries coach driver Reece Hay has been driving Milford Road for the past 25 years, but he said he has never seen the road like this before.

"One area in particular ... you're right beside the river where you'd never see the river before. It's taken all the trees out, everything like that. There's wash outs under roads, there's a lot of gravel sections where they're repairing the roads," Hay said.

"It's a different road."

The start of the convoy is about an hour's drive out of Te Anau, but the closer to Milford Sound it got, the more it started to rain.

A front moved through in the morning, but it was followed by heavy rain which threatened to delay the first convoy.

But after weeks of hard roadworks and long hours, Milford Road Alliance manager Kevin Thompson watched 40 coaches snake through the forest towards Milford Sound on time.

"It's good news and I'm really pleased for the people on board. They're on their way to Milford and that's number one." 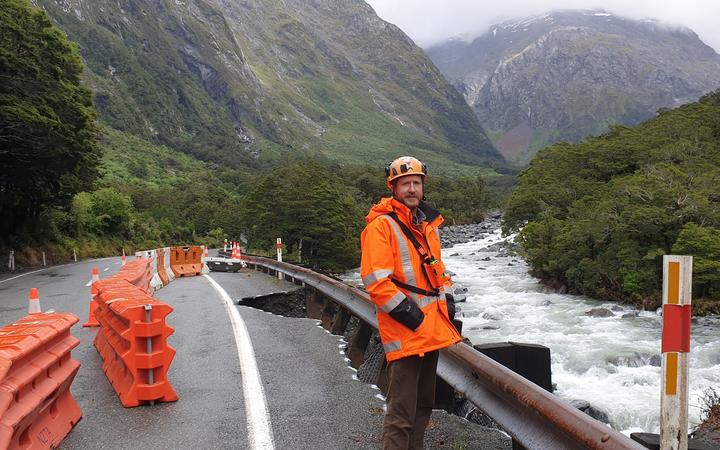 Broken trees stick out of landslips, and rubble has been pushed to the roadside, but Thompson said most of the big issues were hidden.

Standing on the edge of the road, he checked a damaged wall of gabion baskets - they're rock filled mesh rectangles that create a barrier between the road and river.

The river swept over them, creating a washing machine-like effect that ate through material and caused the wall to fail.

"The 'what you can't see' is our next big challenge. It is those things that are down away from the road or under the road - bridges, culverts, walls," he said.

Those things are significant pieces of work to repair or replace and they affect travel so it's a balancing act of trying to do those works and retain access, and that burns up time."

But now at least tourists can get in and out of the area - the bus convoys are expected to run again tomorrow.