A woman who stabbed and killed her abusive partner in their South Auckland home has been found not guilty of his murder but guilty of manslaughter. 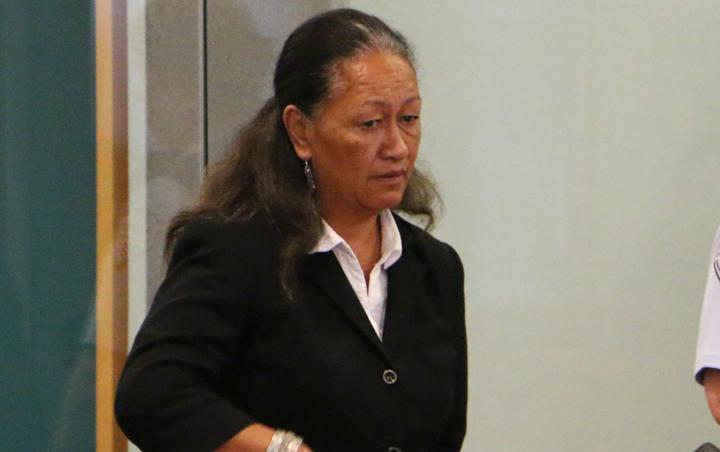 The jury of eight women and four men unanimously found Karen Anne Ruddelle not guilty on the murder charge but returned a majority verdict of 11-1 of guilty for manslaughter.

Ruddelle claimed she was acting in self-defence, due to the years of domestic violence she had suffered at Joseph Ngapera's hand.

The Crown argued she acted deliberately when she stabbed him twice in the chest with a kitchen knife.

The jury returned their verdict at 4.45pm, having deliberated for about 12 hours.

The couple had been drinking and socialising at a local bar before a family member dropped them at their home on Thompson Terrace, Manurewa, at about 3am on 14 November 2018.

Despite previously having a protection order against him, Ngapera was living with Ruddelle, her 14-year-old son and her adult son, Poutou Cameron, at the time.

The court was read notes taken by a police officer who'd spoken to the younger boy.

"I woke up. I walked into the kitchen, I saw my mum arguing with Joseph. I think she stabbed him with a kitchen knife. I think she's drunk. She doesn't usually drink," the boy told Constable Wepiha Te Kanawa.

"I think my mum got upset because Joseph was talking about my sibling in a negative way. I wasn't awake when they were fighting. I just woke up from my bed when I heard mum scream.

"I walked into the kitchen. I pushed Joe away because he was arguing with mum, the next thing I know mum had a knife and stabbed Joe."

He died at the scene.

Ngapera was described by various people as a generous, kind and talented.

But the court was told that he would turn violent when he had been drinking.

He once told Ruddelle that he had killed a man in Australia, and that he had beaten a taxi driver to near death over a fare dispute.

This included grabbing her by the neck and strangling her as he pushed her against a wall, as well as numerous threats to kill.

"How many times does someone need to be told that they're going to be killed before you start to believe that that is a very real possibility? Once you've been strangled, held up against the wall with hands around your throat, [you'd] believe that you might die and you'd be pleading for it to stop."

Prosecutor Yelena Yelavich told the jury that being in an abusive relationship was not a defence to murder.

"Karen Ruddelle was drunk and she was angry. She stabbed a partner in the chest twice using a knife with a 19cm blade," she said.

"One of the stab wounds was inflicted with such force that it passed through her partner's rib, penetrating his heart."

Ruddelle didn't display any emotion as the verdict was read out, nor did her family or Ngapera's, who've been present throughout the 10 day trial.