*Warning: This story and related coverage of the trial contain graphic details that may be distressing for some readers

The detective in charge of the Grace Millane case thinks the "rough sex" argument should not be available as a defence in a murder trial. 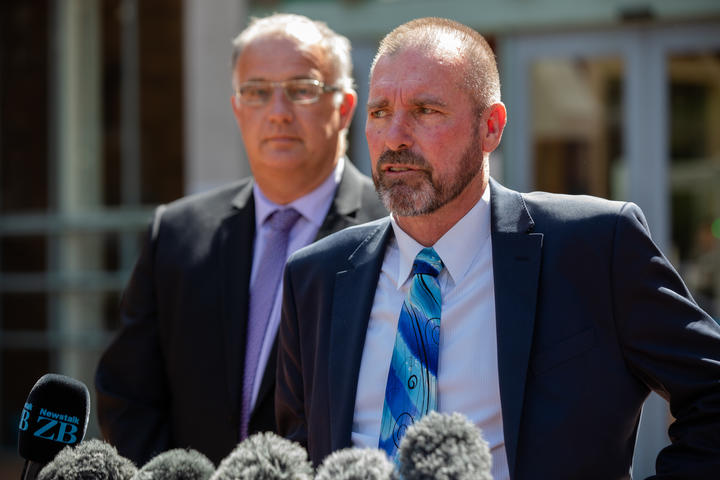 The 28-year-old man was jailed for life with a minimum non-parole period of 17 years in the High Court at Auckland this morning.

Read more on the sentencing of Grace Millane's killer:

Detective Inspector Scott Beard led the investigation into the British backpacker's disappearance and oversaw the homicide investigation from preliminary inquiries to the murder verdict last November.

Speaking to media after this morning's sentencing, he said the sentencing had brought to an end a long and difficult period for the Millane family.

"The impact of losing their daughter on her birthday in a foreign country has been devastating and no matter what this outcome today they will forever have a life sentence.

"They are pleased with the sentence. It does mean they can move on somewhat with their lives but as I've said they'll never get Grace back and they actually have the life sentence."

Millane's mother, brother and sister-in-law spoke at length about the impact her murder had had on their family in court this morning.

Her father, David Millane, had become unwell on returning to their hometown Essex after the trial and did not read a victim impact statement.

Beard has worked closely with the family, and attended Millane's funeral. It was his hope that with support from friends and family they could try move forward with their lives, he said.

"Our thoughts and sympathies remain with Grace's family and friends as they continue to try and make sense of her senseless and needless murder."

Beard thanked the New Zealand police for their work in the investigation and paid tribute to the general public.

"I also want to thank the New Zealand public for the messages of support that they sent throughout this investigation and prosecution for the Millane family. It is absolutely unbelievable."

Beard said while he understood why lawyers would use a 'rough sex gone wrong' defence he didn't believe it was right.

"Strangling someone for five to 10 minutes until they die is not rough sex. If people are going to use that type of defence, all it actually does is repeatedly revictimise the victim and their family.

"In this case the Millanes had to sit through the trial for a number of weeks and their daughter's background, rightly or wrongly, was out in the public."

The man's lawyers Ian Brookie, Ron Mansfield and Claire Farquhar declined to comment as they left the courthouse. His father, who sat through parts of the trial, also declined to answer questions from reporters as he left.