A groundbreaking school that puts a green ethos at the centre of its learning is celebrating its opening in Taranaki today.

Green School New Zealand has a focus on sustainability, but it doesn't come cheap with enrolment and tuition fees costing up to $40,000 for some overseas students.

Built out of sustainable New Zealand pine and heat-treated in the UK they are designed to be thermally neutral and to blend into the environment.

Green School New Zealand chief executive Chris Edwards said the pods were representative of what the school was all about.

"These are curved buildings. They're a unique design and, if it doesn't seem too fanciful, I see them as almost a metaphor actually for the young mind.

"The young mind isn't linear. It isn't boxed. It's not contained. Why do we teach people in square rooms?

"So what we are trying to do here I suppose to an extent is actually mirror what goes on in a young person's mind.

"It's querying, you know, it's a free mind. The lightfall here, the undulations of the scenery, the shadow etc."

Based on Green School Bali, Edwards said the goal of the school - which had about 50 students enrolled - was to prepare young people for the 21st century.

"So we take as our starting point areas like the United Nation's sustainable development goal, permaculture, principles of the sustainability compass and we use those, if you like, as the heart of the curriculum. 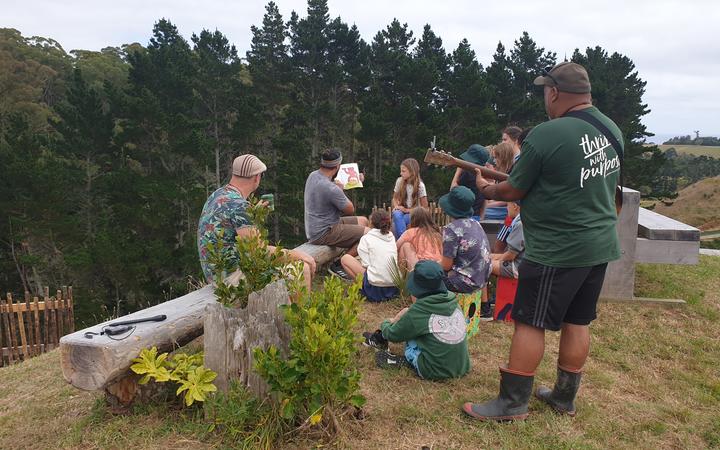 "So instead of starting with your maths, your physics and chemistry they all tuck in under much bigger concepts."

Edwards said subjects such as maths and te reo would be mapped against the New Zealand curriculum and students at the Green School would be able to graduate with NCEA.

He said the school hoped to eventually accommodate 500 students from Year 1 through Year 13 - half of whom would come from overseas.

Roorda said they were won over immediately.

"We came to visit the Green School and we just loved it. The whole family. The kids asked us to stay here.

"We were planning to go back to Brazil in January and go back to our lives and then we said 'no lets stay here and have a new life here in New Zealand."

Roorda said they were attracted by the school's values and its location.

Even the price tag was not off-putting.

"Well the public schools in Brazil they're not good schools so the people that have money they all go to private schools.

"So where we live in Brazil we all pay for school so what we are paying here is the same as there so for us it's not a difference."

The Brazilian couple said the Green School helped get student visas for their daughters and they been granted visas as their guardians.

Another person not regretting moving to New Zealand with his family to enrol at the school was 10-year-old Freddie Chambers.

He transferred from the Hong Kong Academy.

"Well here is a lot more open space and it's like more in the countryside and Hong Kong's more like a city and a town and so right now it's less busy here and it's a really nice place."

The Green School Bali is operated as a not-for-profit, but its New Zealand counterpart expects to eventually run surpluses.

The Ministry of Education requires all private schools here to be registered and have regard to the statement of National Education and Learning Priorities.

But they are not required to teach to the New Zealand Curriculum.

When it is fully registered it will qualify for a per-student subsidy of up to $2300.