All Waihi schools, except Waihi Beach, are closed today after a burst pipe left residents without water temporarily on Wednesday. 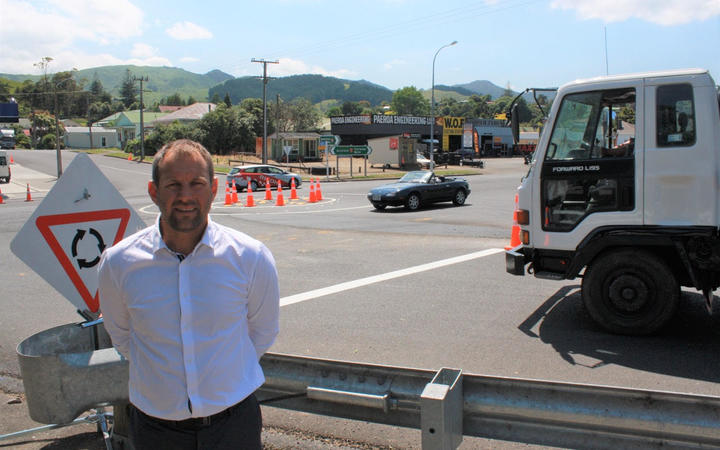 However, the boil water notice for taps in the town has lifted.

A hydraulic shock, also known as a water hammer, was the cause of the pipe burst, according to Hauraki District Mayor Toby Adams.

"We have been supplying residents with fresh bottles of drinking water and there are water stations around where they can come fill up their containers, but it pays to boil that at this stage.

"If you need to flush the toilet, obviously if it's yellow let it mellow and if it's brown give it a flush and let it go down, but just hold off on your showers and washing for just a little bit longer and we should be back on track in not too long."

Adams said the reason for the ban on showering and washing was to allow the town reservoir to fill up again.

"It's slowly filling up, last night it went better than expected... the residents really pulled together and conserved water which is absolutely fantastic.

"We're hoping by mid-afternoon, definitely this evening, people will be able to go back to normal with their showering, toilets and what not, but there will still be a watering ban in place."

Local children will have the day off after the Ministry of Education advised schools there wouldn't be enough fresh water for sanitary purposes.

Adams said locals have taken the water shortage in their stride and doesn't believe the pipe burst was a case of neglect on the council's behalf.

"Everyone in New Zealand is facing ageing infrastructure, it's all getting to a point where it all needs replacing and renewing, it's a huge cost and that burden falls on ratepayers.

"In the past government used to step in and help out with that, but the government's just saying 'no you guys have got to fit the bill'... rates go up all the time and it's just a huge cost and huge burden."

The reservoir that serves the town has been steadily rising since yesterday - when a broken pipe meant the town temporarily ran out of water.

Hauraki District Council said residents gathering water from tankers in the town must continue to boil their supply for at least three minutes.

It said a total watering ban remained in place, but residents were now able to shower and wash their clothes.