The fishing industry is failing to reduce the number of seabirds killed by commercial longline and inshore boats each year. 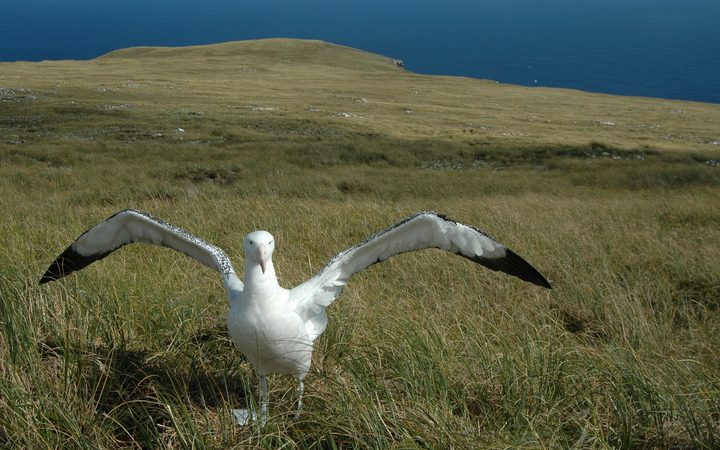 And while the industry says the deaths have halved since reporting began in 2002, actual death numbers have stagnated over the past four years and, in some cases, increased.

New Zealand has about 90 indigenous species of seabirds - more than anywhere else in the world, but every year, hundreds become collateral damage from commercial fishing boats.

Photos taken in 2018 and just released under the Official Information Act show dozens of these birds dead, with fishhooks embedded in their bills.

Endangered species of albatrosses and black petrels are all victims, along with shags, and even a little Fiordland crested penguin. Some are crushed, others dowsed in oil, and many waterlogged or, in some cases, snapped in two.

There were 247 seabirds, including threatened and endangered species, reported by Government observers on fishing boats for the year to June 2019 killed as bycatch.

But only about one in eight fishing vessels have these observers on them. Official estimates - which differ between Government agencies - suggest somewhere between 3300 and 14,400 seabirds die this way each year.

"We're wasting a lot of marine life in the process of catching food.

"We need to understand that this is an accident that happens with such regularity that you can do computer models to estimate the numbers. When something is this structured into the way we go fishing, it's no longer an accident."

Department of Conservation scientist Graeme Elliot and his wife, Kath, study Antipodean albatrosses, whose numbers are deemed to be nationally critical. Five of these were recorded killed as bycatch last year.

"The big albatrosses, and I suppose even the petrels and stuff too, the big threats are longline fishers," Mr Elliot said. 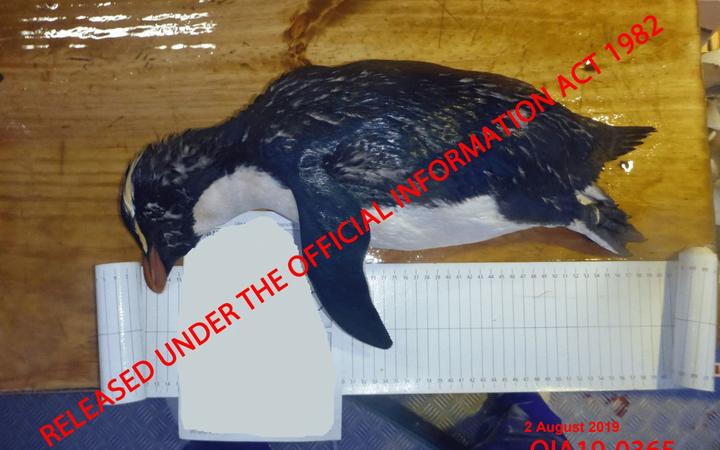 This Fiordland crested penguin, caught between July 2018 and December 2018, was found to be waterlogged. Photo: Supplied/Forest and Bird

Longlines go over the backs of boats and float for a bit before sinking. The risky period is while they're floating.

As the female is the hunter gatherer in these domestic pairings, she's at much greater risk of being wiped out by a hook, which doesn't bode well for reproduction in a species that likes to take it slow.

"We've got higher numbers of males standing around waiting for their females to come back, and the girls are all stuck in fishing lines somewhere else," Elliot said.

Paul Scofield, senior curator at Canterbury Museum, said the effects of bycatch will affect some breeding populations for decades to come.

"Some of the declines we're seeing on the breeding grounds are due to the effect of bycatch 10 or 15 years ago."

It's not illegal to kill a seabird, but it must be reported, and fishers who fail to do this can face a $10,000 fine.

But even so, boats with observers on board are about nine times more likely to report seabird bycatch than ones without.

The Ministry for Primary Industries said almost half of deepwater trawlers now have obeservers on them. But 95 percent of the time, many smaller trawl and longline vessels still have no observers on board.

The industry admits this is a problem. Tim Pankhurst from Seafood New Zealand said: "There is a component of under-reporting by fishers which we, the Department of Conservation and Fisheries Inshore NZ are seeking to address."

"We support a goal of striving for zero fishing-related captures which reflects the reality that captures are inevitable but we should strive to reduce them to the lowest level practicable," he said.

MPI data states the estimated annual number of seabirds captured - which included birds that survive - in deep water trawl fisheries has halved since 2002/03, but for the past three recorded years, it has sat around 1500 birds.

"We are confident that have significantly reduced the number of seabirds captured by deepwater vessels, we acknowledge that there is still work to be done," Clement said.

The National Plan of Action on Seabirds, currently under consideration, aims to minimise the risk to these species.

A summary of a joint submission on the Plan, from Deepwater Group and Seafood NZ, said the groups were prepared to work collaboratively on "species of concern" like black petrels, Antipodean albatrosses and yellow-eyed penguins.

Forest & Bird doesn't accept this approach, and handed a petition to Parliament last week calling for zero bycatch of all animals.

MPI says submissions on the National Plan of Action for Seabirds are currently being analysed.

Once implemented, the plan will be reviewed after five years to assess whether goals have been met and what needs to change.

It was not clear when the final plan would be released.