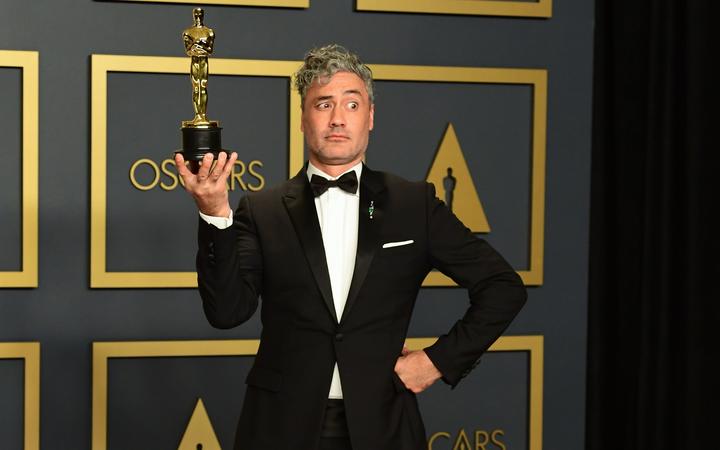 Hopes for Kiwi success at the 92nd Oscars mainly rested with Taika Waititi, with Jojo Rabbit up for a host of awards.

Picking up the prize for adapted screenplay, he said, "I dedicate this to all the indigenous kids in the world who want to do art, and dance, and do stories. We are the original storytellers.

The film, adapted from Belgian-New Zealand author Christine Leunens' novel Caging Skies, tells the story of a brainwashed 10-year-old coming to terms with morality as he grows up in Nazi Germany.

In his speech, Waititi thanked his mother, his wife Chelsea Winstanley, and Leunens.

Winstanley and Carthew Neal - who were producers on Jojo Rabbit - were also nominated alongside Waititi in the Best Picture category, and were the first indigenous producers to be nominated for a Best Picture Academy Award.

The movie had four other nominations: New Zealander Ra Vincent was nominated along with Nora Sopková in the Best Production Design Category where it lost out to Once Upon a Time in Hollywood.

Two more New Zealanders were up for awards, although Waititi's win meant New Plymouth-born Anthony McCarten - the screenwriter behind The Two Popes - missed out.

It was unfortunately also a miss for Matt Aitken, who was nominated in the Visual Effects category for Avengers Endgame.

Parasite became the first film not in the English language to win Best Picture.

"When I was young and studying cinema, there was a saying that I carve deep into my heart which is, 'the most personal, is the most creative.' That was Martin Scorcese," the director said, gesturing towards Scorcese.

"I applaud and support the new direction that this change symbolises."

In the other main awards, Renee Zellweger picked up Best Actress for Judy, and Best Actor went to Joaquin Phoenix for Joker.

Scarlett Johannsen was up for Best Supporting Actress which went to Laura Dern in Marriage Story.

Tom Eagles was nominated for Best Film Editing and lost out to Ford v Ferrari.

Still the usual glamour, but unusually no host

The show was off the mark by 2pm - a lung-busting performance by Janelle Monae who praised all the female directors (the Oscars had courted controversy with an all-male shortlist in the category) was followed by a short and sharp duologue by Steve Martin and Chris Rock.

With the show attempting to keep down to three hours, it miraculously only lasted around three and a half.

Amid the usual high-budget performances, including an international cast of Elsas from Frozen, and a surprise Eminem performance of Lose Yourself from 8-Mile, there was also a good amount of humour from award presenters.

James Corden and Rebel Wilson managed to provide some silliness, as they walked onto the stage dressed up in cat onesies, and took a jab at Cats' visual effects.

In other awards, Brad Pitt took home his first acting award, winning Best Supporting Actor for Once Upon A Time in Hollywood.

ACTOR IN A SUPPORTING ROLE - Brad Pitt (Once Upon a Time... in Hollywood)

CINEMATOGRAPHY - Robert Richardson (Once Upon a Time... in Hollywood)