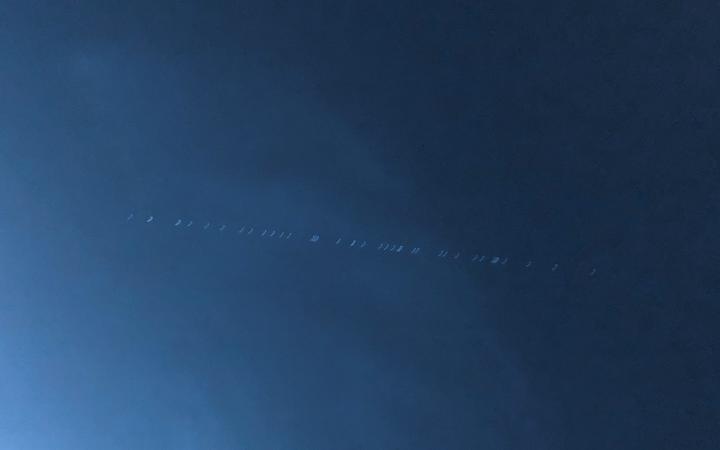 The Starlink satellites as seen from Apiti, in Manawatū, on Saturday night. Photo: Supplied / Alexander Robertson

People reported seeing strange lights in the sky but an Auckland astronomer says the explanation is relatively mundane.

Grant Christie, of the Stardome Observatory, says sunlight was being reflected from hundreds of satellites being launched to deliver broadband internet.

He says the number and brightness of satellites launched by companies such as SpaceX and OneWeb is becoming a problem for some astronomers.

SpaceX has so far launched 240 satellites as part of what it says will be 12,000 orbiting earth.

Leading satellite mega-constellation companies SpaceX and OneWeb have met with astronomers in Europe to discuss the impact their operations could have on observations of the Universe.

There's concern that the size and brightness of the firms' planned fleets could interfere with the work of professional telescopes.

The parties discussed the issues in a private meeting at the Royal Astronomical Society in London, UK.

The talks were described "as positive".

Present for OneWeb was Dr Timothy Maclay, the start-up's director of mission systems engineering; and for SpaceX, the participant was Patricia Cooper, the California company's vice president of satellite government affairs.

OneWeb and SpaceX are in the process of launching big networks of spacecraft to deliver broadband internet to every corner of the globe.

The numbers of platforms involved are unprecedented in the history of spaceflight.

The RAS gathering was intended as an opening move in what is hoped will become a continuing dialogue. Media were excluded to allow the delegates to have a frank discussion, RAS deputy executive director and press officer, Robert Massey, told BBC News. 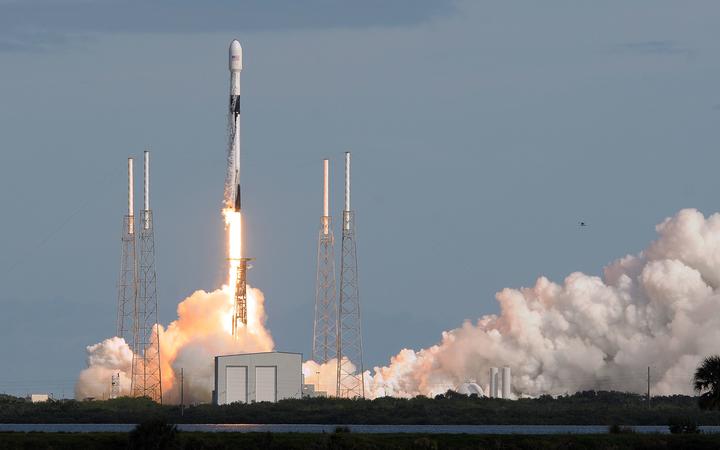 One, from the University of Southampton, has investigated the reflectivity of SpaceX's Starlink satellites and what's driving their brightness in the sky.

The second, from the European Southern Observatory organisation, has attempted to model how much observing time might be lost by the world's major telescope facilities if the mega-constellations' interference is as bad as some fear it could become.

Already, astronomers have talked of passing Starlink satellites producing streaks and "ghosting" in telescope images; and of detectors becoming saturated in the glare from the satellites.

SpaceX has so far launched 240 satellites in what it says will be an initial constellation of 12,000.

OneWeb only has six spacecraft up at the moment but will begin a big roll-out next week. This will see 34 satellites being lofted every month or so until 650 platforms are circling the globe.

SpaceX is already in discussions with the American Astronomical Society. It's the wide-field survey telescopes that could suffer most. These will scan large portions of the sky every night looking for opportunity targets such as passing asteroids and exploded stars, but these searches could become compromised if astronomers also have to account for large numbers of confounding artificial light sources.

Dr Massey told BBC News: "We appreciated the openness of the two companies; we appreciated the fact that they came to see us and to talk to us. We know that they're not the only operators out there and we need to be having discussions with those people as well. But I think we started to understand some of the genuine quantitative impacts on optical and radio telescopes."

The absence of an internationally agreed framework to guide the satellite industry on the brightness of its satellites, giving it some standards to work to, was one of the issues raised at the meeting, Dr Massey added.

He contrasted this with the best-practice measures designed to mitigate space debris.

Operators are urged to pull defunct spacecraft out of orbit within 25 years to reduce the chances of a collision with active platforms.

SpaceX has modified one of its satellites to have a different coating which may help reduce its reflectivity. However, the suspicion is that much of the brightness comes from light bouncing off the long singular solar array incorporated into the Starlink design.

The RAS meeting also included representatives from the UK and European space agencies, and from the Square Kilometre Array.