An Auckland man who failed to take proper care of his sheep has been disqualified from owning sheep and cattle for 10 years. 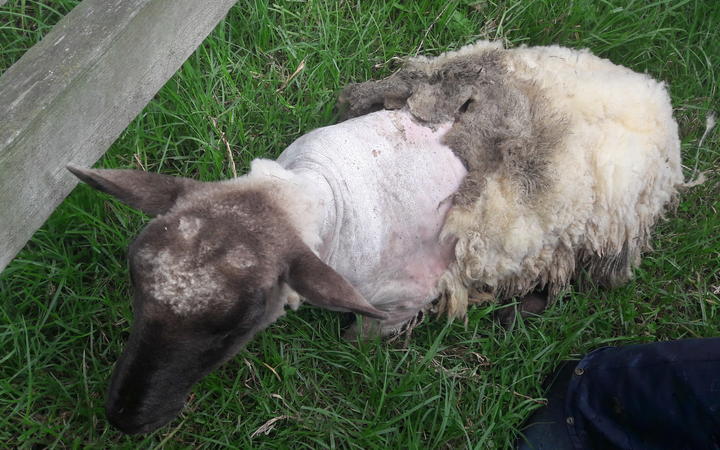 One of the sheep found on Andrew Dyson's property in Clevedon. Photo: Supplied / SPCA

As well as the ban, he was sentenced to 175 hours of community work and ordered to pay $527.88 in reparations.

SPCA inspectors responded to an animal welfare complaint at a property in Clevedon in February 2017.

All sheep had heavy fleece, daggy rear ends, and their water drums were completely empty. One of the sheep was lame and had mobility issues.

Despite assurances the problems would be fixed, a second complaint was made three weeks later about the same sheep.

They were rubbing and scratching up against a fence, trying to get shade with heavy and discoloured coats.

Some of the sheep appeared weak and lethargic, the SPCA said.

The body of a dead sheep was found near a fence line with a powerful stench, covered in flies and maggots.

Dyson's niece said some of the sheep had died recently and she had had arguments with him about the care he was providing his stock, the SPCA said.

Dyson knew he was under SPCA investigation and padlocked gates to try and prevent entry, the SPCA said.

A vet found that all the sheep were affected by flystrike and were maggot infested.

One ewe had a medial toe abscess which was chronic.

Two of the sheep appeared to have been illegally docked and tail docks infected. All of the sheep had wounds consistent with a dog attack.

The vet concluded that the welfare of all the sheep had been compromised causing the pain and suffering.

The sheep were all treated and given pain relief.

SPCA chief executive Andrea Midgen said it was unnecssary to leave animals in such pain and distress.

"Sheep should be shorn as frequently as necessary to mitigate health and welfare concerns. These sheep would have been extremely uncomfortable under their fleece in high summer," she said.

"On top of this, the fact that these sheep were found in the condition they were is horrifying.

"Flystrike can cause pain, distress and extreme suffering through inflammation, infection, reduced appetite and weight loss, and badly affected sheep can die, which is what happened in this devastating case."