The police hunt for an arsonist causing fear along the eastern shore of Lake Taupō continues, but police say it is too early to claim it is a serial arsonist at work. 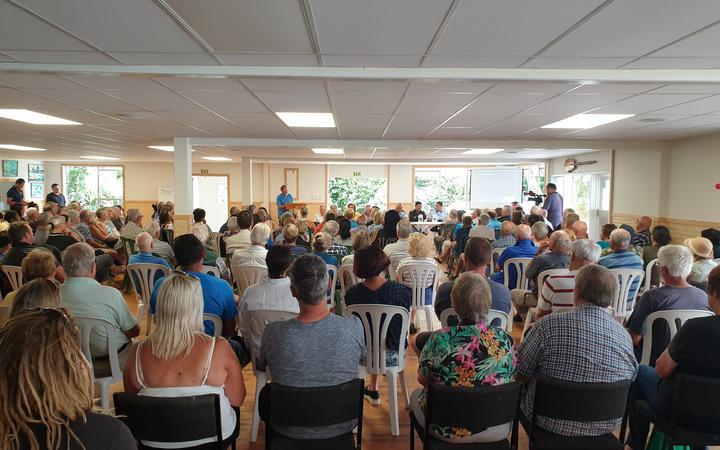 The Lake Taupō arson hui at Waitetoko Marae on Wednesday evening, with about 300 people in attendance. Photo: RNZ / Andrew McRae

On 12 January, five properties at Hatepe, Tauranga, Taupō and Waitetoko were set alight , including one with a family inside.

All managed to escape safely.

But now there has been another suspicious fire lit.

On Sunday, furniture on a deck was set alight at a property in Waitetoko.

About 300 people met on the Waitetoko Marae on Wednesday evening to get an update and a plea for help from police.

Most of the people at the hui were retirees or holiday home owners, all worried about their properties and some very frightened.

''We would like a result, that is for sure,'' one homeowner said.

A couple who lived four doors down from one of the houses burnt to the ground said they were frightened.

They said they left the meeting not really that reassured.

"It's a concern. The gas bottle and barbecue go inside. You have no idea.

'"It is very concerning."

The couple said the threat of another fire did put them off coming up from Palmerston North to their holiday home at Hatepe.

''You can't replace a life, you can replace a house.''

Another resident said it was a bit scary and that he has put in extra security.

Police area commander Warwick Morehu said the meeting was to assure locals all was being done to catch the offender - or offenders - and to give advice on how to keep safe.

"To be honest we are still looking for the perpetrators. We are wanting more information. So far we have had about 17 detectives working on this case. We are happy with the way it is going but actually we still need more information.''

He said now there had been another fire, police were starting to assume the arsonist may be local rather than someone just passing through.

''That does give us concern but also actually does give us something to re-focus on. In terms of a serial arsonist, I would suggest we are not quite at that stage but we are looking for someone who has some serious issues.''

Taupō District Mayor David Trewavas said there is a sense of desperation in the community.

''Huge turnout at the meeting and I think most have come away feeling positive that there is going to be an outcome at some stage but we just need to keep working on it and solve this issue.''

The presence at the hui of Ngati Tuwharetoa Paramount Chief, Sir Tumu Te Heuheu underscored the significance of the meeting and the importance of assuring locals all was being done to catch the arsonist.

Waitetoko Marae Kaumatua Danny Morehu said while it appeared very little progress was being made in the investigation, locals accepted it and trusted the police.

''We all know that it is a long haul. We know the work of policing and what that means in their investigation and we are not here for a quick arrest, we are here to assist them to do their job the best.''

Those at the meeting left the hui not too much more in the know, but they all agreed neighbourhood watch needed to be upgraded, as did cell phone coverage down the eastern side of the lake.

They also took home a strong message from police to report anything vaguely suspicious to them.