A Whakatane resident fears damaged water pipes may be leaching asbestos into her household's drinking water. 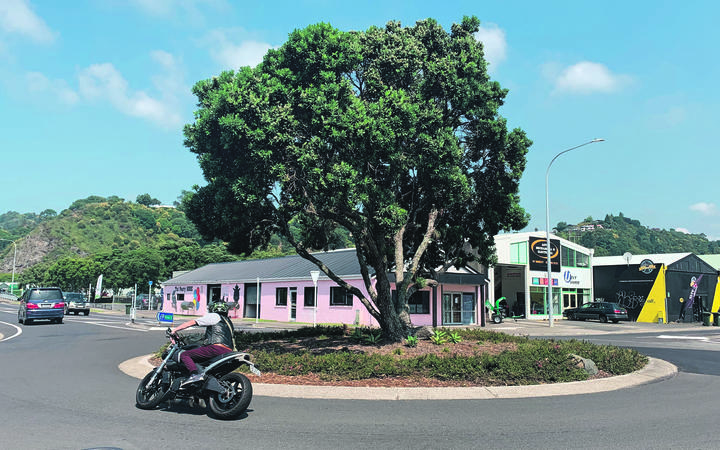 Water pipes have burst near the McAllister and Bracken streets roundabout. Whakatane District Council says the council has minimised the potential for asbestos to enter the water supply system during repairs. Photo: Charlotte Jones / LDR

The McAlister Street resident, who declined to be named, said there had been a lot of "blowouts" on the street recently and she was concerned the pipes, made with asbestos, would contaminate the water and poison residents.

"There was a big blowout outside number 10 earlier this month and there have been a few around the roundabout too," she said.

"It's happening all the time and it's happening in the same area and I just reckon it's going to poison the residents."

The woman said there had been a burst pipe outside her home a year ago and, at the time, contractors informed her the asbestos in the broken pipe would not contaminate her water.

She said she didn't believe what the contractors told her and had since spent nearly $3000 on a water filtration system.

"I don't know that it takes out the asbestos, but we had just changed our filters and now we've had these other blowouts we'll have to spend another $300 and change them again."

Ministry of Health guidelines on asbestos released in 2017 note that the adverse effects of ingesting asbestos have not been clearly documented.

It notes that people can be exposed to asbestos through deteriorating water pipes, but studies have shown few fibres are able to penetrate the gastrointestinal tract.

"There is considerable controversy as to whether ingested asbestos fibres can penetrate and pass through the walls of the gastrointestinal tract in sufficient numbers to cause adverse effects," the ministry states in the report.

"Moreover, in extensive studies in experimental animal species, asbestos has not consistently increased the incidence of tumours of the gastrointestinal tract. There is therefore no consistent evidence that ingested asbestos is hazardous to health."

It concludes that the World Health Organisation does not feel it necessary to establish a health-based guideline for drinking water due to the little evidence that asbestos is harmful to health when ingested with water.

Asbestos fibres in the air can cause asbestosis, lung cancer and mesothelioma.

A Whakatane District Council manager, Tomasz Krawczyk, said the council minimised the potential for asbestos to enter the water supply system by isolating the length of pipe in which the break had occurred, repairing it and then flushing and disinfecting it in accordance with "strict hygiene procedures".

"The McAlister water main is getting close towards the end of its useful life," he said.

"The current plan is for this water main to be replaced within the next three to five years and to modernise the network in the vicinity. Council is constantly analysing the state of its assets and the need for their replacement versus the cost of repairs."

The recent failure near the Bracken and McAlister Streets roundabout was partly due to the pipe's age, but also due to "complicated interconnections between different types of pipes".

Mr Krawczyk said there was a similar failure on the same pipe a year ago, which was not uncommon for a pipe of its age and the council would continue to monitor the situation.

The council typically attends two cases of leaks across the water supply network daily, which it does not consider to be excessive.