Auckland marks its anniversary today with its annual regatta on the Waitematā Harbour and Hauraki Gulf. 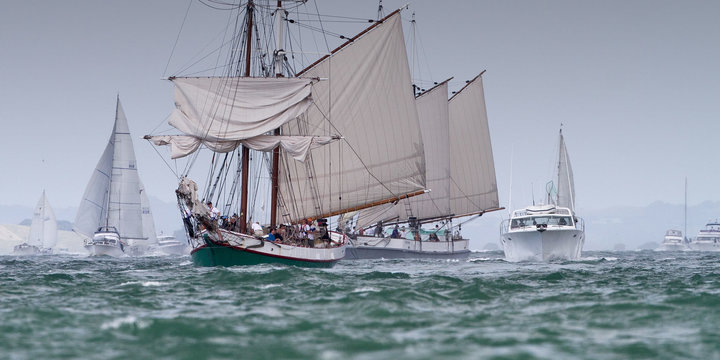 Boats on the harbour in a previous the Auckland Anniversay regatta. Photo: Supplied

The regatta can be traced back 180 years, to 1840, when a few boats in the harbour set sail and competed against each other.

Keelers, launches, tugboats, dinghys, dragon boats and waka ama will be out on the water at some stage today, competing in races, or just having fun.

While hundreds of boats of every description will be on the water, organisers say numbers have been declining over the last few years.

Regatta chairman David Stone said demands on people were making it harder and harder to keep up the numbers.

''The problem we have with something like the regatta is that everyone is just increasingly time poor and it is the last long weekend, or second to last long weekend of summer. The competitive boats have been up in the Bay of Islands, for Bay of Islands race week and it is just harder to get crew organised and boats prepared for this competition [anniversary regatta].''

But he said this did not mean interest in sailing, particularly from young people, was waning.

''I think what you have got to take from what is happening this time is the size of the dinghy fleet [taking part] and the number of youth participation and that's where the sailors of tomorrow and cutting their teeth and gaining their skills.''

Bob Still, skipper of the 42-foot yacht, Rawene, which was built in 1908, will be taking part in the anniversary regatta and sailing back from Mahurangi.

''It's part of our heritage in Auckland and this boat has been doing it since 1908, so that's 110 of those years. So it is kind of you know, Auckland's special day and especially for these boats, they are part of that history.''

He agrees fewer people have the time to get out on the water in boats these days.

''The people that are still doing it are just as keen and like in the classic boats area those kind of numbers aren't really dwindling and that's still quite well supported. It's kind of more the other stuff that the numbers are down in, the more modern things, you know.''

Bruce Tantrum first sailed in the regatta in 1957.

He is back again out on the water for the regatta with his boat Paramour, which he built himself.

Tantrum said the regatta was one of the best in the world.

''Our sailing her, the boats and the people would stand up against any other, comparative countries or locations. We are blessed with what we have here, it's wonderful and our job is to hand it over to our next generations to enjoy.''

One event to watch is tug boat racing, when vessels ranging from the port's own modern tugs and various older versions, have a bit of fun.

''You can see them assembling and they normally do a little bit of a play around and a bit of a knuckle up and push each other around and have a clown around and then they get in line and the gun goes off at ten [o'clock], said race organsier Baden Pascoe.

Pascoe hopes the culture of Auckland as a maritime city is retained.

Yachtie Bruce Trantrum said whatever the numbers of boats taking part, the regatta would be spectacular.

''There is never a great big bunch of [boats] in one spot, although the racing will probably on Anniversary Day include some up and down the harbour, and it will certainly be visible for the Auckland public."

The first of the boats will be out competing from 9am.