About 200 anti-5G protesters turned out in Christchurch this afternoon, calling for more public consultation and a thorough examination before the new technology is used. 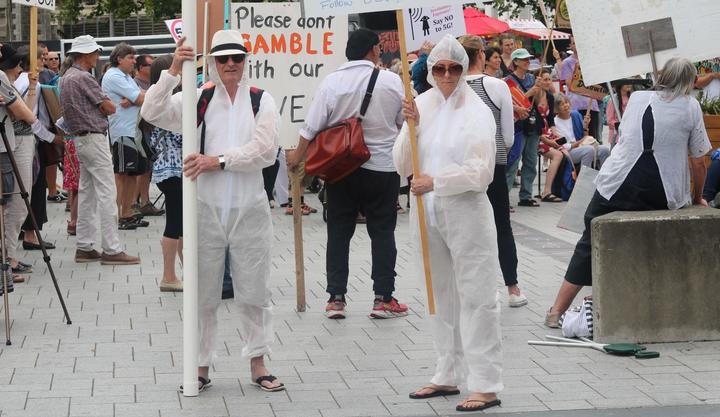 They swarmed central Christchurch with placards, hazmat suits and songs about radiation. There was a smaller protest in Auckland.

The group are frustrated cell towers for the new technology are being built without public consultation, though scientists and cyber-security experts say it is safe.

Limited-capacity 5G mobile coverage is already available in parts of Auckland, Queenstown and Christchurch and it's being rolled out quickly elsewhere, after a Ministry of Health advisory committee found it didn't warrant changes to the health exposure standards for radiation, in 2018.

It's got the go-ahead from the government after Government Communications Security Bureau [GCSB] rejected Spark's bid to use technology from the Chinese firm Huawei.

But the protesters insist 5G causes cancer, harms the environment and could be used for surveillance.

Derrek Gilbert was among the protesters in Cathedral Square and said he joined the rally because he wanted to protect the well-being of his grandchildren.

"We need to stop and think. Is this a fundamentally flawed way of pushing forward without thorough consensus and thorough examination?" he said.

"My focus is mainly about the health and about the privacy and the right to have some sort of life where you're not interfered with." 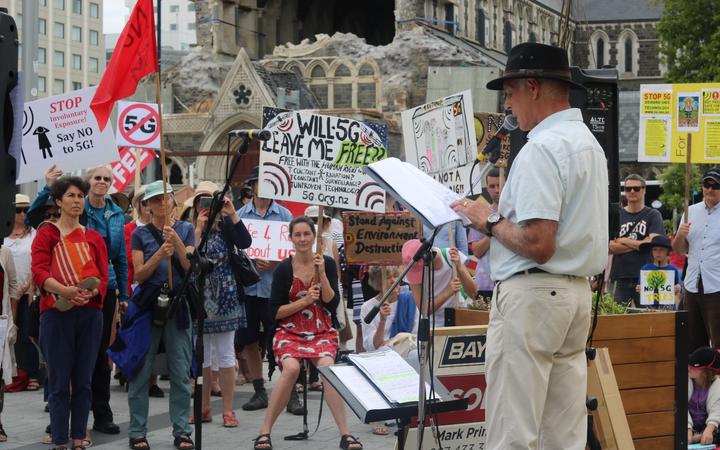 Protester Sheree Bajon described the rollout of 5G as scary.

"It's an invasion of my freedom and choices. I want to be healthy. I'm fighting for health," she said.

Another protester, Deb, who didn't want her last name used, said the concerns needed to be addressed at the highest level of government.

"I'm pretty keen to hear from Jacinda Ardern what her thoughts are in relation to 5G and the protection of our children in this country."

A statement on the Ministry of Health's website said a vast amount of research had been published on the possible health effects of radio frequency fields, and health and scientific bodies around the world had reviewed that research thoroughly.

It said exposure to high-intensity radio signals could cause harmful effects, which was why limits were imposed on cellsites in New Zealand, 50 times below those at which harm might occur.

However, it said its Interagency Committee on the Health Effects of Non-Ionising Fields will continue to monitor new research on 5G as it becomes available.