Many people have been spending their summer house-hunting, with rental enquiries on TradeMe up 17 percent in December compared with the same time last year. 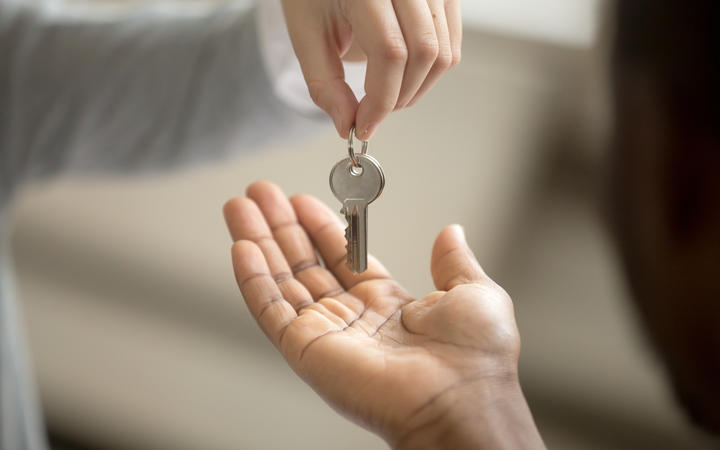 In the Wellington, median weekly rents hit $600 for the first time. Photo: 123RF

According to TradeMe's latest rental price index, the Wellington region is the most expensive place to rent, at a record breaking $580 a week.

In the city, median weekly rents hit $600 for the first time.

Second-year Victoria University student Zayde Parsot and four mates have been looking for a flat together for the last three months.

Coming from halls of residence last year, they are unable to supply references from previous landlords, which was a major disadvantage, he said.

"It's come to the point in the market where we just need a place to live and everyone starts coughing up. One of my mates is paying $280 [for a room], it's just ridiculous. $280 is criminal."

Parsot said they were also contending with a gender bias.

"Landlords and property managers don't want to rent to a group of guys.

"My girlfriend can get a viewing appointment while me and my [male] friends don't even get a look in."

TradeMe Property head Aaron Clancy said the most popular rental property in New Zealand last month was a two-bedroom house in the inner-city suburb of Mount Victoria going for $550 a week.

"That had 95 enquiries in the first two days. The reality of that is that only one of those tenants is going to be successful, and we've still got 94 other people who are going to have to look elsewhere. That really shows that's there's massive demand for what's on the market at the moment."

Migration and high house sale prices were driving shortages and pushing up rents.

"So if you go back a few years, you could save for a deposit quicker and go into your first home. Now that's a lot harder, so tenants sit longer, as a result there are fewer properties on the market, and tenants take longer to find one."

Outlying areas were seeing huge increases in enquiries, with demand for rentals in Upper Hutt and Porirua up 21 percent and South Wairarapa rising a massive 80 percent.

"These rents aren't going up because the houses are becoming better quality. It's completely connected to the demand, and landlords taking advantage of that to put their rents up."

Upcoming rental law changes - including limiting rent increases to once a year, banning rental bidding and ending no-cause evictions - would give tenants more security, he said.

However, the dominance of property management companies and one-year fixed-term tenancies was creating more pressure in the main centres.

"Those companies are deliberately organising their rent books to push up rents each year when those tenancies expire. Everyone is looking at the same time in the same market."

Oxygen Rentals general manager Christian Casbolt said it was "a hectic time of year" for agencies, with lots of change among fixed-term tenancies.

However, that was unavoidable in a student town, he said.

"Rents can only go so high, and we see landlords who appreciate that they need to find some common ground with what people can actually afford.

"There's a number of owners who are (call it something else perhaps) having a social conscience around rent increases.

"Not everyone is looking to increase rents to what the higher quartiles of the market are saying."

Casbolt said house-hunters could help themselves by being clear about what they want, how much they can afford, getting their references in order and keeping appointments, which would endear them to busy property management companies and landlords.

One tenant, who wished to remain anonymous, said however that even after finding a place to live, he and his wife still felt very vulnerable.

After moving to Wellington for work a couple of years ago, they spent nine long weeks going to open homes, often with queues of other people ahead of them.

"There were families with kids applying for one or two bedroom flats."

Their flat did not proper heating, ventilation or insulation - but they were too nervous to raise these things with the landlady because they cannot afford a rent increase.

"At the moment, landlords can charge what they like and no-one is ensuring they follow the requirements.

"You can go to the Tenancy Tribunal, but by then you have usually moved out.

"I am a confident person but having the prospect of not having a roof over our heads makes it difficult to even raise the issue."