Tonnes of ancient volcanic rock are being transformed into works of fine art on New Plymouth's coastal walkway. 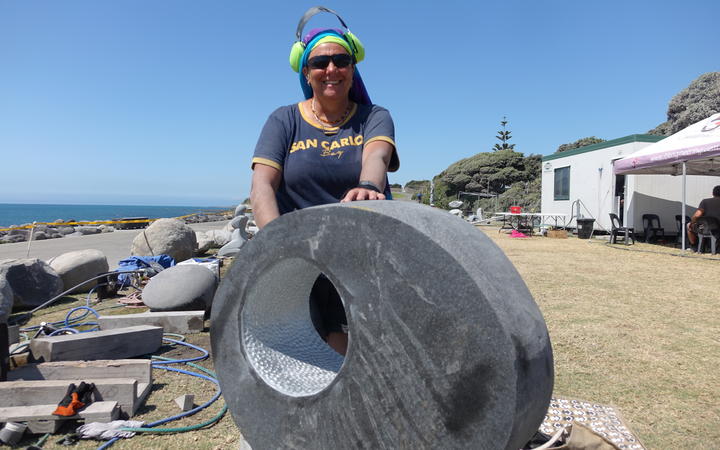 Twenty-seven artists - including three from overseas - have set up camp on the popular walkway as part of the biennial Te Kupenga International Stone Sculpture Symposium.

Established 18 years ago, Te Kupenga aims to foster Taranaki's reputation as a centre of excellence for the stone sculpture art form.

The event starts with the artists - each of whom had to apply to take part - taking a few minutes to choose two andesite boulders to work on, each weighing about a tonne.

Co-organiser Michelle Parker said the quality of Taranaki andesite lay at the heart of Te Kupenga.

"It's originally from the mountain and it's made its way over thousands of years down to the awa, the rivers.

"Some carvers let the stone dictate to them. They talk to the stone and the stone talks back to them. Other carvers like me are a bit more methodical and geometric. Everything's measured and blocked out initially and the form starts to come from there."

Parker said her own piece was architectural in nature.

"I've used the basis of a spiral for my idea where I've cored through the middle. I have found that the stone is very soft so I've had to adapt my plan a couple of times which is why I've got two spirals running through it and decided I'll still put the holes through to make use of the light." 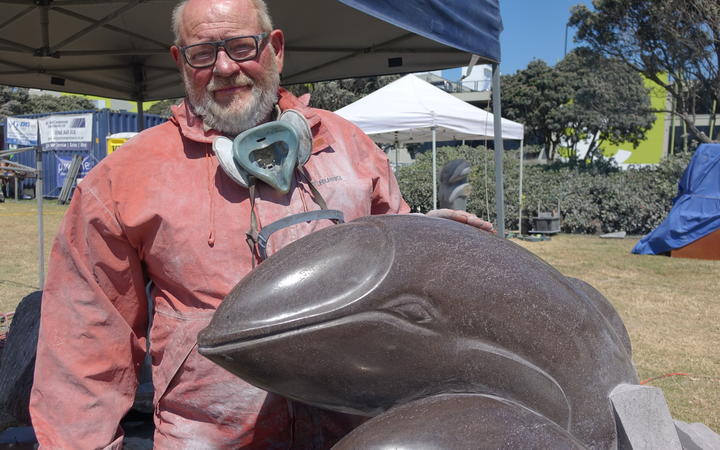 Australian Silvio Apponyi, who was one of 60 applicants from overseas, took his inspiration from nature.

"I found a piece of brownish chocolate-coloured andesite when I was given free reign for 10 minutes to choose a rock and that's made the two Maui's dolphins and then I found another greenish coloured rock which is the one that I'm working on now. And I'm carving a seal chasing a kahawai. The kahawai's got about that much chance."

Mr Apponyi said he was aware of the Maui's dolphin's plight and could visualise its form. 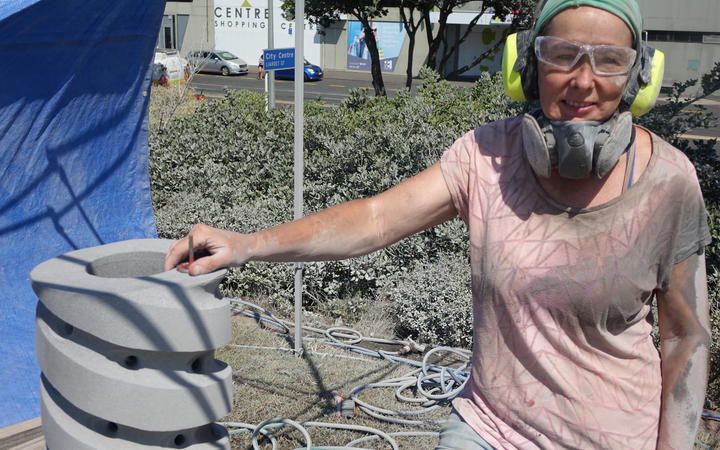 "I've got a filing cabinet of I don't know how many creatures in my head and whatever I'm going to do I just pull out that filing cabinet draw and take out what they look like and then stitch it together and make whatever suits that particular rock."

Thames artist Jocelyn Pratt had been attending the symposium since it began.

She liked to find beauty in the mundane.

"This is actually a stylised piece of a shin bone. You know when you feed the dog a little shin bone as a treat and there's these little slices of the shin bone, which are totally different shapes and really exciting and I think they are really beautiful.

"So this is a stylised version of that and because it is such beautiful black stone I actually wanted a contrast so I spent about seven hours with a little ball making all this texture and then I've painted it silver for a bit of bling."

Ms Pratt said one of the best things about the Te Kupenga symposium was being able to share ideas.

"So a symposium is actually for me working with and learning from other people so enjoying and I guess being inspired by other people's creativity and just also the energy and buzz of so many sculptors working together in the same space."

Opunake artist Chauncy Flay had created one of the more unusual pieces.

"My sculpture is a 2.5m stack of 15 geometrically cut stones which all come from one deconstructed stone."

Mr Flay said the work was a commentary on the nature of time.

"The age of stones makes our existence seem really insignificant and my own mortality in the context of the lifespan of these stones sort of puts everything into perspective.

"So I break the stone into small pieces and reconstruct it as kind of a mark making process on that stone, but reconstructing it into a new form which will then carry on."

Flay admitted he'd had some interesting reaction to the work especially from children who wonder how it remained upright (via a steel rod for those who need to know). 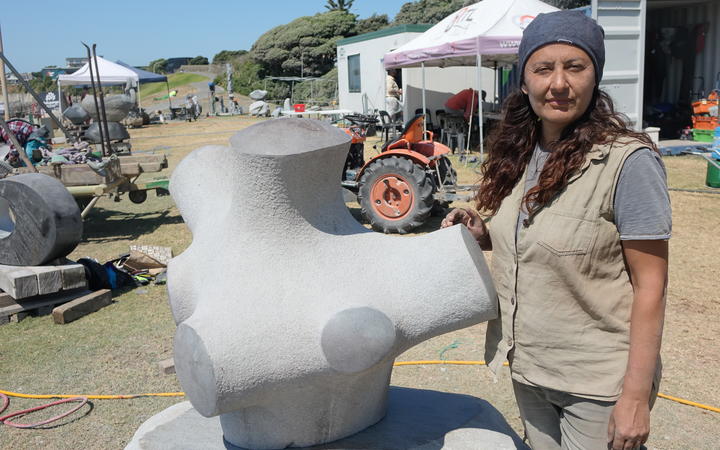 The artists are required to finish their works 24 January before the site is thrown open for public viewing ahead of an auction on 1 February.

Last year the most expensive piece sold for $17,000 of which the artist retained 80 percent while Te Kupenga collected the remainder as commission to go towards running the next event.