Twenty people have been injured after a bus rolled while travelling along the Glenorchy-Queenstown Road this afternoon. 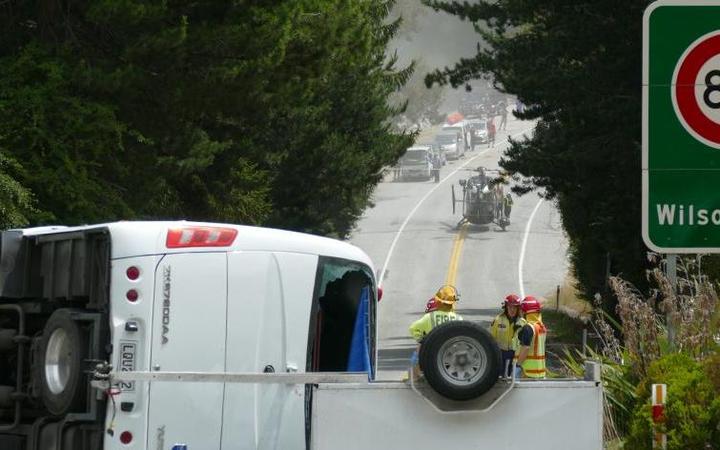 The bus rolled about seven kilometres south-west of Queenstown at about 1.45pm, blocking the road to the south of Closeburn road.

A St John spokesperson said two people were in a serious condition, another person had moderate injuries and 17 others had minor injuries.

The two seriously injured patients were airlifted to Christchurch or Dunedin hospital.

Two helicopters and three ambulances have arrived at the scene of the crash.

St John territory manager David Ballie said all the people were out of the bus by the time emergency services arrived, but people were distressed.

"As you'd understand it's an emotionally very charged thing ... with the number of people being involved, it's quite a serious incident for all those involved."

Otago Lakes Area Commander Olaf Jensen said two people had been airlifted to hospital in serious condition and two others on the bus were taken to hospital to be treated for less serious injuries.

He said there were more than 20 foreign nationals on the bus.

"I want to highlight the good work by the members of the public who were first responders on the scene, who helped those involved until emergency services arrived," Jensen said.

Tour company Awing Travel NZ confirmed it owned the bus, although it said the tour group had booked through a separate travel agency.

The Serious Crash unit and the Commercial Vehicle Safety team have been informed.

Motorists were advised to avoid the area. The Glenorchy-Queenstown Road was expected to remain closed to make way for crews and heavy lifting equipment to right the bus.

The road had reopened by about 8pm.