A young Auckland University student has realised a dream - creating an "Earth sandwich". 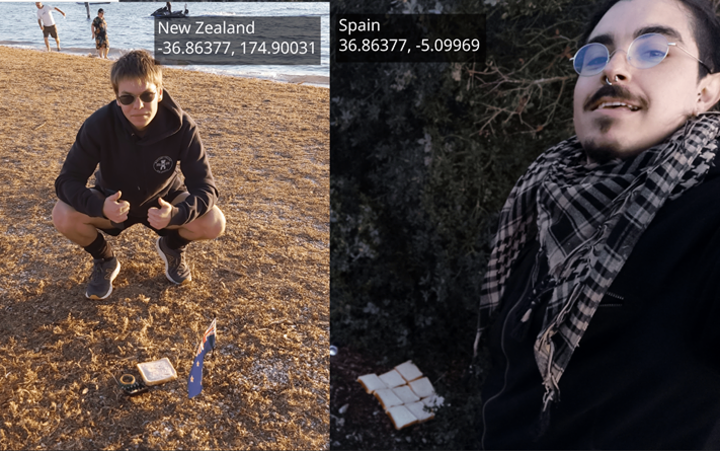 Etienne Naude and a counterpart in Spain have placed slices of bread on precise points, either side of the planet, 20,000 kilometres apart.

The men used longitude and latitude to make sure they were precisely opposite.

Naude told Morning Report he did it because he had the ability to do it - that, and university holidays aren't very exciting.

One piece of bread that makes up the sandwich lies on Auckland's Bucklands Beach, the other piece in Spain, placed by a counterpart Naude found in a subreddit.

"It's amazing that we've actually been able to collaborate and do something like this at exact opposite points of the globe," Naude said.

"We made sure to get the exact location with Google Maps, to get us within a few metres range, and then we used the actual image data on Google Maps to pinpoint ourselves even closer than that."

Just to make sure all the hard work didn't go to waste because of human error, nine pieces of bread were laid down on the Spanish side.

The first "Earth sandwich" is credited to the American artist Ze Frank, who organised two slices of baguette to be placed in New Zealand and Spain in 2006.

Others have since followed - although not all reported examples have been bona fide, opposite-point Earth sandwiches.

Naude's now made it even easier for others to realise their Earth sandwich dreams.

"I'm very excited to announce that we've got a new subreddit that's been created ... where anyone can go try find somebody to make an Earth sandwich with."

The scientific name for points opposite each other on the Earth's surface is antipodes - a term sometimes used to describe New Zealand, as it is roughly opposite the UK.

According to World Atlas, only around 15 percent of "territorial land" is antipodal to other land.

The UK, Australia and most of the US do not have antipodal land points - the other side of the world is water.